Crawfish and rice: A winning combination for Louisiana 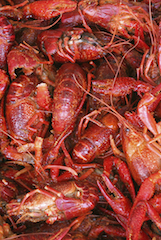 The tremendous growth of crawfish farming in this southern state can be attributed to its partnership with rice.

Crawfish has been synonymous with Louisiana for many years. Indeed, Louisiana crawfish

makes up 90% of all the crawfish produced in America.

What some people don’t realize is that rice farming is the main reason for the growth of this industry over the last few decades.

The concept of combining rice farming and crawfishing started in the 1950s and 1960s when the Louisiana Department of Wildlife and Fisheries initiated research on raising crawfish in small ponds. Soon after, rice farmers began to grow them in their own fields, realizing that they could raise them throughout the year without interfering with their rice crops. In the mid-1970s, only 44,000 acres of land were dedicated to this form of aquaculture. Today, that number has reached 144,000 acres.

Because of this, rice farmers today now have an extra revenue source. They can sell to local docks and stores like their commercial fisherman counterparts. There’s always a high local demand around Mardi Gras and Lent. The internet is another option and online stores like Cajun Grocer sell live and boiled crawfish to customers throughout the United States.

This combination also has positive environmental implications for Louisiana. Rice farming has helped put cleaner water back into the Gulf of Mexico. One crawfish farmer based in Vermillion Parish near the Mermentau River explained to the USDA that the rice fields serve as a filter to remove sediment and nutrients from surface water, leaving the water cleaner than when it first entered the pond. In this farmer’s case, the water leaves his land and then goes into the Mermentau River, which eventually ends up in the Gulf of Mexico.

It could also soon play a role in restoring the state’s whooping crane population. Recently, whooping cranes have been reintroduced to Louisiana, and research by the LDWF has found that whooping cranes like to spend time in crawfish/rice farms. The LWDF is interested in working with these farmers to ensure that the cranes stay safe.

Scott Courville is a digital marketing specialist for Cajun Grocer, an online store for live crawfish and other Cajun foods. It’s based in Lafayette, LA.