Crayfish farming taking root in BC 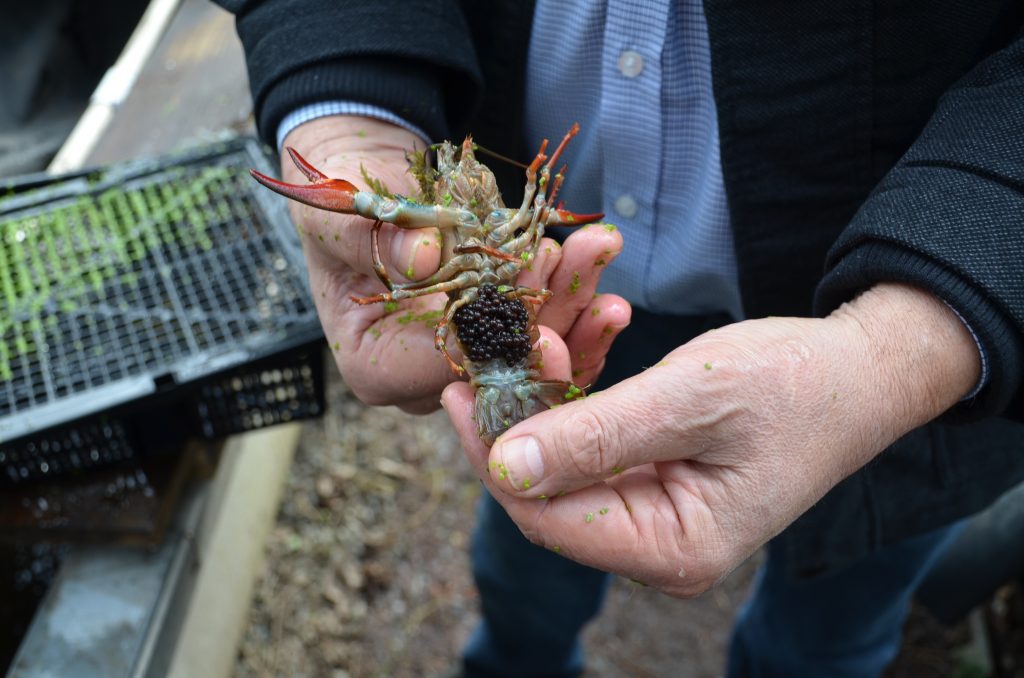 A mature berried female from Djuric’s broodstock. The red on the underside of the claws identify the Signal crayfish

Zeljko Djuric reaches into the chilly 5˚C water and brings out a small plastic cage. He deftly lifts the lid and nimbly grabs a small crustacean mid-body to avoid the waving pinchers. “Look at how healthy they are,” beams Djuric as he turns the berried female over to reveal a belly covered in eggs.  “You can tell by the clean and bright exoskeleton and the way they hold their tails up.”

It’s a local freshwater Signal crayfish (Pasifastacus leniusculus), indigenous to Vancouver Island, BC and Pacific Northwest lakes and streams.   “The food of nobles,” Djuric notes.  Crayfish can fetch up to $150/kg in European markets, he says.
Local, minimal water use, sustainable feed, low environmental impact and high market value would make the Signal crayfish an ideal candidate for aquaculture. Indeed, it is farm-raised in Sweden (from imported North American stock) and other European countries, but not in Canada.

Djuric hopes that a recent startup with a local First Nation will help him move into commercial production.  Together with members of the Malahat nation, located some 50 kilometers north of Victoria, BC, Djuric is working to install a juvenile rearing and pond grow-out system on Malahat land.

“The Malahat nation are always looking for economic opportunities that they can do in their community,” explains Marguerite Parker, Director of Development with the Aboriginal Aquaculture Association in BC.  “They had land that was suitable for crayfish development.”

“Funding through the Aboriginal Aquaculture in Canada Initiative was available for project-based, community aquaculture,” explains Parker. “This was one of six projects in the Western region that was recommended for funding in 2017.”  The Malahat nation put in funding of their own and is in partnership with Djuric’s Asturia Aquaculture, which is providing technical support and supplying juveniles for growout.

Djuric, who is directing the project, says the limestone content of the water at the former cement quarry at the Bamberton site is important for rearing the crayfish.  “Correct calcium levels and a high Ph are a necessity for crayfish,” he explains. “We are using gravity fed flow-through technology,” says Djuric.  Water comes from a lake several hundred meters up a steep hillside and does not require filtration.  A converted shipping container will house the juveniles to be raised in standard Capilano aquaculture troughs.  The adjacent grow-out pond is about one-third of an acre.

Also a stonemason, Djuric has built a rock wall to create an artificial waterfall that tumbles oxygen into the water.  “Crayfish are prone to air bubble disease,” warns Djuric, giving credence to the gravity fed system.   The pond will hold cubic-meter-size growout pens.  “We can have up to 1,000 crayfish in each pen,” says Djuric, adding that if the chemistry and feed is correctly balanced, the crayfish do not live up to their cannibalistic reputation.  “When they are happy they don’t eat each other,” he explains.

Water from the pond will circulate through an artificial wetland containing watercress and other aquatic plants that will act as a filter before discharge into a nearby stream.  The watercress can be cultured year round in the mild southern Vancouver island climate and it is sold to Victoria and Vancouver restaurants for about $15.00/lb, says Djuric.

He gathers wild broodstock from lakes on Vancouver Island to produce juveniles in his hatchery about 20 kilometers away, in Chemainus BC.  “This is like a poor man’s hatchery,” quips Djuric. “It is not  commercial size.”  But the small scale would make an excellent teaching facility, he adds.  The round tanks hold both juveniles and broodstock together.

“We are using all natural feed,” says Djuric. “They are basically scavengers and we are using mostly plant material.”  An adjacent pond is used to culture duckweed (Spirodela polyrrhiza), an invasive species on Vancouver Island, but a key feed ingredient for the crayfish.   A second pond holds growout cages.

Djuric adds that the company is developing diets with Fisheries and Oceans Canada researchers.  “We are working with a multi-trophic system,” says Djuric.  The waste from the crayfish can fertilize the duckweed, which the crayfish eat, and some of the waste supports the watercress.   “Depending on water temperatures, we are looking at two years to growout, post hatch,” he says.
Djuric says he has been interested in crayfish since his childhood in Yugoslavia.  He managed a commercial crayfish aquaculture operation in the Balkans for five years, before coming to Canada 20 years ago to work with crayfish aquaculture for the Canadian government.

The crayfish will be processed in a plant in Nanaimo, about 80 km to the north.  Initial markets are high-end restaurants in the Victoria and Vancouver areas but their sights are on Europe.  “Aquaculture is something new to the Malahat nation,” says Parker.  “Our hope is always that it will encourage youth to go on with their education when they can see an end goal right there at their village.”