Creative Salmon: In a class of its own 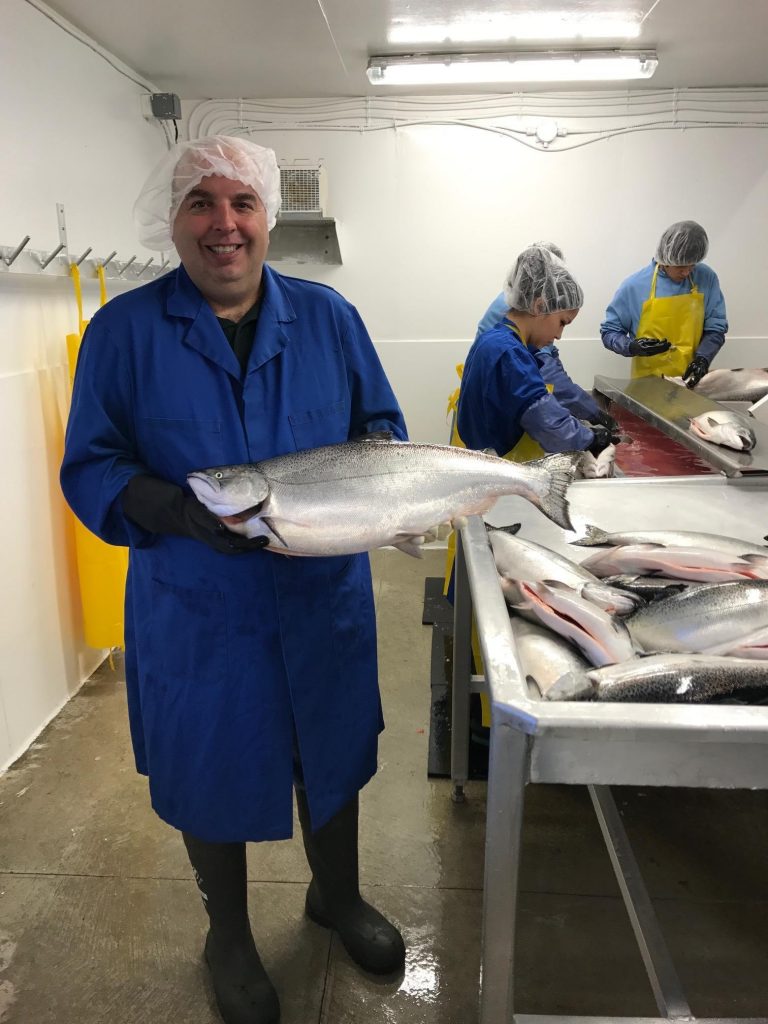 Success is where preparation and opportunity meet. This adage couldn’t be truer than in the story of Creative Salmon, a Canadian company farming Pacific Chinook salmon in Tofino, British Columbia.

Over 20 years ago, a time when organic food was inextricably tied with wealth and no organic standard for seafood existed in Canada, a group of like-minded seafood farmers banded together to create the Pacific Organic Seafood Association. One of them is Creative Salmon, which at that time was under the leadership of the company’s first general manager, Bill Vernon. Over the next 15 to 18 years, Creative Salmon began shifting its practices to organic methods. By the time the Canadian Organic Aquaculture Standard was released in April 2012, the company was ready.

“By then we were well suited to meet all the requirements. We got certified to the standard in December 2013,” says current general manager Tim Rundle.

Rundle is first to admit that organic farming is not easy. Compared to conventional farming, fish raised under organic standards are provided added space in the pen enclosures. The Chinooks, known to be more aggressive than their Atlantic cousins, swim freely because there are fewer of them in the pen, but it also means lower harvest volume. For Creative Salmon, that is 8 kg of fish per cubic meter maximum, although organic standards allow up to 10 kg of fish per cubic meter. Density in conventional farming could be from 20 to 25 kg per cubic meter.

“Density is the main requirement for organic. We don’t split down as the fish grow larger so the number of fish we start with in the pen is the number we want at harvest time,” says Rundle.

In the feed ingredients, there are certain rules around what’s allowed and what’s not under organic standards, says Rundle. Non-use of antibiotics is also key in organic farming.

Creative Salmon has stopped using antibiotics in market fish since 2001. “In the early days we treated our Chinooks with antibiotics at the hatchery and again upon delivery at the site. It became a standard practice we thought necessary to maintain health. Around 1995 we started to question that practice. We asked ourselves whether it is something that we still needed to be doing,” he says.

In 1996, the company conducted an experiment. It raised 10,000 fish in two pens drug-free. “We got over 90 percent survival in our drug-free trial group. After additional trials we realized we do not need to use antibiotics the way we were using it.”

Rundle says further eradicating the need for antibiotics was the improvement in vaccines, which addressed the biggest issue fish farmers faced back then — vibrio. Husbandry is another factor that helps, he says. “When you have very low density and low stress, that helps the fish remain healthy. If we got more intensive we might have needed to use antibiotics. But, of course, if we had to use antibiotics, if there’s a suggestion from our vet, then we would have to use it although it would mean we would lose our status as an organic farmer. Fish welfare is our priority.” Today, the company uses antibiotics only in its broodstock, which require more handling than market fish and are not sold in the marketplace.

Creative Salmon’s farming practices also involve fallowing its six site tenures alternately — four are stocked with fish at any one time while the other two are left alone to recover.

Farming the niche species is more challenging, notes Rundle. “We can’t handle our Chinooks, we basically put them in and give them a lot of space, not sort them, not grade them. We leave them alone until harvest time.”

The very first farms started by Canadians (family farms) in the early and mid ’80s focused on the local domestic salmon — Chinook — and to some extent, Coho, also native to British Columbia. By the mid- to late-’80s some of the early BC farms were bought by Norwegians who saw market opportunities in BC.  The Norwegians were familiar with growing their own Atlantic salmon and so imported eggs from Norway and Scotland to grow them in BC. During these pioneer days when family farms started shifting to Atlantics, Creative Salmon remained loyal to Chinooks.

Rundle acknowledges that farming the species can also be expensive, more so when the organic aspect is added to the equation. The company’s operations — from producing its own broodstock and smolts to raising and harvesting the fish and processing them — are audited yearly. “We are required to have an Organic Plan that outlines specifically how our company’s practices meet the organic requirements, then an obligation is to audit to those requirements each year through an independent third party so we are always reviewing our practices, reminding staff of the requirements, and training people new to the company.”

There are cost considerations in maintaining the company’s organic status, but there are obvious rewards.

“Chinook is definitely tougher to grow but we see it definitely a niche in the marketplace. And the organic aspect takes that to another level,” says Rundle.

“Demand is very high,” he adds. “Our fish has a great taste, great flavor. And Chinook salmon is really sought-after; it is one of the most-sought-after sport fish so there’s definitely very high demand for our product. Being organic has really helped out in putting it into more places than a commodity product could get to.”

Creative Salmon distributes its production across Canada, which accounts for roughly 20 percent of its overall market. The majority, 60 percent, goes to the US market, while another 20 percent goes to Japan.

In his roughly 25 years in the industry, Rundle has seen the market for organic produce grow, become more sophisticated and more trusting. “In the early days there were definitely more questions from consumers. When we were marketing ourselves as the natural choice, we had to tell the story about the low density, the feed, but now I find the discussions are shorter because there’s a lot more trust in the organic.”

Consumers will only demand more ethically produced and chemical-free food so Creative Salmon is happy to keep things the way they are.  Looking back, Rundle knows it was all worth the effort, as Creative Salmon today is in a class of its own, being the only organic salmon producer in Canada and the rest of North America. “We’re keeping the status quo,” he says. “We’ve got a really great market.”

Creative Salmon operates in the traditional territory of the Tla-o-qui-aht First Nation, which the company considers as “one of our most important neighbours and stakeholders.”

In 2013 the company moved to a “fish farm committee process,” involving quarterly meetings between Creative Salmon representatives and chiefs of the Tla-o-qui-aht.  “We’re operating in Tla-o-qui-aht traditional territory so it’s important to have open and honest relationship,” Rundle says.

While the company has the support of the Tla-o-qui-aht chiefs, not all members approve of salmon farming, Rundle admits. “There are members that still don’t like what we do but there’s a communication line.”