Cedar Crest Trout Hatcheries lies in Hanover, Ontario, Canada, at the base of the Bruce Peninsula, in the heart of Ontario’s rainbow trout (Oncorhychus mykiss) fingerling production area. This location is perfectly placed to ship fish to Cedar Crest’s primary clients on Lake Huron. In truth, Cedar Crest is four closely placed hatcheries, making Cedar Crest the largest producer of fingerlings in the province. Between the four locations, Cedar Crest produces more than seven million fingerlings each year. 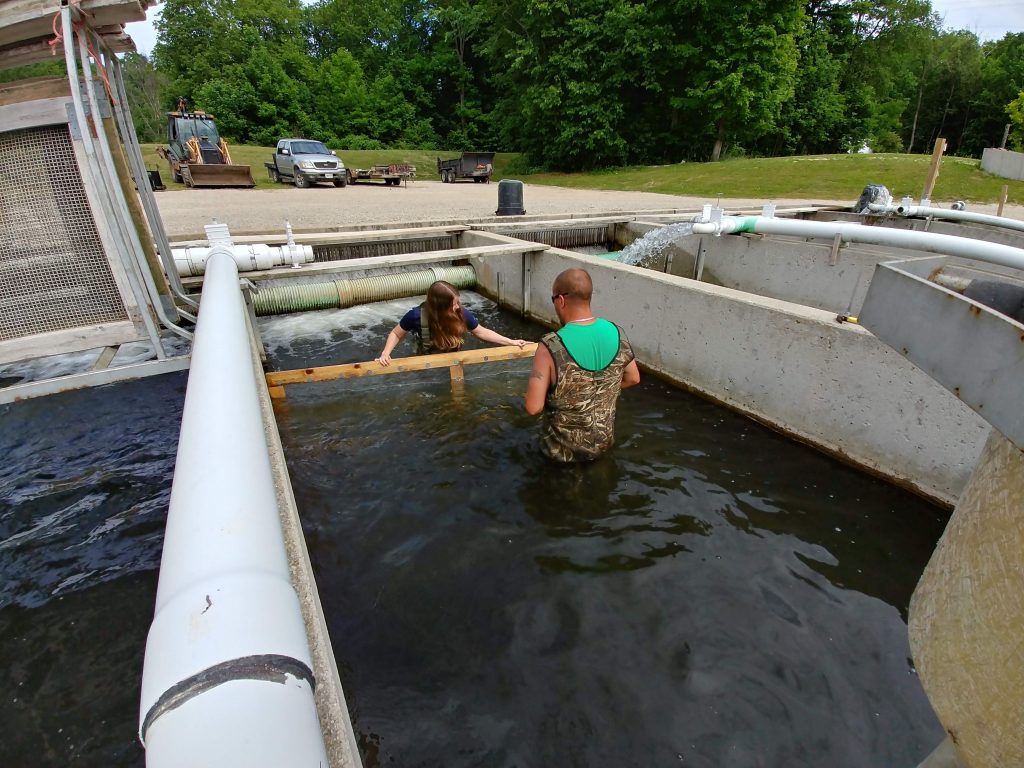 For a company with such large operations (about 80 per cent of the Ontario fingerling market), Cedar Crest is at heart a small family-run business. Jim Taylor founded Cedar Crest in 1986, and after an exhausting permitting and building process, he opened the hatchery in 1995. Jim and his wife Lynette have now retired. Cedar Crest is now run by their daughter Arlen and son RJ.

In 2011, Cedar Crest bought two other nearby hatcheries and a year later, the fingerling industry began to explode in Ontario. In 2014, Cedar Crest purchased the Spring Hills Hatchery. The company’s sales increased 412 per cent in the period between 2012 and 2017, largely due to demand from expansion of aboriginal net sites on Lake Huron.

Growing pains
Although the acquisition of new sites allows Cedar Crest to expand its output, there’s always a catch when you acquire a facility. “Three dinosaurs that needed a heavy dose of evolution,” is how Arlen describes what she purchased, though they all had good bones. Arlen’s partner Mike heads up the building and updating projects designed to ‘evolutionize’ these dinosaurs.

Antiquated practices and technology must all be modernized and mechanized to raise efficiency at the hatcheries. Purchasing higher level equipment, like mechanical graders, to drop costs has allowed Cedar Crest to further scale up.

Genetics
Cedar Crest raises different strains of trout with different characteristics, allowing customers to choose their stock to match their environment. It has six strains of its own brood held at the Cedar Crest facilities, and combining these strains to produce hybrid fingerlings is at the core of its business.

Hybrid vigor increases the performance of the fingerlings by crossing the lines of distinct isolated strains, providing robust fingerlings. Each customer gets a specific hybrid that is known to be successful in their area. Based on the years of experience providing fingerlings, Cedar Crest can match the genetics of their fish to the customer’s farm to provide the fingerlings most resilient in that setting. Unlike most broodfish, the brood at Cedar Crest receive no special treatment. They live in the raceways instead of their own climate controlled environment and experience the fluctuations in water temperature and water quality the same as the other fingerlings.

“We want our brood groups to be hardy,” says Arlen. “They need to be accustomed to high temperatures and low temperatures, and they need to experience flow through water from the natural source to promote a strong immune system. We find trout raised entirely in a RAS before lake entry do not perform as well.”

“We promised our long-time customers that no matter how big we get we will always look after the pond stockers and small, land-based companies, so that’s what we do,” Arlen notes.

Future growth
“Our biggest challenge going forward is to step up as fingerling producers.” Huge growth in native band net sites on Lake Huron since 2012 has greatly increased the demand for rainbow trout fingerlings in Ontario. Continued growth is expected in this sector thus, the fingerling producers must get the most out of their facilities and fish groups.

Cedar Crest looks to further expansion, currently looking for a new site as well as to continually add to their existing farms to keep up with an expanding Ontario industry.