Family businesses are sometimes vulnerable to inertia, but not the Fish Breeders of Idaho. Ask founder Leo Ray where he imagines his catfish, trout, tilapia, and sturgeon farm will be in a decade and he’ll tell you the freshwater aquaculture business will be adding to its species list and still be run by his family. 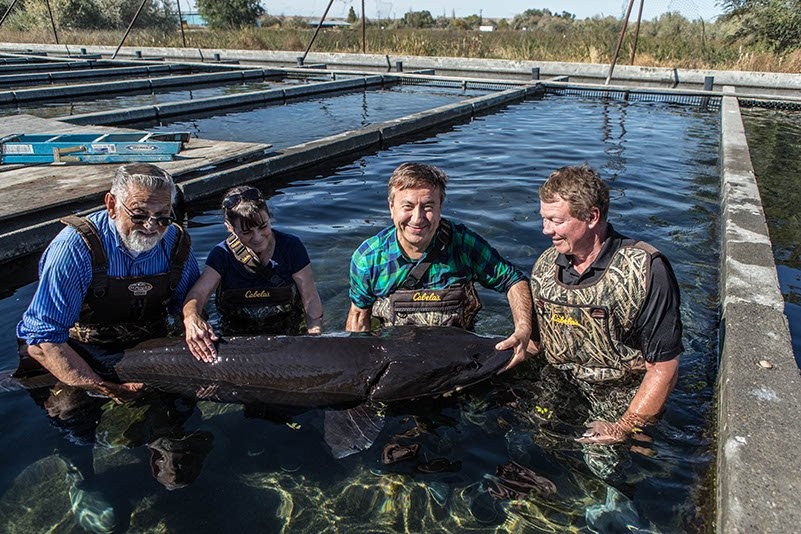 “The biggest change in my life is witnessing the decline of small business,” Ray, who will be 80 years old in December, told Aquaculture North America (ANA). “My son works with me now and some grandchildren plan to come back and run the business after college.”

Fish Breeders of Idaho initially got its start in the Golden State of California in 1968 under the name Fish Breeders. Leo and his wife Judith started with catfish but by 1973, they had moved to Idaho where the artesian geothermal spring waters and abundant cold water springs offered the catfish farmers the opportunity to diversify their production to other species. The new company became Fish Breeders of Idaho.

By 1975, after tweaking his catfish farming to include warm geothermal water flowing through concrete raceways that enabled high-density production and temperature control, he expanded into tilapia farming.

Ray claims the best thing he did was to use his fisheries degree from the University of Oregon and continue to use the national university system for research and technology transfer to expand his species production.

Ever since he was a kid, he said he always worked with wildlife. After college he thought he would work with fish in the government fisheries area. As a grad student, he focused heavily on catfish hormone reproduction. There’s no surprise that he went ahead and started with catfish.

Today Fish Breeders of Idaho includes subsidiaries Big Bend Trout and Fish Processors. Obviously, Ray knew early on it was a good business model to control his own supply chain from production to processing.

“The catfish industry is a model of how aquaculture species production is supposed to work, from researchers, government, to farmers,” he explained.

When he discovered and then moved to the Thousand Springs Area in Idaho near the town of Hagerman, he was attracted to the natural flowing coldwater springs and warm geothermal artesian springs. With an eye toward sustainable farming techniques, he knew using pumps wouldn’t be necessary, saving costs, protecting natural aquifers and limiting air pollution.

Farming his fish in concrete raceways uses water but doesn’t consume water, he claims. After the fish farm uses the water it is available for other purposes, including irrigation, organic fertilizer and, during the winter, duck resting areas.

The company’s white sturgeon use the same water delivery system as the trout and help clean the raceways by eating accumulating vegetation. Approximately half of the sturgeon feed is natural organisms growing in the system, the company explains on its website.

In 2003, the company was chosen to produce rainbow trout according to sustainable food production standards required for sale in the Whole Foods Market national store chain.

Under the Whole Foods Quality Standards, trout farming operations operate under inspection and certification protocols, according to Whole Foods and Fish Breeders. The farm staff controls the entire process from egg through growout. Orders for the trout, either as dressed, boned, or filleted, come from Canada and the United States.

In 2004, the family fish farm debuted Idaho Caviar, which is prized in the region by local chefs and media foodies. And this year, as ANA reported, the fish farmer announced it is converting raw fish guts into fish feed, a move that not only makes use of what is deemed as a “worthless waste product,” but also save him roughly 30 percent in feed costs.

Ray obviously is one not to rest on his laurels. He and his son Tod, who is Vice President of sales, are now looking to expanding their offerings to include aquarium species and minnows.

“I look forward to working on the fish farm as long as I can and then handing it off and getting out of the way of my grandchildren,” he said.