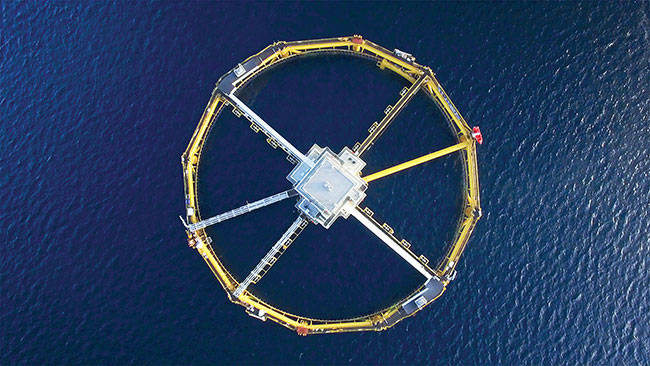 Norwegian salmon farmer SalMar expects most of the growth in its production volumes in the years to come will be from offshore farming. Bird’s-eye view of SalMar’s offshore fish farm, Ocean Farm 1 Credit: SalMar

Offshore salmon farming is still in its infancy but the potential entry of another player in the field shows interest is growing.

Salmon farmer Scottish Sea Farms is planning to build an offshore farm to add to the production volumes from its existing 42 near-shore farm sites.

The salmon farmer says its search for ideal farming locations over the years has widened to include the potential of more-exposed locations. While farming in such locations is subject to roughest sea conditions in the world, it also avoids many of potential conflicts with other user groups, such as fisheries or tourism.

If approved by Scotland’s regulators, it will be the country’s first offshore salmon farm and the third worldwide.

The world’s first such farm is in Norway and is operated by SalMar’s fish farming subsidiary SalMar Ocean AS. Ocean Farm 1, as the fish farm is called, started operations in November 2017 and is now on its second production cycle.

“We achieved good biologic results on the first production cycle on Ocean Farm 1 and harvested fish of fantastic quality. For us, this was a major milestone and confirm that offshore farming truly is a sustainable production on the terms of the salmon,” said Gustav Magnar Witzøe, co-founder, president & CEO of SalMar ASA.

Witzøe further said there was no need for any sea lice treatment on Ocean Farm 1 in nearly 1.5 production cycle.

“There’s a great potential for offshore farming in the open sea, out in the ocean current and outside of the negative implications of the current – of the coastal current. SalMar aimed to lead this development and believe that most of our volume growth will come from this area in the years to come,” he said.

The world’s second salmon ocean farm is in China. Called The Deep Blue No. 1, the farm is in its early stages in the Yellow Sea, where the cold water is believed to be a suitable habitat for the fish.

Scottish Sea Farms’ plan is still on the drawing board and discussions with local regulatory authorities are underway. The company acknowledged it needs “an engaged, robust and forward-thinking regulatory framework” that will enable Scotland’s salmon farmers to continue growing responsibly. This would help the sector reclaim its competitiveness on the world stage, said its managing director, Jim Gallagher.

The world’s oceans cover more than two-thirds of the world’s surface but aquatic food for human consumption accounts for only 2 percent. A scientific paper called “The Future of Food from the Sea” says farming seafood in the open ocean could contribute significantly to food production but the right policy support, incentives and feed alternatives are needed to expand the segment sustainably.