The Taylor family’s history of growing shellfish in Washington State goes back as far as 1890. Under the umbrella of Taylor Shellfish Farms, the family business has evolved into a successful aquaculture company with diverse products and production methods. Bill Dewey, director of public affairs, says that diversification has been the key to the company’s success. 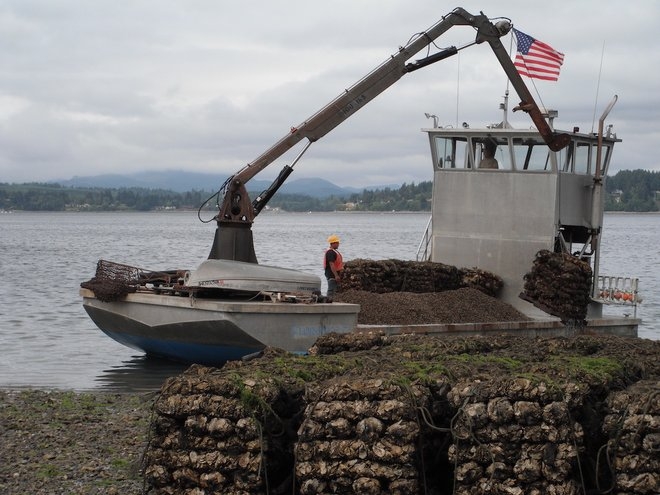 “In the last 25 years, they’ve dramatically grown the business, a lot of that due to the opportunities afforded by hatchery technology,” says Dewey. “We built our first hatchery in 1989; that’s really fuelled the growth and diversification of the company, as we’ve been able to produce seed for a variety of species, stock our farms and make them more productive. The company grows by starting new farms and acquiring other farms. We’ve diversified geographically and by species and by market. I think at this point, we’re probably the largest producer of farmed shellfish in North America.”

Taylor Shellfish’s offerings are wide ranging. The company produces 4-5 million lbs of Manila clams per year, which started as beach culture but has evolved to include mechanized farming techniques. Dewey is particularly proud of a tulip harvesting machine that he obtained and reconfigured into a Manila clam harvester for use on his own farm. Taylor Shellfish has since taken the same design and used it to develop their own harvesting machine. Along with mussels and geoducks, the company also grows several types of oysters using a variety of techniques.

“We grow them on tidal long lines,” says Dewey. “We do bag culture systems, off-bottom as well. Our BC farm has quite a bit of deep water suspended culture. You name it. We have a high diversity of culture systems and it’s constantly evolving.”

Dewey says that while the company has purchased many other operations, it has been largely based on opportunities – they have no craving for a monopoly. The 2007 purchase of British Columbia’s Fanny Bay Oyster Company, for example, allowed the company to obtain more farms and a processing plant and put them in position to establish another retail shop/oyster bar. Dewey says that oyster bars evolved into a small but important facet of their business over time. Initially, the company was selling products through farmers markets in Washington.

“The gentleman who was doing those markets for us had some health issues and, it turns out that the farmers-market trade really hinges on the personality and who you have doing them,” says Dewey. “We really struggled after his health issues and decided to make a foray [in 2011] into a retail store in downtown Seattle. We started opening oysters for people in the retail stores and had a few tables and chairs and that became popular pretty quickly so we put in a few more tables and chairs. Before we knew it, the demand was overwhelming the store, so we got a beer and wine licence and then there were lines out the door. We saw the demand for a tide-to-table experience.”

Along with the bar in Vancouver, Taylor Shellfish also runs three oyster bars in Seattle; a fifth bar is under construction in Bellevue, Washington.

“It’s only a relatively small percentage of our overall production, but it’s a higher profit margin area and a great way to have direct interaction with your customers,” says Dewey. “They enjoy it and we do as well.”

The diversity of products, techniques, locations and markets is the key to the company’s success, says Dewey. In addition to growing a variety of products in a variety of locations, they also sell to varied customers – Taylor Shellfish exports to at least a dozen different countries and have their own distribution center in Hong Kong.

“All that diversification tends to build stability into the company,” says Dewey. “You can have market slowdowns on one species or a price drop because of competition, but you’re buoyed up by the other species. You could have red tide or vibrio pollution closures in one area, but you still have lots of other areas while you work to get those areas re-opened.”

Another key to success is vertical integration – having hatcheries, nurseries, farms, retail and distribution all under the same umbrella, says Dewey. It ensures that a variety of steps in the supply chain are all on the same page. The company also owns or leases roughly 12,000 acres of tidelands in Washington State.

Members of the Taylor family themselves are another X factor, according to Dewey. For 25 years he’s worked with the family who, he says, are extremely passionate about the business.

“They eat, sleep and breathe it,” says Dewey. “They’re thrilled by the challenge. They’re constantly evolving in response to it, whether it’s market evolution, culture system evolution, they’re doing things differently all the time. We work in a very dynamic ecosystem that is constantly throwing curve balls at you. We’re just trying to be flexible and constantly work on trying to figure things out and get better at it. They don’t get stuck in their ways.”

“They definitely have plans to keep doing this and growing the business,” says Dewey.