Diving into the sea urchin market 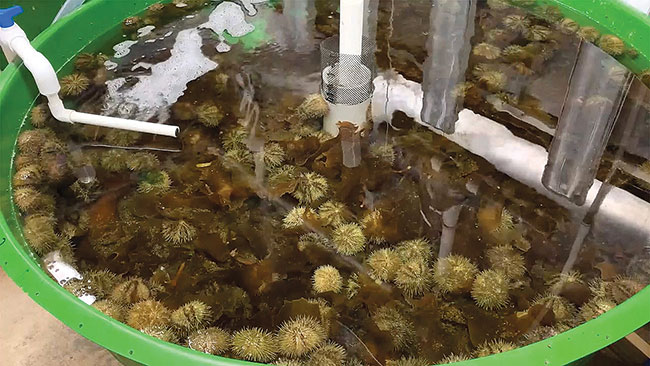 Green Sea urchin broodstock at the Cooperative Agriculture Research facility will provide seed to David Quinby and other farmers in Maine Photo: CCAR

Looking to diversify his operations, David Quinby of Ocean Resources Inc. in Sedgwick, Maine, hopes sea urchins will provide a new and profitable product for cultivation.

Ocean Resources supplies wild starfish and urchins for the educational and scientific market.  But, “like everyone else, I’m very interested in aquaculture,” said Quinby.

He is seeking approval on an application for a 20-year, 2.96-acre lease in the Jordan River between the towns of Lamoine and Trenton near Bar Harbor, Maine. His goal is to harvest green sea urchins and American oysters, which will cohabitate together in cages. Urchin seed will be provided by the University of Maine Center for Cooperative Aquaculture Research.

“We would like to put 90 cages down right at the beginning – that was the University of Maine’s idea. They want to try density experiments. A cage will be three-feet by two-and-a foot high – the size of a standard lobster trap. We’re hoping to place 150 urchins in 30 cages and track the growth rates of those,” says Quinby, who is confident he will get approval for the lease.

Unfortunately, the approval process has been delayed because of the pandemic, but Quinby, who has had an experimental lease, is confident the approval will go through.

His application indicates there will be a maximum of 900 cages on the bottom of the tidal river when fully realized.

Quinby has harvested wild urchins for the scientific market and sold them to the Japanese market in the past. In this new project, they would be sold for their roe content as sushi, or for classroom and scientific use. The oysters would be sold as seafood.

The State of Maine has tried to restock urchins but have never caged them. Lobster traps stay on the bottom and are readily available.

“I can see some ways of altering the traps – it has to be a cage that will be easier to keep clean,” Quinby says.

Japan consumes about 80-90 per cent of the total global supply of sea urchins, according to a 2017 report. The worldwide supply of wild sea urchins has diminished over the last few years.

From seed to mature market size, Quinby hopes to have market-size urchins in two years and estimates his first harvest will be in 2023.

“We have a good growth rate with urchins, but they can take longer,” says Quinby. “We’re learning all the time. We’re committed to keeping everything on the bottom, but once we turn them loose, they are part of the landscape. Some of them wander out, but as long as you keep most of them, you should be okay.”