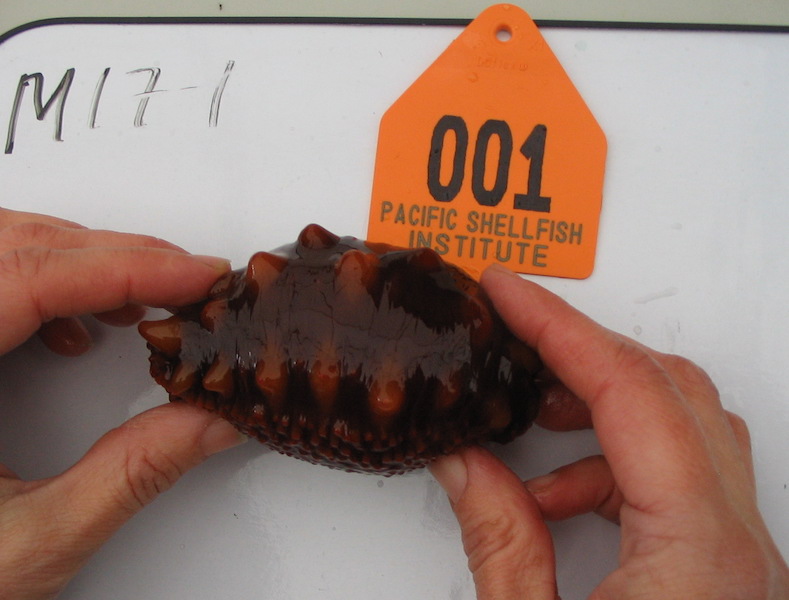 Indeed, the one indicator of the decline was when Washington State initiated a license buy-back program in 1999. The depletion of resources became notable again in 2014, which saw the first-ever closure of the wild fishery in Puget Sound.

The strong demand and limited supply makes sea cucumber a good candidate for aquaculture. Suhrbier estimates an average of $4 per pound landed price for the dive fishery.

“We are in the early stages of a long process to develop full-scale aquaculture in Alaska and Washington,” Suhrbier says. “We are working with both hatchery-raised and wild-caught juveniles, following research work that began in British Columbia.”

Divers collect wild broodstock near the hatchery at the Kenneth K Chew Center for Shellfish Research and Restoration in Manchester, Washington in late winter (February/March). The broodstock are kept in tanks with ambient flow-through seawater and fed almost exclusively on the algae growing on the tank walls.

“Once per week, the algae is scrubbed off the walls and allowed to settle out so the sea cucumbers can eat it,” explains Ryan Crim, project manager at the Chew Center.  “To supplement the supply, algae is scrubbed from additional tanks and transferred to the broodstock tanks.”

“Beginning in late spring (May) we start efforts to induce spawns via a thermal shock (~5C above ambient) in a group of about 20 animals,” says Crim.

But getting consistent spawn is a problem, explains Crim.  “Sea cucumbers are dioecious (sexes are separate) but are not sexually dimorphic and so there is no way to identify sex until the animals begin to spawn, aside from taking a biopsy of the gonad. Therefore when we select animals for spawning, we have no way of guaranteeing we are choosing an equal mix of males and females.”

He added: “In addition, sea cucumber gonadal development seems to be fairly asynchronized and assessing ripeness is not possible by visual examination. This makes it difficult to select the ripest of animals for spawning.”

The second challenge is having larvae survive through metamorphosis in large-scale cultivation tanks.  “We have had success getting larvae through metamorphosis in small static research-scale containers mimicking standard techniques,” says Crim.   “However, larval mortality has been high in our flow-through conical tanks.  We believe we can overcome this hurdle by modifying our larval culture systems to rearing in static conditions this summer.”

“Producing juveniles is our bottleneck in Washington,” says Suhrbier, adding that work at Alutiiq Pride hatchery in Alaska has led to successful juvenile culture.

Suhrbier says they are testing a variety of grow-out strategies. “In Alaska a nursery-scale experiment was conducted in 2016 with trays hanging off a dock and growth and mortality was tracked,” he says. Future studies are planned in Alaska with collaborators Dr Charlotte Regula-Whitefield and the Southeast Alaska Regional Dive Fisheries Association.

In Washington State, grow-out efforts began early this year. One site is at a mussel farm in Quilcene Bay. Mussel harvesters collected sea cucumbers right before being brushed off in the cleaning gear.  The animals were then measured/weighed/photographed before placing them in cages custom-fitted with a mesh liner to allow for maximum food and minimum escape. The cages are then placed under the lines of growing mussels, a setup that allows mussel waste to go directly to the sea cucumbers below.

“We are also growing them under black-cod (sablefish) pens at a test facility at Manchester,” says Suhrbier. The black-cod feces coming off the net pens settle into the cages and provide food for the sea cucumbers.  “We will be tracking the growth at both sites on a quarterly basis, and measure water quality and sedimentation as well,” he adds.

Because sea cucumbers do not need to be fed in a co-culture situation, farming them this way holds a lot of economic potential. “The economics look very promising as long we can keep labor costs and grow-out times low,” says Suhrbier. He estimates it would take 12-18 months to grow them to a minimum market size.  “Tracking the growth and density during this project is key.”