Research efforts are underway in Canada to look at how epigenetics may have the answer to improving salmon survival rates in hatcheries. 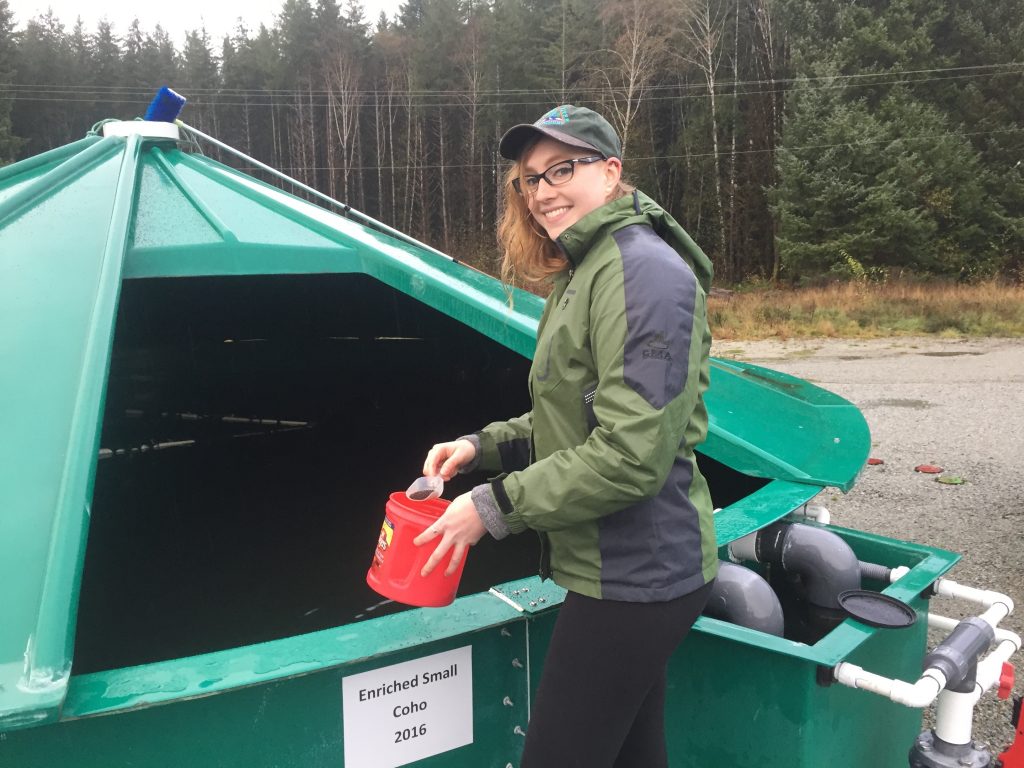 Biologist and University of Calgary masters’ student Jessy Bokvist attends to her experiment looking at the influence of environment on gene expression.

Epigenetics is the study of changes in organisms caused by the modification of gene expression – the genetic code itself remains the same but the way it expresses itself changes. The concept has been studied for some time, however in recent years, improvements in genomic tools and reductions in cost have made it possible to examine these issues in earnest.

Dr. Louis Bernatchez, a biologist at Laval University in Quebec, Canada, says previous research had documented phenotypic differences in fitness between hatchery and wild fish. They demonstrated difference in reproductive success and other markers, but did not show signs of genetic differences.

“It seemed to us that the missing link was the epigenetic control of the phenotypes,” says Bernatchez.

As part of a project called EPIC4 (Enhancing Production in Coho, Culture, Community and Catch), Bernatchez’s team tested for the occurrence of genetic differences between hatchery and wild salmon. They found methyl groups on hatchery salmon DNA, but not on wild salmon. This methylation affects how the salmon’s bodies adapt to salt water conditions.

“We observed pronounced epigenetic differences associated with genes that are important for some phenotypes,” says Bernatchez. “The key observation of the study was that the same epigenetic change occurred independently in two hatcheries. That was a very strong sign that something similar was happening in the hatchery environment versus the wild environment.”

Bernatchez’s team is currently working on testing to see if these epigenetic changes continue later in life, and if they are passed on to offspring. The experimental phase of EPIC4 is in its final year, but Bernatchez says that crunching the data and writing the final papers may take up to the end of 2020.

Biologist and University of Calgary masters’ student Jessy Bokvist attends to her experiment looking at the influence of environment on gene expression.

On the west coast of Canada, a practical experiment looks to test epigenetic theories. Biologist and University of Calgary master’s student Jessy Bokvist is running a test at the Nitinat River Hatchery on Vancouver Island in British Columbia, comparing Coho raised in an environment similar to standard hatchery practices to those raised in an ‘enriched’ environment.

“We provide them with extra environmental stimuli,” says Bokvist. “This stimuli is meant to imitate wild conditions that they would experience if they were actually raised in the wild, and this can involve things like lowering the density of fish within tanks, doing predator conditioning trials. We supplement their feed with krill. And we introduce structures, what I like to call toys, into these tanks, so it’s kind of giving them different stimuli and trying to encourage an element of more of a wild-life phenotype.”

“They’re living in this captive environment that’s nothing like the wild environment, and developing traits that aren’t a good fit to living in the wild,” says Bokvist. “I think using these kind of methods is relatively simple and cost-effective. Our structures are PVC pipes with black netting and it’s really cheap to make, and we just put it in there, and adding that makes them happier. It gives them stimulus and primes them for release into the wild.”

Bokvist hopes that between her efforts, and those of others such as Dr. Bernatchez, by early 2020 there will be a better understanding of how epigenetics influence survival.