BC’s salmon industry is fighting for its future while fending off attacks from activists. We speak to a PR expert about corporate reputation and its impact on organizations

Tense times are challenging day-to-day business as British Columbia salmon farmers await further government action.  While most operations must go on as usual, there is an “elephant in the room” about the industry’s future.

Parliamentary Secretary Terry Beech is preparing an interim report on how to transition from open-net pen farming by 2025.  According to a press release, it will be presented to Minister Bernadette Jordan later this year and will reflect findings from virtual roundtables conducted during February and March with the aquaculture industry, First Nations in BC, and environmental stakeholders.

This action follows the announcement in December 2020 that licenses for fish farms in the Discovery Islands near Campbell River will no longer be renewed after they expire in June 2022.

As companies manage through such uncertainty, anti-salmon-farming activists have flooded social media.  Their criticism of industry practices, such as farming personnel getting jobs at certification agencies, has spilled into malicious personal attacks on female salmon farmers. While urging civil discourse, the industry and its supporters have emphasized the pro-salmon-farming conclusions of scientific studies — some conducted by the government itself.

So, how do crisis situations and corporate reputation impact organizations?

Aquaculture North America spoke with Cameron Summers, who leads the Toronto office of public relations giant Weber Shandwick.  He has advised private and public sector leaders in a variety of industries, including natural resources.  Tapping both his two decades of professional experience as well as relevant research conducted by Weber Shandwick, he spoke to us about how corporate reputations evolve and what that can mean.

One study published last year surveyed global executives, including leaders in natural resources, about the impact of corporate reputation on business performance.  It found that strong reputations yield not only customer loyalty and competitive advantage, but also better relationships with suppliers and partners and the ability to attract high-quality talent and retain employees.

And the converse is true.  Faltering corporate reputations can have a crippling effect on operations and ultimately shareholder value.

ANA: Let’s start with what factors contribute to an organization’s reputation.

CS: According to our research, there is no single factor that contributes to corporate reputation today. In the past, we would talk about shareholder value as the driver for corporate reputation.  Today, it is built more upon the value of stakeholder engagement and the corporation’s relationships with stakeholders.  So, when you think about it in those terms, it becomes a multifactorial dynamic as much as it is about the products and services a company provides.

It is important for a company to think about how it interacts with employees and the communities where people live and work, how the organization sources what it needs to run its business, and how it works with other stakeholders.

ANA: How do current events come into play?

CS: We need to mention the contextual situation that an organization may find itself in — sometimes fairly or unfairly. So, last year, how organizations dealt with employees during COVID became incredibly important to how the public perceived the corporation.

ANA: How powerful are advocacy groups and the government in influencing corporate reputation?

CS: My observation is that in the natural resources sector, particularly in Canada, there’s a high level of sensitivity to the impact that a stakeholder community can have.  These stakeholders could be the government, investors, and customers.  But what we’ve seen particularly over the last number of years is the importance of stakeholders that perhaps may not have been as considered as before.

Definitely there are laws and considerations in Canada that require a broader consideration of stakeholders. Environmental laws certainly require that. That is an area of some conflict and consternation, but that doesn’t take away from the fact that they are important to organizations.

Particularly in the natural resources space, how companies conduct their business and how they communicate and engage with communities or stakeholders does have the potential to influence how government may deal with them or respond to them. 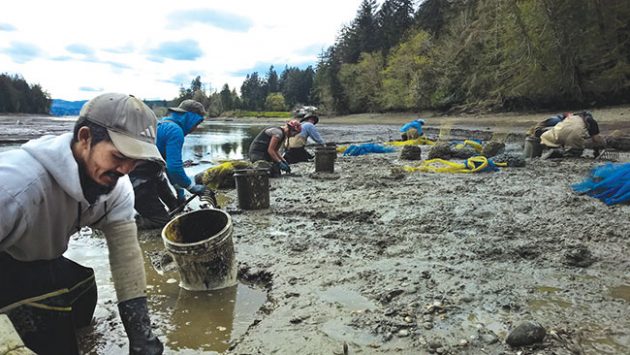 Taylor Shellfish farmers harvest clams. It is a job that requires stamina but offers the beautiful surroundings of the Pacific Northwest
Credit: Taylor Shellfish

ANA: How does corporate reputation evolve?

ANA: What is the difference between brand reputation and corporate reputation?

CS: Brand reputation is about the promise of what you’re offering, whether it is a product or a service.  Corporate reputation goes into the organization that’s behind that product or service.  The public is increasingly looking at that and asking: Do I see myself aligning with that organization and how they behave?

CS: Many years ago, a person might just have said, “I need a job.”  But today, amongst that age group, other factors do play a role.  (See related report on page 28.)

ANA: From your experience in mining and forestry, were there lessons learned that you would ask the leaders in aquaculture to pay attention to?

CS: I always encourage leaders to challenge their own assumptions and understand the perceptions of others. Go forward with a sense of what your perspective is, but have openness to the perspective of others.  That can help you navigate through crises and challenges and manage your reputation effectively.