‘New technologies are pointless if they can’t scale.’ 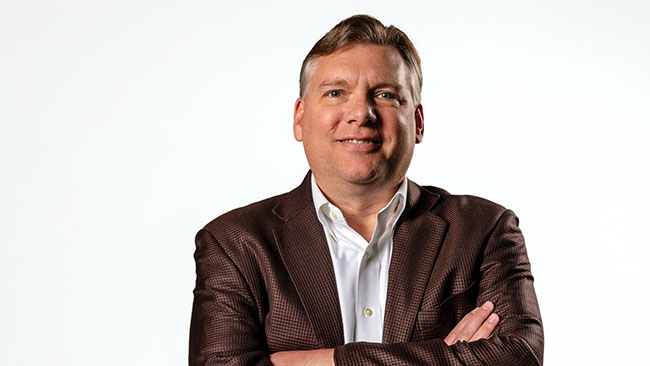 When it comes to innovation, Dr Michael Helmstetter has written in Forbes, “aquaculture is still a decade or more behind other livestock industries.”

Despite the lag, he sees promise. He points to companies, from startups to multinationals like Cargill, which are pursuing fishmeal alternatives. An even greater opportunity may come with new, more efficient ways to deliver vaccines.

Helmstetter is co-founder of TechAccel, a Kansas City-based technology and venture development company that invests in, acquires, and accelerates early-stage discoveries and technologies in agriculture, animal health, and food ingredient sectors.

He received a PhD in Chemical Toxicology/Oceanography from Old Dominion University and a BS in Biology from Allegheny College. Although he spent much of his career gaining expertise in startups and spin-offs, all with technology at their core, he has deep experience in laboratory research. In the 1980s, he ran an aquaculture facility that bred and grew rainbow trout for cancer research.

He thus views the challenge of replacing fishmeal from many perspectives. For example, he has examined alternatives derived from insects, algae oil, and soybeans.

Insect proteins
Insects have received a lot of buzz in the press and capital investment dollars are following. Just in February, Ynsect, a farm in Amiens Metropole, France, announced that it had raised $125 million to help fund its goal of becoming the world’s biggest insect farm and expansion into North America.

But Helmstetter is cautious about insect-based feed. The challenge, he says, is to deliver the scale and competitive pricing the aquaculture industry will require. “There are great opportunities, lots of start-up companies, but the production capacity to match that of fishmeal today is just not there yet,” he tells Aquaculture North America (ANA).

According to the international marine ingredients trade organization IFFO, world production of fishmeal hovered between 4.5 and almost 5 million metric tons (MT) during the last five years. By way of contrast, Ynsect stated that, at capacity, its largest farm to date will produce around 20,000 MT of protein annually.

“There’s a lot of debate as to which alternative feed ingredient is the best, but that’s not really how I see it,” says Enterra’s chief technology officer, Andrew Vickerson. “We are providing a new ingredient, black soldier fly larvae, for formulators to use. Each ingredient has its own strengths and weaknesses, and it’s up to formulators to come up with the best combination. The volume of each on its own isn’t enough, but we need to be creative in how we use all of the tools in the toolbox to create a feed that’s healthy for fish and helps them grow—and is economical.”

Vickerson notes that the price of insects is stable relative to that of other commodities on the market, such as fishmeal and soy, which experience large fluctuations based on international demand and supply affected by weather.

And these insects are locally produced, says Vickerson. Its operation is in Langley, British Columbia, close to the leading salmon farmers in Canada.

Non-animal proteins
Like Helmstetter, Calysta president and CEO Dr Alan Shaw is a veteran in building and leading biotechnology companies. Headquartered in Menlo Park, California, Calysta is known in aquaculture for FeedKind, a non-animal feed ingredient touted to reduce the industry’s reliance on fishmeal. “It is completely unsustainable to continue to feed fish more fish. The world’s fisheries are at a breaking point,” he told venture capitalists gathered at the Agtech Innovation Summit in San Francisco in the spring.

But he acknowledged a technology is useless if it can’t scale. “A product has to scale for people to adopt It. It’s either going to have to be available to all the farms or none of the farms. So the problem with feed is it has to be at a scale that will blow your mind,” he said.

Calysta’s process mixes gases in a fermenter where they are consumed by natural microorganisms. The company expects commercial production of FeedKind to begin this year at its Tennessee facility, where it is collaborating with Cargill.

In order to deliver scale, though, Shaw’s vision is much bigger. “We’ve got a gold mine because natural gas is everywhere in the world. The product is very well known; it’s completely safe. The only barrier between us and producing a million tons of product is the capital to build the plants. And you’re talking 10 one-hundred-thousand-tonne plants that will cost you at least a billion dollars. But if that’s the only problem between you and making billions of dollars then, quite honestly, it’s just a timing issue,” he said.

In July, venture capital firm BP Ventures invested $30 million in Calysta. The latter said the investment will help expand production of FeedKind and support its ambition for a global rollout.

Health management
Disease prevention and therapeutics is another area that has attracted Helmstetter’s interest. One of the biggest opportunities right now, he believes, is to innovate beyond injections and immersion in a way that will not further stress the fish and not harm the environment.

He recounts going to a conference two years ago where he saw a demonstration of vaccines administered by injection guns. “I was shocked that that is where we were at,” he says. “It is not a long-term sustainable approach. It is an area that has to yield innovation.”

Introducing therapies through feed is “leading the front edge,” says Helmstetter, and one of the most exciting innovations is the use of RNA therapies in feed to give a fish’s immune system a molecular boost. It is the focus of a cadre of innovative companies and researchers addressing the need for effective, affordable health management of diseases in aquaculture.

For example, Baltimore-based startup VakSea Inc has developed an immune-boosting protein that can be delivered orally as part of feed to protect vannamei shrimp against white-spot syndrome virus. “The aquaculture industry’s big problem has not been the absence of effective vaccine; rather, it is in the way those vaccines are delivered,” said CEO Dr Ken Malone (see ANA Mar/Apr 2018).

Helmstetter also cites ViAqua Therapeutics, an Israeli company established in 2014, that similarly has a feed-based solution for shrimp. It has developed a process in which RNA molecules shut down specific genes associated with a virus. ViAqua is among the emerging companies that are now in the “technology investment stage,” according to Helmstetter.

Another in that arena is Pebble Labs in New Mexico. What is also interesting about this biotech venture is that it coordinates research being conducted at several universities and retains ownership of core findings.

“There is significant discovery-based research now, but it is not all getting into the commercial producer path,” says Helmstetter. When it does, he is likely to be there.

– With files from Liza Mayer