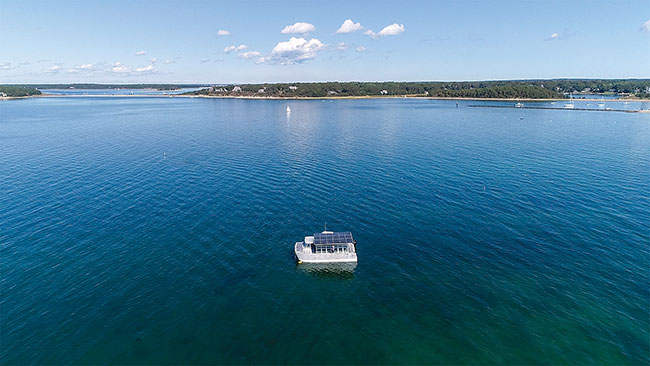 The vessel, now farming off the coast of Cape Cod, features solar power and two large modules that function as “crosswellers” to nourish racks of shellfish

Past the bobbing sailboats and skiffs along the Cape Cod shoreline, owners of spacious shingle-style homes might spot a pristine white boat with a solar-paneled canopy some 200 yards out in Megansett Harbor. A good guess would be that it’s a tour boat to Martha’s Vineyard or perhaps a research vessel from nearby Woods Hole. But no one would believe it is a self-contained, high-density shellfish farm.

In January, Dr Dan Ward, owner of Ward Aquafarms in Falmouth, Massachusetts, began marketing this vessel, which he created as a solution to many of the problems he has encountered as a farmer himself: the disappearance of real estate available for aquaculture infrastructure, pushback from property owners who don’t want shellfish farms in their backyards, back-breaking toil, high labor costs, the risks of harmful algae blooms, disease outbreaks, and storms.

The Modular Aquaculture Production (MAP) system addresses “all of those problems that are keeping us stuck in this kind of inefficient, low-margin business,” he says, displaying an almost boyish glee at having solved a very hard puzzle. In 2016, he came up with the idea of such a boat — essentially a floating crossweller — and initially funded its development through a USDA grant. Then serial biotech entrepreneur Dr. Mark Tepper entered the picture and, in 2019, Ward spun off the project and co-founded Atlantic Aquaculture Technologies with Tepper.

And that’s the other benefit, Ward says. “I’ve had numerous people come to me because they want to invest in aquaculture. They see it as the future.” He pauses, then adds facetiously, “But I tell them: what are you going to invest in? I own plastic bags on a leased beach.”

With a MAP vessel, however, a farmer owns “an actual asset” that may make it easier to secure bank financing or private investment. In turn, it can be sold. Like land-based recirculating aquaculture systems, such a physical enterprise may bring larger-scale institutional investment, something Ward says shellfish aquaculture needs.

As a boat, MAP may also open up more ocean area to aquaculture and ease permitting headaches if authorities license it similar to a fishing vessel.

The new shellfish grow-out operation is completely self-contained on the vessel, which has its own solar power and remote monitoring system. A floating platform, which includes the power storage/supply and staging areas, surrounds wells or “modules” where the shellfish are grown on trays within cages. The boat’s single-point mooring features a chain all the way to the surface, so “there’s zero entanglement risk” for whales or sea turtles, Ward adds.

Electronic lifts raise and move the shellfish.  In Ward’s operation, that means a 75-per-cent cut in labor costs and a longer working life for individual farmers. “It’s really a limited number of years that you can work at a commercial level before your body can’t handle it,” he adds. On the vessel, hydraulics comprised of pumps and baffles control the flow rate and direction of sea water, ensuring the entire module of trays receives what it needs.  This permits significantly higher stocking density — five times higher for bay scallops and over ten times for Eastern oysters. 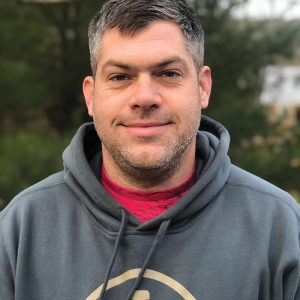 Dr Dan Ward, owner of Ward Aquafarms, has spun off a new company marketing a high-density shellfish farm wholly contained on a boat 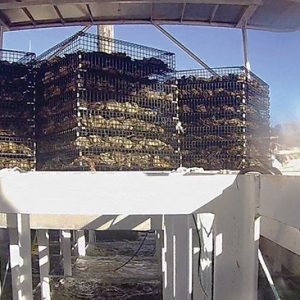 In addition to water temperature, the monitoring system also tracks dissolved oxygen, chlorophyll, and salinity. But the key point, says Ward, is that now all of these data are actionable. “Do I need to reverse water flow? Add oxygen? Move to a different area? There are all kinds of things I can do now because the entire farm is one, contained unit.”

In addition to managing environment risks, Ward’s system allows farmers to diversify crops. He has used it to cultivate high-value bay scallops and believes it will be effective with other shellfish, seaweed, and finfish. (Ward, who earned a PhD in environmental science and biology, has published scientific papers on the stocking density of Atlantic cod and diets for summer flounder.)

Ward calculates that the two-module vessel now moored off the coast of Falmouth will produce 500,000 oysters this year, but its capacity could be easily increased if he chose to farm in deeper water. After a year-long trial, he calculates that the system has both higher output and lower operating costs than traditional methods. “it is eight times cheaper for me to farm using MAP than bottom cages,” he says.

The concept is now market-ready. Although people may want to buy the entire system or a module of trays, Atlantic Aquaculture Technologies is also offering individual trays to smaller farmers or investors. Longer term, Ward muses, a restaurant may want to grow branded shellfish or a nonprofit might tap the system for nitrogen remediation.

In addition to this spin-off, Ward plans to continue to run his two marinas and Ward Aquafarms — a part commercial operation and part lab. “I use my farm as a research platform to be able to improve methods and techniques in the industry,” he says.