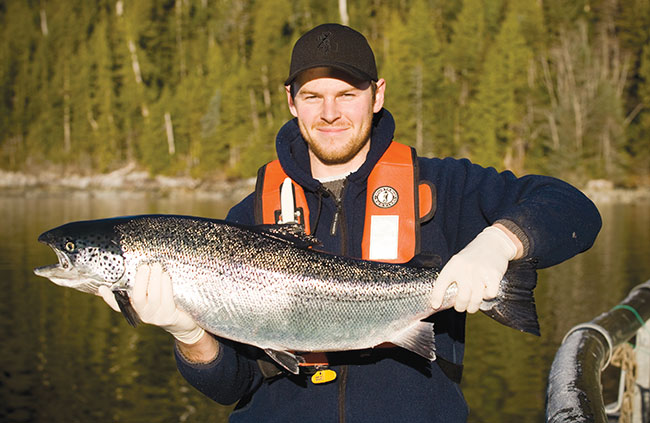 Mowi was ranked most sustainable protein producer in the world for a third year in a row. (Photo: Mowi Canada West)

The independent Coller FAIRR Protein Producer Index has recognized farmed salmon producers as “the most sustainable animal protein producers in the world.”

“By all indicators, salmon farming is the most environmentally efficient animal production on the planet: lowest fresh water use, lowest carbon emissions, smallest environmental footprint.”

The Coller FAIRR Index is an assessment of publicly-traded animal protein producers on critical environmental, social and governance issues. Among the salmon companies listed, two companies, Grieg Seafood and Mowi, have operations in Canada. Canada’s two other major salmon producers, Cermaq and Cooke Aquaculture, are privately-held companies and not included in this Index, but are globally recognized in other sustainability indices.

“Canadians should celebrate the global-leading sustainability performance of this innovative food producing sector,” said Timothy Kennedy, President & CEO of the Canadian Aquaculture Industry Alliance. “In addition to playing a leadership role in environmental stewardship, Canadian salmon farmers are producing a healthy and secure food, creating year-round jobs, and they are opening new economic opportunities for rural, coastal and Indigenous communities.”

According to Coller FAIRR, salmon farming is a blue economic opportunity for Canada at a time when farm-raised seafood is an increasingly important food source globally. The United Nations Food & Agriculture Organization (FAO) predicts that seafood farming globally will produce 63 per cent of all seafood by 2030. “Seafood farming is already the source of over half of all global seafood production.”

“There is such incredible opportunity for this young and dynamic sector in Canada,” said Kennedy. “Salmon farming is an increasingly precise practice which incorporates traditional animal husbandry with high tech solutions. There has been consistent improvement year to year through investment in new technology and innovation. We’re producing healthy Canadian-grown protein while protecting the environment and helping to combat climate change.”