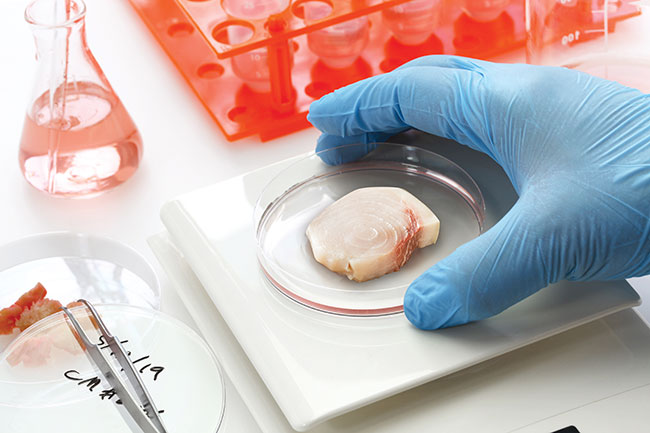 When animal nutrition leader Nutreco announced a new partnership with California-based BlueNalu in January, all eyes shifted to the wave of investments pouring into startups in plant- and cell-based seafood. Industry watchers who follow the money continue to pay close attention to this nascent category, tracking to see if it will mirror the trajectory of meat alternatives like Beyond Meat and Impossible Foods.

“Next to venture capital funds and national funds (for example, China’s national fund), it is large corporations such as Cargill, Tyson, Merck, Google, UBS, and PHW Group that have already invested in these companies,” says a report about meat substitutes by global consulting firm Kearney.

Now funds are fueling faux fish.
Last year, Tyson invested in New Wave Foods, a producer of plant-based shrimp that is not in the market yet, according to its website, but is served in the Google cafeteria. In January, global grocer Tesco began rolling out a new vegan-friendly tuna product from Good Catch, started by chef brothers who are also creating Tesco’s Wicked Kitchen vegan line.

That’s the pattern. “In addition to their financial support, most large corporations bring along agriculture-, biotechnology-, and food-related knowledge,” Kearney notes. And they’re hedging their bets as to which sources will meet the world’s growing demand for protein.

Crosswinds for aquaculture
This interest in fish alternatives comes at a time when aquaculture—“legacy aquaculture,” as some of the new entrants call it—is being buffeted by crosswinds.

Take, for example, the about-face of PM Justin Trudeau’s Liberal government before the latest Canadian election when the party pledged to transition all ocean fish farms in BC to closed containment by 2025 (see related report on page 3).

And even land-based aquaculture has become “a complicated space,” as Nordic Aquafarms president Erik Heim diplomatically says. His company has faced “subcultures” opposing projects in both Maine and California. “You have people who just simply hate fish farming and believe that the world should go vegan and that we’re wasting too much food in the first place, so we don’t need any more fish.”

In fact, it was a vegan activist organization behind the undercover videos of a Cooke Aquaculture salmon hatchery in Maine that showed alarming animal abuse, including workers smashing live salmon against a concrete wall.

Overall, aquaculture is facing serious concerns revolving around animal rights, the environment, and the increased risk when aquaculture enterprises grow in size. On the coast of Maine, wealthy landowners fought the expansion of an oyster farm lease from 10 to 40 acres, impugning it as “industrial ocean farming.”

“That’s at the core of it: it is difficult to scale up these systems sustainably,” says Jen Lamy of the Good Food Institute (GFI), an alternative-protein advisory and lobby group founded by Bruce Friedrich, a former high-profile PETA activist.

To serve a new group of consumers
The number of vegetarians in Canada has been growing, from 4 percent of adults in 2003 to 9.4 percent in 2018, according to a survey by Dalhousie University. But, unlike Canada, vegetarianism in the US has been fairly stable over the past 20 years, with 5 percent of adults opting for that identification in a 2018 Gallup poll.

What has been growing, however, is the number of “flexitarians,” whose vegetarian diet occasionally includes meat and fish. Nearly 23 percent of Americans report eating less meat in the past year, Gallup announced in January. Most cite health concerns as the reason.

The food industry has made the flexitarian lifestyle a lot easier: the number of vegetarian food and drink products doubled between 2009 and 2013, according to Mintel, the global market research agency.

Although the original generation of frozen plant-based seafood, such as Gardein, targeted vegans, fish alternatives have broader appeal as their taste, pricing, and convenience improve. “As plant-based products grow, the number of people interested in them will grow,” says Lamy, GFI’s Sustainable Seafood Initiative Manager.

“Delicious” is frequently heralded as a goal when analysts talk about fish alternatives. For example, Good Catch, which makes a tuna substitute from a six-legume blend flavored with algal oil, adopted the tagline: “Plant Made / Chef Mastered.” This emphasis on taste may well yield the answer on how large the niche category will become.

Faux ahi tuna made from Roma tomatoes is now on the menu of Yuzu Sushi, a fast-growing chain of sushi restaurants in Quebec and New Brunswick (Credit: Yuzu Sushi)

The pitch for plant-based meat substitutes is similar to that for faux fish—no harm to animals and less taxing on the environment. But there’s one key difference: Doctors recommend eating less red meat, but more fish. That difference strongly suggests lower potential for faux fish. (Credit: bit245 / iStock / Getty Images Plus /Getty Images)

Plant-based meat sales grew 9.6 percent in the year ended April 2019, smaller than the 25-percent growth a year prior. They appear not to impact meat sales, data from USDA show (Credit: Liza Mayer)

A nascent category
Right now, annual sales of fish substitutes at retail in the US are only $9.4 million, representing just 1.2 percent of the $800 million for overall plant-based meat and fish, according to SPINS data released by GFI. But those sales don’t include leading retailers like Trader Joe’s, Whole Foods, or ALDI. Nor restaurants.

Expect sales to increase as companies use the influx of investment dollars to ramp up production and expand distribution.

Good Catch, which raised $10 million last year, is now hiring for a new Ohio production facility and has a relationship with Whole Foods, in addition to multinational grocer Tesco.

Besides the sushi counters at Whole Foods, New York-based Ocean Hugger Foods has been bringing Ahimi, its faux ahi tuna carved from Roma tomatoes, to restaurants and cafeterias. Last April it earned a spot on the menus of Yuzu Sushi, part of MTY Group, one of the largest franchisors in North America’s restaurant industry.

“Our chef and I were thinking about adding vegetarian products and this request also came from customers,” says marketing director Julie Lamothe, adding, “It’s good, tasty.” The sushi alternative is offered at all 68 restaurants of Yuzu Sushi in Quebec and three in New Brunswick.

Restaurant distribution is key for seafood. In the US, consumers spend about two-thirds of their annual expenditures on seafood in restaurants, cafeterias or other types of foodservice businesses, according to NOAA.

Will faux fish follow the path of beef?
Investors in the new generation of fish substitutes are betting this category will follow the explosive trajectory of novel meat replacements, like Impossible Foods and Beyond Meat, which celebrated its 10th birthday last year with a sizzling IPO.

Plant-based meat sales grew 9.6 percent in the year ended April 2019, smaller than the 25-percent growth a year prior.

These new products do not appear to be cannibalizing meat sales, however. In fact, since their introduction, cash receipts for the US beef industry have increased 54 percent, according to the USDA.

The pitch for plant-based meat substitutes is similar to that for faux fish—no harm to animals and less taxing on the environment. But there’s one key difference: Doctors recommend eating less red meat, but more fish. That difference strongly suggests lower potential for faux fish. Close to 25 percent of consumers who avoid eating animal-based protein do so because of health issues versus 16 percent of consumers who do so for environmental issues, according to Mintel.

“Despite the attention and the investments, plant-based fish innovation may face challenges finding a mainstream market who will actually buy it and it may all come down to why. The reality is—other than allergy issues—there is no real health barrier to fish and shellfish consumption and sustainability concerns remain somewhat niche,” says Kaitlin Kamp, food and drink analyst at Mintel.

And the jury is still out on whether the large-scale commercial facilities that will be needed to produce fish substitutes represent less of an environmental threat.

“All food production requires inputs such as food, water, energy, and physical space,” writes David Roberts of Sustainable Fish Farming Canada. “The key is to find food production systems that have the highest yields of output for the least amount of inputs.”

Tim Kennedy, president and CEO of the Canadian Aquaculture Industry Alliance, echoed the question about environment impact. “It is hard to assess at this point both what the opportunity is and the environmental issues are [for the fish alternatives]. They will take production resources and space. When you look at environmental efficiencies, will they be friendlier?”

Should fish farmers be worried?
If the faux fish market mimics that of beef, it will not steal share from aquaculture. “Right now, we see it as a complement—and a very small one,” says Kennedy.

However, it may have other impacts. These product innovators, as well as some investors, describe themselves as “market disruptors.”

Part of that disruption will surely come as they promote their products with iconoclastic language that foretells of the “total collapse of the ocean ecosystem” and announces “No fish were harmed in the making of this product.” For some consumers, it may focus attention on issues that had not been so clearly on their radar.

Seafood farmers should expect some static ahead.
Tension is already playing out on another stage: Seafood Expo North America in Boston, North America’s largest seafood trade event. This year organizers barred TUNO, a soy-based protein with a texture like tuna, from the exhibit hall, triggering legal threats from its distributor, Atlantic Natural Foods. Although the event had given Ocean Hugger Foods the green light in 2018, the show has a new policy that restricts the expo to seafood producers.

RAS to the rescue
The situation may be different for RAS, which Blue Ridge Aquaculture sees as the “logical evolution of aquaculture.” Based in Virginia, the company says it is the largest indoor producer of tilapia in the world, having delivered 4.7 million pounds of live fish to market last year. And it is expanding.

According to business development director Martin Gardner, RAS “addresses a lot of the concerns that may have driven plant-based solutions.”

And Nutreco may agree. Less than two weeks after it took a stake in BlueNalu, it announced an investment in RAS-based Kingfish Zeeland. The funding will help the Dutch yellowtail producer build a much larger RAS facility in Maine by 2021, the third RAS fish farm on the drawing board for the state.

Which brings us back to how companies are hedging their bets. They are exploring many options to feed the future. Some are going it alone; others, in partnership. Maybe aquaculture leaders will come to view faux fish producers as a “frenemy.”

“In my view, to be able to involve the conventional industry is the best path forward,” says Lamy of the Good Food Institute. How that will occur remains to be seen, but this collaborative attitude is striking. After all, 20 years ago, her boss was arrested for throwing fake blood on models wearing fur coats.