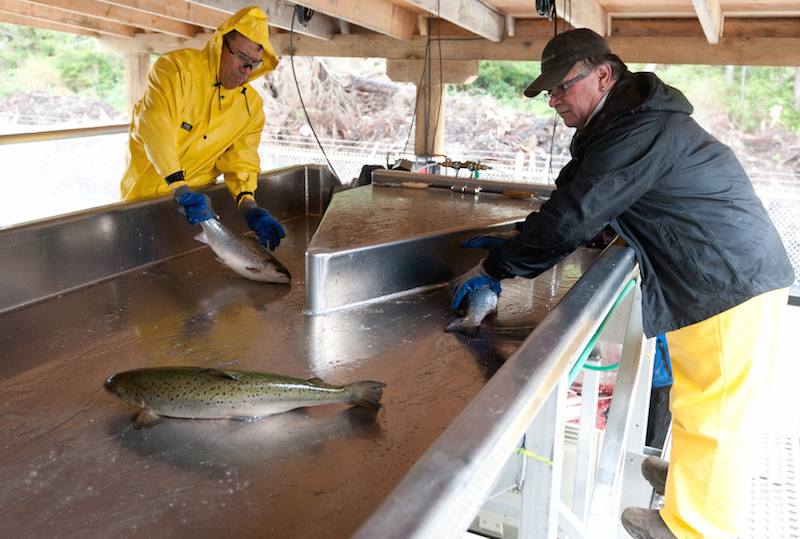 Harvesting Atlantic salmon at Kuterra Ltd – also a 2013 finalist. The company is a land-based salmon production business in British Columbia Connecting aquaculture with investors is the purpose of a biannual competition sponsored by major foundations.

In an effort to combine her early education in marine biology and her later act with a business degree and several years in venture capital and financial banking, Monica Jain has come up with a competition that connects sustainable aquaculture companies with potential investors and other funding sources.

Fish 2.0 is a biannual event sponsored by major foundations, like the David and Lucile Packard Foundation, Tides Canada, and investment firms like AquaSpark and RSF Social Finance, to gain knowledge and build connections needed to increase investments in the sustainable seafood sector, including mariculture and aquaponics.

Fish 2.0 competitors try to gain the attention of possible investors by demonstrating their business models’ potential for growth and learn how to approach investors while participating investors gain early access to new deals and learn how sustainable seafood can help build their portfolios.

Currently, Phase 2 of the competition is underway where applicants demonstrate the business model and opportunity of their business or start-up. Passing scores move on to Phase 3, Phase 4, and then the finals later this year.

This is the second run of the competition, which started in 2013. “We were very happy with the first one, because we didn’t know what to expect,” the founder and executive director Jain told Aquaculture North America. “There was a much larger demand than we thought. Eighty-three businesses made it into the competition and half of those were in aquaculture. There’s a lot of great innovation in aquaculture right now. We have a somewhat limited scope for eligibility – land-based aquaculture, deep water cage systems, and aquaponics.”

Though the competition is open to businesses worldwide ranging from startups to established entities, there are some regional eligibility requirements. “Just for the south Pacific we allow applicants in mariculture,” Jain points out.

Jain said she and her team also accept any entries devising new alternative fish feeds as well as waste reduction throughout the supply chain whether it be in aquaculture or regular fisheries production.

“We allow quite different types,” Jain said. “We tell people to all apply and we’ll figure out the eligibility at the backend.”

One of the finalists from 2013 was an aquaponics and agri-nonprofit Ho’oulu Pacific. The Hawaii-based group has piloted nearly 100 systems in the Pacific islands that produces over 50 different types of vegetables, fruits, and fish. Ho’oulu, along with a Fish 2.0 Business Competition Award in 2013, has also won the Grand Prize at the 2012 Harvard Business School/Harvard Kennedy School Social Enterprise Conference Pitch for Change.

This year’s competition has some extra bells and whistles to make all comers feel like they are part of the winning atmosphere even if they aren’t one of the finalists.

“We have some cash prizes and professional support this year,” Jain explained. “Also  door prizes offered from industry leaders. For instance, if you are sustainable business, you’ll get a one day training station for learning about fish health, from industry leaders in that field.”

“Professional service awards and cash awards and every participant has investors looking at their businesses, so we believe everybody wins,” Jain said.

The investor and foundation backed competition will wean the applicants down to the finalists who then make their pitch to investors at Stanford University in October where participants will be given feedback from investors and technical experts and networking opportunities. Six winners will win $150,000 each. Another six will win $30,000 each.

The company that came out on top last year was Blue Sea Labs, a San Francisco based company, which is now providing an e-commerce portal to connect consumers directly to 22 small boat fishermen who offer sustainable, wild-harvested seafood. One of the finalists that had future applications in aquaculture was the company Cryoocyte, which is developing technology to cryopreserve fish eggs, which the tech maker says will enable fish farms to become less spawning-dependent and produce year-round.

They all said Fish 2.0 helped them progress their business,” Jain said. “Many of them have been calling and asking if they can participate this year. If their business didn’t make it to the finals, come again. If you were in the finals, and saw big growth and are generating revenues, come back.”

Swamped with the current competition, Jain couldn’t say where it’s all going from here. “I can’t think about (the competition) in 2017.  It’s a point in time for people to take advantage of now.”

USE ONE OR TWO PHOTOS

Caption: California Yellowtail production at RAS Inc – a 2013 semi-finalist.  The company, based in Maine, plans to farm marine fish and polychaete worms in an innovative RAS using integrated aquaculture concepts under development at the Centre of Cooperative Aquaculture Research. Photo courtesy of Ed Robinson.