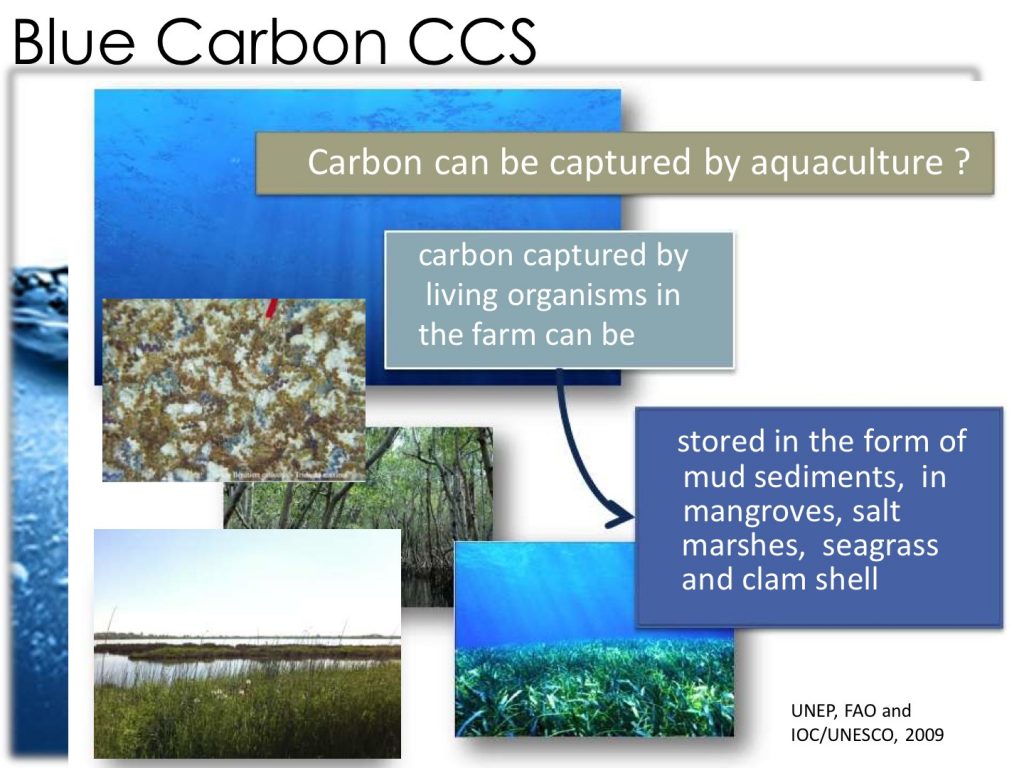 An Italian fish farm shows how the carbon sink road map can be used by salmon farmers to determine whether their operations can earn carbon credits.

Initially focused in warm water regions, the carbon sink road map can be used in other areas, by other producers, including salmon farmers, to determine whether their operations can earn credits or how many they need to buy to stay carbon neutral.

An Italian fish farm earned the Euro equivalent of US$275,000 in 2012 selling carbon credits it collects after measuring its “carbon foot print” through a newly developed process. The “Valle da Pesca” farm in the Venice lagoon, earned the money that year from its sea bass, bream and mullet production.

Developed over the past five years by D&D Consulting Italy, the “CO2 Roadmap” measures the “blue carbon sink burial rate,” in tons of carbon per hectare per year, that accrue from a finfish or shellfish farm’s operations. Dr. Doimi Mauro, principle partner in Venice-based D&D Consulting, reviewed the process in a presentation at the “World Congress of Mariculture & Fisheries,” in Hangzhou, China last fall.

At 2,000 hectares, Valle da Pesca is the largest of four currently in the credit sales business with 20 more at some stage of the assessment process. Interestingly, Valle da Pesca also doubled the price of its sea bream from €5 to €10 per kilogram by marketing its contribution to the effort to reverse global warming.

“People enjoy to know this fish farm is saving the planet,” said Mauro, a marine biologist.

The French Polynesian government is measuring the blue carbon footprints of Pahua (giant clam) farms in Bora Bora atolls with plans to use the results in tourism promotions, Mauro added.

Out of the ashes

D&D began developing its roadmap process in response to pleas from clients struggling to survive after European seafood prices collapsed in the wake of the 2008 “Great Depression.” Although his work to date has focused in relatively warm water regions Mauro said his road map can be used by other producers, including salmon farmers, to determine whether their operations can earn credits or how many they may need to buy to stay carbon neutral or meet domestic or international requirements.

“It’s not a temperature-dependent relationship. We can use it worldwide,” Mauro said. Although he currently has no salmon farms among his clients, mariculture operations in Iceland, Norway and Lichtenstein have utilized mapping processes.

D&D also helps link credit buyers and sellers, within and outside the mariculture industry. “I can organize a relationship with other CO2 sink farms that can give credits. In both modes, salmon can be sold with CO2 label,” Mauro said.

One credit represents one ton of neutralized CO2. The market value of credits varies internationally, based on economic conditions, the type of industrial activity and its pollution volume. In Europe in recent years credit prices ranged from four Euros to less than half that amount while they remain strong among Chinese buyers, according to Mauro.

He emphasized that the quality and breadth of data used to measurement a farm’s carbon collection rate is critical to the determination of its credits value. Carbon sink rates determined by D&D or other analysts must be audited by an independent third party, he noted

Among some ten standards, which vary based on their focus or strategic intent, the four are used for about 38% of world credit market ratings, according to Mauro. Because sinkage rates change with weather conditions, a farm must continue regular measurements after its initial assessment.

D&D’s mapping method begins with analysis of satellite photos to identify cells of homogeneous environmental conditions within a single property. Water depth, types and volume of sea floor and intertidal zone vegetation are all critical elements of a review. The company analyzes 11 water and 12 mud factors, including composition (slime, sand, clay) of the sea floor and combinations of organic or inorganic nitrogen, bacteria, planktons, salinity and carbon in both.

All of those factors, plus species type and volume determine a farm’s carbon sinkage rate. The process then determines an operation’s carbon emission from its vehicle emissions and other energy use. The difference between the two is the net carbon absorption or emission rate.

Cost of carbon foot-printing varies with the size of the area under review. Mauro said a complete analysis of a 2,000 hectare farm in the Venice lagoon cost about US$27,000.

Dr. Mauro can be contacted at: maurdoim@tin.it