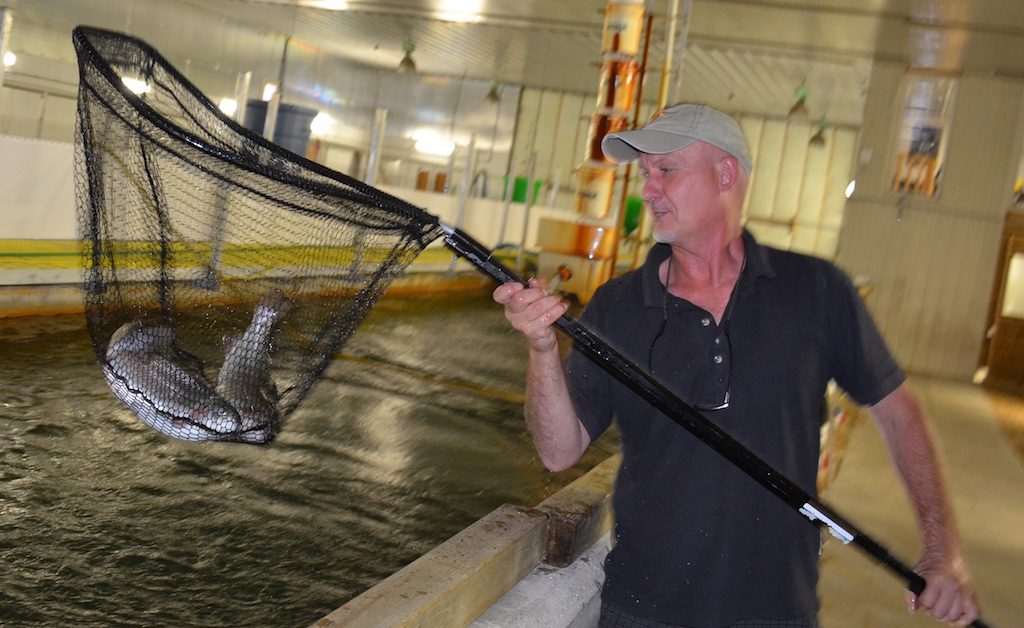 Rudy Reimer To provide diversity and sustainability this prairie farm is growing trout in a land-based system in addition to raising roasting chickens.

In the southern part of the province of Manitoba, Canada, chicken farmers, Rudy and Leslie Reimer, have parlayed their direct to customer marketing experience, some good animal husbandry skills and a bit of a kick start from a federal provincial aquaculture support program into a viable land-based trout farm business.  But it hasn’t been a smooth road.

“One of the major things we have seen over the last 3 years is a change in the market,” says Rudy Reimer from his farm near Stonewall Manitoba, Canada, 40 km northeast of Winnipeg.  “When we first started we were ahead of the game.  Consumers didn’t know about the sustainability of land-based RAS (recirculating aquaculture systems) aquaculture.  Now it is a most desirable product and consumers are willing to pay a premium.”

The Reimers have a permit to raise and farm gate sell 25,000 roasting chickens a year, carrying on a family farm tradition that began in the 1960’s.  It’s a very unusual right that was grandfathered in when Manitoba adopted the supply managed system for poultry that is practiced across Canada.  “ We are always under pressure from the marketing board (other farm gate sellers are only allowed 999 birds) and we were looking to diversify and expand as we only have two 3 month growing cycles for our birds,” explains Rudy Reimer.

Fish seemed to be a possibility and the Reimers were accepted into a now defunct federal and provincial funded program coordinated by the Inter-provincial Partnership for Sustainable Freshwater Aquaculture Development. The program was looking to develop standards for the economics and sustainability of land-based RAS Rainbow trout systems.  Capital costs of around $1.4 million were covered, with the Reimers supplying the building, well system and all the operating costs.

The 6 foot deep, 16 foot wide, 280 foot long “U” shaped concrete raceway is housed in a converted implement shed.  “The shed didn’t have a concrete floor and that allowed us to half bury the raceway which makes it easier to work,” Reimer points out.

Water comes up 220 feet from a southeast Manitoba limestone aquifer, at an ideal 7oC.  It does not need to be filtered but requires a nitrogen de gassing tower.  “We don’t have to heat our water or the building,” Rudy says. “Our average room temperature over the year is 14.5oC.

Starting with 25gram fingerlings that he is able to source in the southern Manitoba area, Reimer says he can grow the 2 kg Rainbow trout that the market prefers, in 12-16 months. Each cohort of 22,000 fish takes 16 weeks to harvest for 125 fish or 500 lbs a week.

His feed conversion ratio for the trout is around 1:1.  The commercial broiler chickens you buy in the store can get 1.9:1 and the larger free-to-roam-in-the-barn roaster that the Reimers sell, approaches 3:1.

There were some problems getting the custom designed system running. “It’s just a question of animal husbandry,” says Reimer. “I know how to work with animals and that is something the consultants who were directing the program didn’t know how to do.”

Processing was also a major hurdle for the Reimers. Their chickens are processed on site, but it is non-inspected processing facility which only allows them direct-to-consumer farm gate sales.  “We initially drove the fish to Wild West Steelhead in Saskatchewan (an 8 to 10 hour drive over night)” recalls Reimer.  Wild West bought most of their product but a lower profit realized from wholesale since the 35 cent per pound transport cost was eating the profits.

“We are now able to have local fish wholesaler Neptune Mariner process our fish here in Winnipeg,” says Reimer. Mariner also handles wholesale distribution to stores and restaurants, while the Reimers retain about 10% for farm gate sales.

Land-based aquaculture didn’t have much of a following when the Riemers started out, but they went right for the top of the market.  They started taking their fresh fillets and smoked trout to the Wolsley Farmers Market, a haven for young, hip, socially progressive Winnipeg urbanites, some of whom were already customers of their free run specialty raised roasting chickens.

“Farmed fish? We’re not interested they would say,” recalls Reimer.  “So I would ask them what their issues were with farmed fish.”

The list included escapes, disease, antibiotics and poor use of water.   The Reimers talked to customers, gave them literature and showed videos of their closed RAS system.  “I was able to talk to them directly as a producer and explain that our farm had none of those issues.” he says. “They liked the smoked trout and they would take 1 or 2 fresh fillets home to try.  The next time they’d take 3 or 4 fillets.”

“We have been able to keep our brand name through Mariner, says Reimer.  “People now ask for Watersong trout at restaurants and grocery stores.”  That brand name recently received a boost with ‘Ocean Wise” certification.

Although the facility is designed to produce 140 tonnes per year, Reimer is comfortable with 120 tonnes. “I could certainly sell more,” he says “the demand across western Canada is certainly there for a sustainably reared land-based product.”