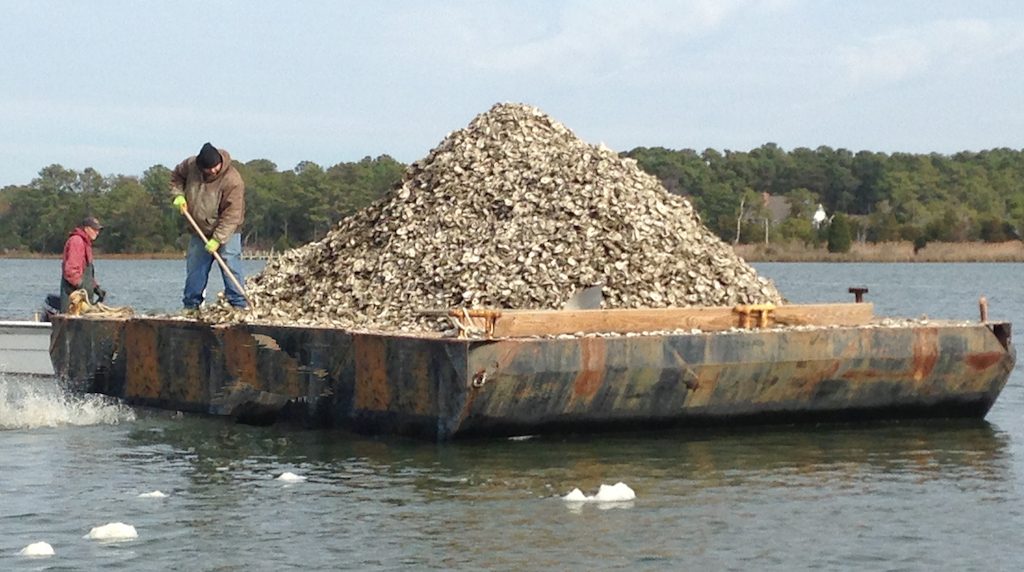 Purcell’s Seafood exemplifies the trajectory of the oyster aquaculture industry in Virginia and the unique partnership between the seafood industry and the Marine Advisory Services (MAS) that has helped fuel that growth.

Thanks to MAS’ Fisheries Resource Grant Program (FRG), growers in Virginia have been exploring ways to expand the season, reduce labor costs, and improve profit.

The grant program, funded annually by the State of Virginia legislature since 1999, offers grants and technical assistance and over the last decade the program has funded nearly $900 thousand worth of projects related to oysters.

Rich Harding of Purcell’s Seafood on the Little Wicomico River in Virginia’s Northern Neck area has been researching “spat on shell” (SOS) production with the support the MAS to improve harvest volumes.

“When we get an average set like this — with highs like this one and lows maybe at 4 or 5 strike per shell,” Harding explains, “we’ll likely get a return of one and a half or two bushels of market oysters for every bushel of SOS planted.”

That kind of bottom line has oyster growers in Virginia increasingly turning to SOS oyster cultivation in addition to single seed oyster aquaculture for the half-shell market and traditional wild harvest, and the new methods have helped fuel greater than 300% increase of oyster landings on private ground over the last five years.

And oysters raised from SOS can be harvested whenever desired and whenever the market demands.

Oysters are plentiful in the fall, Harding said, but now, “we’re creating a good market for triploid oysters that we harvest in the summer.”

SOS fills a niche that allows growers to operate almost year-round, providing wild oysters for shucking in the cooler months, single oysters for the half-shell market from seed culture, and SOS oysters in the summer or whenever the shucking houses are running low.

Over at Hacks Neck Farm, Myles Cockrell and his family have been raising cage oysters for the

last 6 years on Spences Creek off the Little Wicomico River. Like Harding, Cockrell has found SOS cultivation can control two aspects of the oyster business that have a huge effect on his bottom line.

“You get a premium for your oysters in the summertime, when normally you would have less competition,” also Cockrell said, “you should be able to plan on what you’re putting down there, with the disease resistant strains, they should live.”

“We look to industry to come up with ideas of how to better manage the resource and be more profitable,” said Tom Murray, director of Marine Advisory Services and Sea Grant Marine Extension leader at Virginia Institute of Marine Science (VIMS). “It’s not always easy for industry to dedicate money for new equipment and supplies – especially if a technique is not proven.” Murray has administered the grant fund since Virginia’s General Assembly set it up in 1999. Since then, the program has funded just over $2.2 million on 110 individual projects.

“What sets this grant program apart is that we’re not funding scientists, but instead look to industry itself to identify ideas they think will help improve a fishery, aquaculture, or seafood processing,” said Karen Hudson, aquaculture specialist for the Marine Advisory Services. Mike Oesterling, executive director of Shellfish Growers of Virginia, said that the development of triploid oyster and disease resistant species really spurred Virginia’s oyster aquaculture industry, which first took hold on Virginia’s western Chesapeake Bay Rivers in the early 2000’s.

“First the focus was on single oysters, people saw the advantage to having fat, plump Virginia oysters in the summertime when no one else had them,” Oesterling said, but with the addition of SOS, the growth has been phenomenal.

The Fisheries Resource Grant Program has been right alongside industry during this growth working with the growers and supporting the kinds of experiments that a working waterman or grower might find difficult to justify self-funding. “The FRG is a great way for those in the seafood industry to try a new idea or a new concept without committing a lot of time and effort to a research project,” Oesterling said.

For example, oyster growers have utilized the FRG grant program over the last few years to evaluate ways to reduce the incidence of Vibrio and to improve single-shell oyster production. It’s a great opportunity, Oesterling said, for someone to try something different without jeopardizing their livelihood.

John Vigliotta of Ward Oyster on Ware Neck on the Middle Peninsula of Virginia’s western shore, has used SOS for several years to fill the critical summer market niche. But, he says “there’s still a lot for shellfish growers to contend with.” Closures due to water quality, predation by cow nose rays, market fluctuations, contamination with Vibrio, harmful algal blooms, limited waterfront access and access to good clean shell, an increasingly limited commodity.

Tim Rapine of Cherrystone Aquafarms on the eastern shore of Virginia has eyed the FRG program for a couple of years, since the company committed to adding SOS production to their already successful lines of clam and single oyster culture. “We’d have to set aside the time [for the project], but we still have many questions – especially about substrate, since oyster shell is such a limited commodity,” Rapine said.

Oysters ripe for the shucking market and for the half-shell trade are being dredged up from private grounds on the eastern and western shores of Virginia, and growers are calculating their returns.

“We’re pretty lucky in Virginia, we’ve got both VIMS and the Virginia Marine Resources Commission educating us on larvae, temperature issues, how to do the set,” said Rich Harding. And with the Fisheries Resource Grant program, Harding said, “it’s been a great joint effort.”

Fall is a good time for fishermen, watermen, and growers to start thinking how a Fisheries Resource Grant might help with expanding options, improving the methods, and increasing the bottom line. The RFP for 2016 projects will be announced November 1, 2015, with a January deadline for proposals. Contact Tom Murray at tjm@vims.edu for details.