A British Columbia-based company at the forefront of floating closed containment systems is confident the time will come when it will see a more wide-spread adoption of the technology. 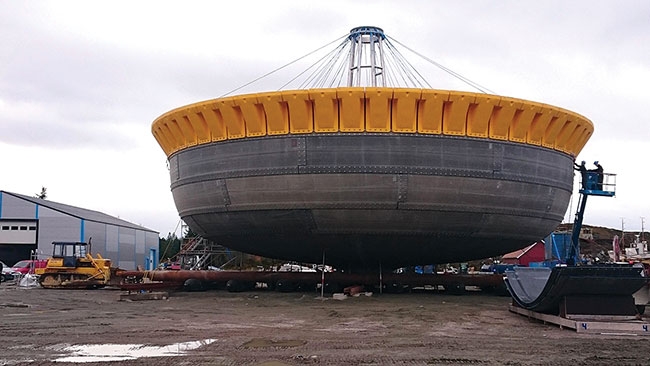 Sean Wilton, director and CEO of Agrimarine Holdings Inc, acknowledged there isn’t as much buzz around floating closed containment technology—at least in the West Coast—as there is around recirculating aquaculture systems (RAS).

“From our point of view we believe a bit of that is regional,” Wilton says. “It has become very topical in Norway. For example, there’s a lot of floating closed containment research going on, heavily funded by the farmed salmon industry and the Norwegian government, that’s looking particularly at solutions for post-smolt production.”

“It is a little bit of a niche,” Wilton says. “It’s a specialty technology that solves some issues if you are in high-surface water temperatures or have surface algae issues, but it doesn’t have the same level of absolute control as land-based RAS. It’s lower cost but offers slightly less control, and so it’s in a specialty application setup.”

He says AgriMarine TechnoIogies, which pioneered the development of marine-grade floating closed containment systems over 10 years ago, would obviously like to see it more widely adopted. But it would take time. Like the ambitious RAS farms currently being built around the world, AgriMarine’s technology needs to prove itself over several production cycles before people will accept that it might actually work, admits Wilton.

Agrimarine has deployed the technology at a steelhead farm in Powell River, BC, which, prior to Agrimarine acquiring it in 2012 saw high mortality rates in the summer.

“Having our own farm and our own engineering group in-house allows us to learn what it takes to use floating closed containment in a real-world commercial environment,” Wilton told Aquaculture North America (ANA) in an earlier interview.

The farm produces 1,200 MT of steelhead annually and has now seen six full production cycles at commercial production scale. “That’s only just starting to scratch the surface of being an acceptable base case of information for people to need to look at it because it has to continue to produce ‘all the time’ and not just ‘most of the time’,” Wilton says.

“So we’ve had to keep refining, keep showing that we’re actually doing business. There have been various tombstones written about us many, many times saying we would go away, but we didn’t. And slowly it will get a little bit more acceptance and seeing it now, as people are adopting it for the post-smolt world, some operators will get comfortable with it that they would just leave some of the fish in and grow them in there to full size,” he continues.

“So think it will find its legs at some point. We’d like to see some trials happening here in BC like those that are happening in Norway. That would be awesome if we could get some of that happening. I think we’ll see that at some point.”