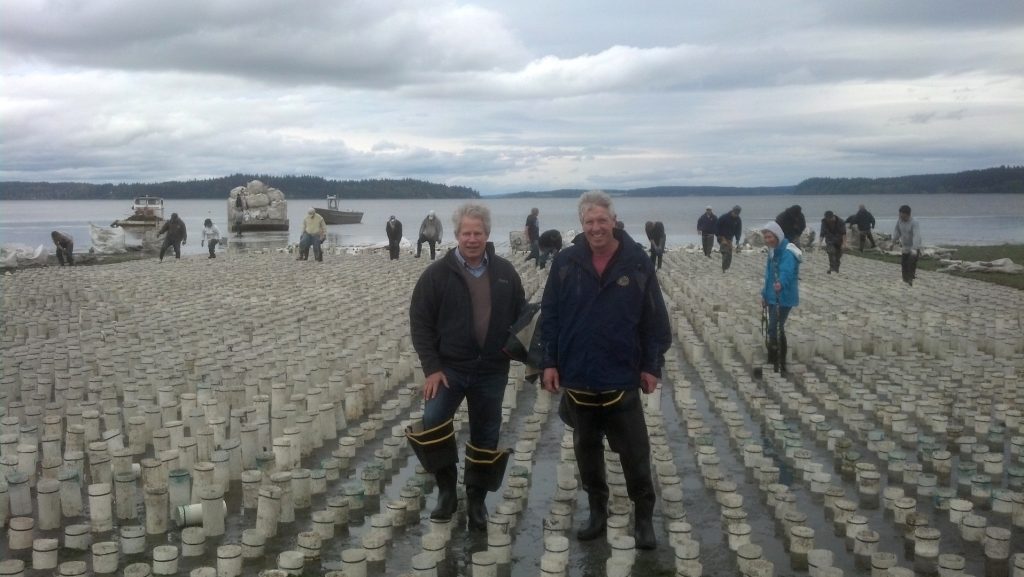 “I could see Brian crawling  on the bare sand carefully inspecting the beach.  Fully expecting, or at the very least hoping that it was a false alarm, I shouted out, “Brian, are they all there?”  He looked up and said, “Jim, I think they’re all gone.”  I’m sure he felt like crying.  I know I did.”

“Who knows what will happen when a predator finds a new food source” was Dr. Joth Davis’ response in the spring of 1998.  I had asked him when our startup’s one-year-old crop of farmed geoduck clams would be safe from predation.

Of course, the more academic answer to my question is that geoduck clams are safe when they reach “depth refuge”, a point where the clam has dug itself deep enough into the beach substrate to avoid predation. But Davis’ comment has held true over the years.

Geoduck is a Nisqually Indian word (pronounced gwee dukh) and means “to dig deep.” Although geoduck clams can live to be over 160 years old, farmed geoduck clams raised on an inter-tidal beach are generally harvested 5-8 years after being planted.  Mature clams are found three to four feet (a meter) in the sand where they extend their long siphon up through the substrate to filter feed on micro algae in the water above. The Chinese prize the long white siphon of a number one graded geoduck clam for its savory flavor and crunchy texture, often serving it in a fondue-style Chinese hot pot.  There is a good market for both farmed and wild geoduck clams.

In addition to being Taylor’s chief hatchery researcher, Joth has his own small shellfish farm where in addition to geoduck, he grows oysters, and Manila clams. Like me, he became interested in farming geoduck in the mid 1990s.

In the early 1990s Taylor Shellfish was one of the first shellfish growers to begin experimenting with geoduck farming.  It was during the spring of 1998 that Joth and I were discussing an expensive lesson Taylor’s had learned a year after planting its first commercial-sized crop of geoduck in 1997.

The primary method of farming geoduck then, and now, was to push a 10 inch long 4-6 inch diameter piece of PVC pipe a little over halfway into a beach, drop 3-4 approximately quarter inch seed (baby geoduck clams) into the pipe, and then cover the pipe with a small net to keep predators out. It was on one of the first daylight low tides in April that I went out for a beach inspection of our first farm only to discover some large crab pits abutting some of our PVC pipes.

I phoned Paul Taylor, Joth’s boss to express my concerns about the crab pit findings. He mentioned that Brian Phipps, Taylor’s geoduck farm manager, had already pulled some tubes from their first crop of one-year-old geoduck and was at that very moment going out to take a look, suspecting crab predation.

I asked Paul if he’d mind if I went out to their farm to see what Brian was finding.  The folks at Taylor Shellfish were and continue to be very helpful to a new shellfish farmer like me, so I was not surprised when Paul encouraged me to go.

An hour later I was walking down the beach above Taylor’s first commercial crop of geoduck.  In between two patches of 6” PVC tubes on the beach, I could see Brian crawling on the bare sand, carefully inspecting the beach.  Fully expecting, or at the very least hoping that it was a false alarm, I shouted out, “Brian, are they all there?”  He looked up and said, “Jim, I think they’re all gone.”  I’m sure he almost felt like crying.  I know I did.

At that stage of the development of the geoduck farm industry, the general consensus was that a young geoduck clam should be safe when its shell/body was below the buried edge of the 10” PVC tube.  Taylors had planted these geoduck clams the previous summer. In February, Brian had determined that the earliest planted geoduck were already well below the tube, maybe 8-10 inches deep in the sand.  Brian’s crew had pulled about a third of the 75,000 tubes in February 1998, planning to make use of the PVC tubes for the crop to be planted the upcoming summer

As Brian explained his reasons for pulling the tubes, we looked on either side of the bare beach in the planted tubes that he had prudently left in place.  We counted 3-4 live baby geoduck in each tube. I could not help but do a little math in my head, coming to the conclusion that if just half of the missing clams had lived and grown to full size, Taylor’s would have had another $750,000 in gross sales.  The obvious question was what predator got to them.  Known predators of geoduck include starfish, flatfish, moon snails, and crabs.  However, in this instance, Brian came to the conclusion that what killed these geoduck clams were diving ducks.

This was the first of many painful lessons by those of us who were trying to farm a new species.  And being a novice at shellfish farming myself, the company I started in 1997, Seattle Shellfish, experienced more than its fair-share of painful lessons.   Even now, almost 20 years later, we’re still learning.

My lessons began in 1997, when more than 95% of the first hatchery seed we received died. In 1999, we changed to a smaller mesh size and when the mesh tops fouled over with seaweed, we pulled the nets off only to allow small crabs to eat much of our new crop.

By 2004, we had learned to leave the tubes in the beach for two years rather than one, but still ended up losing 95,000 young clams when we pulled the tubes too early.  In 2006, we began a new planting method placing large 40-foot by 40-foot area nets over the tubes but this ended up being a mini disaster as survival rates plummeted.

In 2013, I told the farm manager of our second largest farm that we should be able to pull all predator protection from any clams planted before 2009.  Twenty minutes later I discovered crab predation occurring on a 2007 crop – six-year-old clams!

There is another dangerous predator….

In 2012 Steve Wilson of Arcadia Pt. Shellfish, a friend of mine that I had helped get started in the geoduck farming business, noticed some men in a skiff diving over one of his farms just after dusk.  When they finished diving, Steve went down to the boat ramp where they were hauling out and in a friendly manner pointed out that he had noticed their boat floating over his farm and inquired as to what they were doing.  A guy still wearing a wet suit still dripping with water, leaned out of the boat and said “You didn’t see anyone in the water.”  Poaching is a problem for geoduck farmers.

NIMBYs (Not-In-My-Back-Yard) working with regulators and legislators are like predators.  Because of new federal, state, and local regulations there has been a virtual 7-year moratorium on the expansion of any new or existing shellfish farms in Washington State.  Although not predating on your product, NIMBYs, regulators, and legislators can be very effective at preying upon your business.

The last two-legged predator I’ll mention can be customers.  In 2002, I made arrangements for our first sales to a prospective customer who suggested that the exchange – geoduck clams for cash – occur in a parking lot of a restaurant in the middle of the night.  After a few of these sales I got nervous and never did business with him again.  A few months later I was contacted by the Federal Bureau of Investigation.  The customer had fleeced several other aquaculturists; one of whom lost almost $50,000.

In July 2012 the UHA had five sub-tidal plots of geoduck ready for harvest. They had been planted in 2002.  Growth of geoduck clams takes considerably longer in the sub-tidal waters of Canada (where the UHA was working) compared to the nutrient-rich waters of South Puget Sound where we farmed.  Bruce stated that the UHA harvest divers commented upon a very abnormal number of aggressive Dungeness crabs on the harvest site, even going so far as to joke that they couldn’t leave their hands in the harvest hole too long or they might be bitten.  The dive team left the harvest site in late July after harvesting clams from two of the five sub-tidal plots. They planned to return soon to get the estimated remaining 100,000 pounds of 10-year old geoduck clams.

When they returned five weeks later they couldn’t find any siphon holes in the bottom let alone any geoduck clam siphons!  A few weeks after that discovery, the divers began to see rows and rows of white spots appearing on the sandy bottom.  We in the farmed geoduck clam business are very familiar with these spots; they come from decaying and dying clams.

Bruce began using a venturi system to excavate around the plots.  The clams were still there, both on the partially harvested plots as well as the untouched enhanced plots.  But the tops of each and every siphon had been chewed off, killing the clams.  Bruce surmised that a horde of hungry Dungeness crabs bulldozed their way through the sand eating anything they could get their claws on.  I’ve actually seen a crab eating a perfectly healthy, mature geoduck clam, so even though no one was there to witness some 100,000 pounds of 10-year old geoduck clams disappearing over a five week period – something killed them and crabs are the prime suspects..

To conclude this geoduck tale where we began …. when will a crop of geoduck clams be safe from predators?  Never!

Jim Gibbons is founder and CEO of Seattle Shellfish LLC