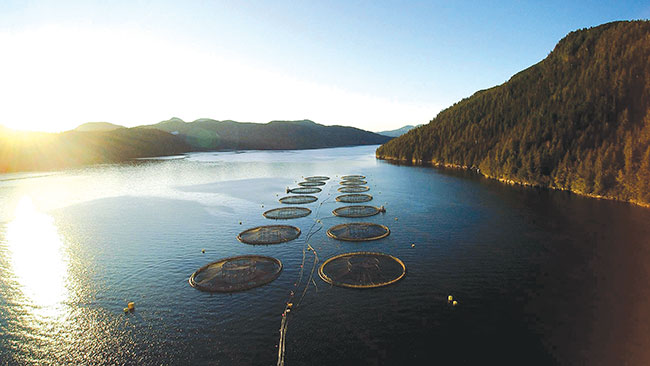 First Nations communities in British Columbia, Canada, are keeping a close watch on the actions of Fisheries and Oceans Canada, anxious to find out what the government will do after federal licenses for fish farms operating in a contentious body of water in the province expire next week.

The licenses of 18 fish farms operating near the Discovery Islands area expires Dec. 18.

Last year, Prime Minister Justin Trudeau has unveiled a comprehensive agenda which called for the replacement B.C.’s open net pens with land-based salmon farms in the next six years.

Fisheries Minister Bernadette Jordan is expected to make a decision this month on whether to renew the licenses. The minister is facing pressure from First Nations leaders in B.C. who contend that fish farms are causing  a decline in salmon stocks, according to the National Observer.

In November, Jordan said she will consult with the province’s First Nations communities, the aquaculture industry, and environmental stakeholders on the initiative to transition from net pen fish farming.

According to the National Observer, Bob Chamberlin a member of the Kwikwasut’inuxw Haxwa’mis First Nation, is hoping that Jordan will side with First Nations that are calling for a ban on open net pens.

The Discovery Islands is contentious because the region is along the migration route of sockeye salmon heading for the Fraser River. Groups opposed to fish pens say the farms are the source of parasites that harm the fish population.

“Nations in the Discovery Islands are in consultation with DFO regarding fish farms in their territories and are calling DFO to protect wild Pacific salmon by revoking the licenses for the fish farms immediately,” according to the British Columbia Assembly of First Nations. “There is ample research and evidence that supports our understanding that the decline of Pacific wild salmon is the result of cumulative stressors along its migration routes.”

However, some two months ago, Fisheries and Oceans Canada released the results of a scientific risk assessment which indicated that fish farms operating near Discovery Island in British Columbia have “minimal” impact on the health of migrating salmon.