Government vs The People? 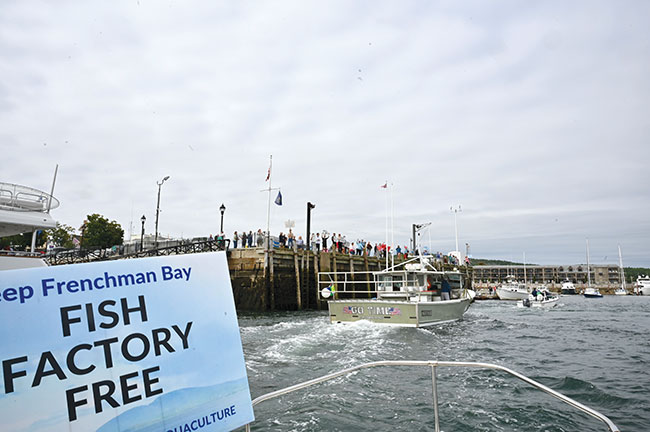 In a few short years, Maine has become a laboratory for innovation in salmon aquaculture.  But while governmental entities have firmly backed these advances, pockets of fierce public opposition persist.

Gov. Janet Mills’ 10-year economic development strategy calls for advancing aquaculture to complement traditional fishing.  But, beyond that, it cites the opportunity to develop “sustainable food sources closer to markets” which can take advantage of Maine’s leadership in veterinary science, marine research, and waterfront workforce.  That sounds straight from a salmon producer’s business plan.

Americans love their salmon. But the question looms in the Pine Tree State: will Maine grow it for them?

Nordic Aquafarms
In late August, Nordic Aquafarms received the last official permit required for its $500- million recirculating aquaculture system (RAS) in Belfast – more than three years after holding its first public informational meeting.  But celebration was clouded by a yet-to-be-decided lawsuit over who owns intertidal land the company needs for its intake and outflow pipes.

Public opposition to Nordic Aquafarms’ project had come early on, sparked by concerns about possible environmental impacts and the swift support the company had received from the local Belfast government. Lawsuits ensued and were resolved, except for this one case still pending before the county court.

Then, a new drama emerged early last summer.  Nordic Aquafarms purchased a waterfront parcel – next to the disputed intertidal property – and sold it to the City of Belfast for one dollar, in exchange for a permanent easement for aquaculture piping installation, operation, and maintenance.  The mayor announced it would make a “tremendous” waterfront park with walking trails.

About a month later, the City Council voted unanimously to use eminent domain to take over the entire area, including the disputed intertidal zone.  Nordic Aquafarms’ opponents are now asking that the City be named in the pending court suit, according to Maine Public.

American Aquafarms
This fall the Norwegian entrepreneurs behind American Aquafarms made their first trip to Maine after announcing plans for a $250-million project in Frenchman Bay that would feature cages of an innovative floating semi-closed design. On the agenda was a public meeting to address a broad spectrum of opponents, but it was cancelled at the last minute due to COVID concerns.

Much of the pushback against this venture focuses on its proximity to famous Acadia National Park.  At its closest point, the salmon farm would be just 2,000 feet away, say park officials.

Kayakers, tour boats, and cruise ships all vie for these pristine, island-dotted waters, as do  lobstermen, kelp farmers, and mussel growers. They were among the end-of-summer protest when 125 boat owners organized as the “Save the Bay” flotilla and circled the bay.

Ted O’Meara, a Maine public relations veteran, was there and spoke to Aquaculture North America afterwards about American Aquafarms. “It’s clear that these are the wrong people in the wrong place who have built their project around 30 net pens using a technology that was only recently introduced to North America with a trial of just one pen. That’s not good enough for Maine, and with the opposition that is building, I don’t think they will be successful.”

The opposition in this case also includes some parts of government, namely the Bar Harbor-based officials of Acadia National Park.  In July, the park superintendent sent a five-page letter of concerns to the Department of Marine Resources, where American Aquafarm’s preapplication is still under review.

Whole Oceans
Just about halfway between Belfast and Bar Harbor sits Bucksport, a community of 5,000 that welcomed the idea of a large, commercial salmon farm in 2018 after 575 workers had lost their jobs when the local paper mill closed a few years earlier.

Whole Oceans purchased 100 acres at the former mill site to build a $180-million RAS farm. Last December, it added 10 acres in the area of its saltwater intake that would also provide deep water access and a wharf with a warehouse.

In under two years, Whole Oceans secured nine local, state, and federal approvals, getting the greenlight at the end of 2019.  By the following spring, the company had brought Michael Thompson on board as senior project coordinator to lead on-site work, including assembling design and construction teams and managing contractors.

This year, Whole Oceans thought it might get a helping hand from government when a bill was filed in April on behalf of Governor Mills that would exempt land-based aquaculture facilities from certain state building and energy code requirements, just as agricultural buildings are.  “In our world, salmon are livestock,” Thompson told Bar Harbor-based MDIslander.

The Sierra Club of Maine provided testimony against the bill, known as LD 1473, and it died in committee.

Cooke Aquaculture
Cooke Aquaculture of Atlantic Canada has farmed Atlantic salmon in traditional net pens in three areas of Maine since 2004.  Its southern-most cages are around Black Island, close to Bar Harbor.

Last August, Cooke self-reported the mass mortality of over 115,000 Atlantic salmon at two southern sites.  It said the deaths were a result of low oxygen levels in the pens. Maine Department of Environmental Protection found no violations.  The event was an issue of low oxygen in the pens, which is not a compliance issue, it said.

But the news that Friday morning in August about the die-off inflamed a public already smoldering about aquaculture. It came just in time for Sunday’s “Save the Bay” flotilla about 20 miles north as the seagull flies.