Green crab – with a bit of hot sauce 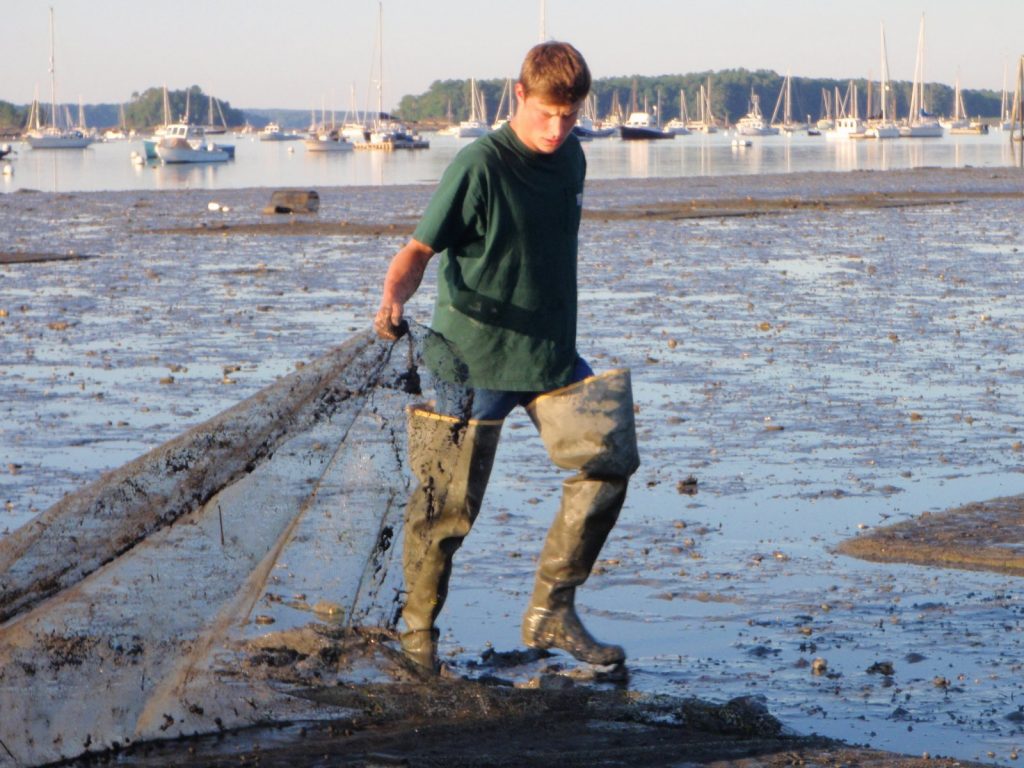 Brian Beal, professor of marine ecology at University of Maine at Machias and Director of Research at the Downeast Institute for Applied Marine Research and Education in Beals, Maine, says for years, he has been telling people that the solution for the green crab problem is to “eat our way out of it.”  He favors coming up with a dried green crab snack created from thumb-sized juvenile crabs, “a chip you could pop in your mouth with a bit of taco or hot sauce.”

Until the green crab snack product, like many others that have been suggested by researchers and entrepreneurs, is marketable and creates a demand for hundreds of thousands of pounds of trapped crab, Beal believes the best defense against Carcinus maenas, an invasive species from the North Sea that has decimated many a clam flat, is to use fencing or netting to keep them out of seeded flats.

Of the two, he prefers netting, which is set up on beds in a flat, much as a vegetable farmer will grow his crops in separate beds that are easily accessible for regular maintenance and care.  “Fencing,” Beal says, “is very expensive and difficult to maintain compared to netting, which is ‘easy to install,’ fairly easy to maintain and comes off the mud in a relatively straightforward manner.”  He adds that research data shows the netting can provide 75 to 80 percent survival of soft-shell clams up to the two-inch mark.

According to Beal, clams have disappeared from the mid-tide and low-tide areas where green crabs are most active. “My fear,” he says, “is once those high water clams are gone, what’s next?”

He believes it will come to the point that clam diggers will have to consider clam farming as an alternative route.  This is possible in Maine under state legislation passed in 1911 that permits towns to lease up to 25 percent of its intertidal area for aquaculture purposes.  Historically, towns have not used this option, but now, some towns are considering otherwise.  “If people could think about ‘Maybe it’s time for me to reduce my hunting and become a farmer,’ they might be able to make more money,” he says.

For 28 years, Beal has worked with town conservation programs to seed flats with soft-shell clam seed raised at the Downeast Institute, formerly known as the Beals Island Regional Shellfish Hatchery, which he helped to create in 1987.  He says his experience has taught him that anyone who seeds flats will have to use netting if they are going to have a viable farm and that they will have to be diligent about tending their farm.

“I have the feeling this could be like dominos,” he says.  “A new stage.  If one town leases part of its flats, other towns will look at what was the logic that made the town make that decision — that they wanted to do something about acres that are not productive and clammers who are not able to make a living.”

Developing a market for the predator

Numerous researchers, several of whom presented their findings at the 2015 Northeast Aquaculture Conference and Exposition (NACE) in Portland, Maine, are developing ways to utilize green crabs. They hope this will increase the demand, raise the boat price (currently at about 25 cents a pound in Maine) and make trapping green crabs a lucrative venture, which will in turn reduce their numbers.  The population of green crab has exploded in some areas because of warmer water temperatures due to climate change.

A variety of traps are available to harvest crabs.  Alan Young and others from Salem State University discovered that the Blanchard cylindrical trap invented by a high school student, Andy Blanchard, in Scarborough, Maine, and a trapezoidal trap from Brooks Trap Mill captured more crabs than others placed at the same location.  Herring turned out to be the most efficient bait.

Various uses for green crabs include pet food, fishmeal (although researchers from the USDA Aquaculture Center in Franklin, Maine have found the ash content unsuitably high for salmon), compost, fertilizer, pharmaceuticals, traditional Chinese medicines and utilizing the chitin for surgical procedures.  Culinary uses include crab broth, soft-shell crabs, and various dishes made with the crabmeat and roe.

Other than Beal’s whole juvenile crab chips, culinary uses require extracting the crab meat and roe, a laborious process until an entrepreneur from China invented equipment that can provide two kilos of crab meat per hour.  John der Kinderen of Arundel, Maine, and owner of Waste Not Want Not, described the machine at NACE while presenting his findings on “Underutilized Shellfish Products with Emphasis on Green Crab,” research funded by Maine Technology Institute.  Recently, der Kinderen has found a second technology from Norway that can extract 100 kilos of meat per hour.  He plans to test it with green crabs.

Der Kinderen also expressed confidence in an additional market for crab chitin, noting that it has pharmaceutical and surgical uses, and is found in many other products.

Luke Poirier and other researchers from Prince Edward Island, Canada, have looked into other options.  In Italy, the Mediterranean green crab, Carcinus aestuarii, a related species, is considered a delicacy in the soft-shell stage and sells to a high-end market. They said a major challenge for developing this avenue is determining when the crabs are molting, which is evident in the Mediterranean species, but not as obvious in Carcinus maenus.

Beal sees promise in many of these suggestions, but with the caveat that the new technology for extracting meat may be better used the larger Jonah and rock crabs that are abundant in Maine.  “I don’t want to be the bearer of bad news,” he says, “but green crabs have been around 110 years in Maine.  In that time, we have come up with mitigation solutions, but not with use solutions.”