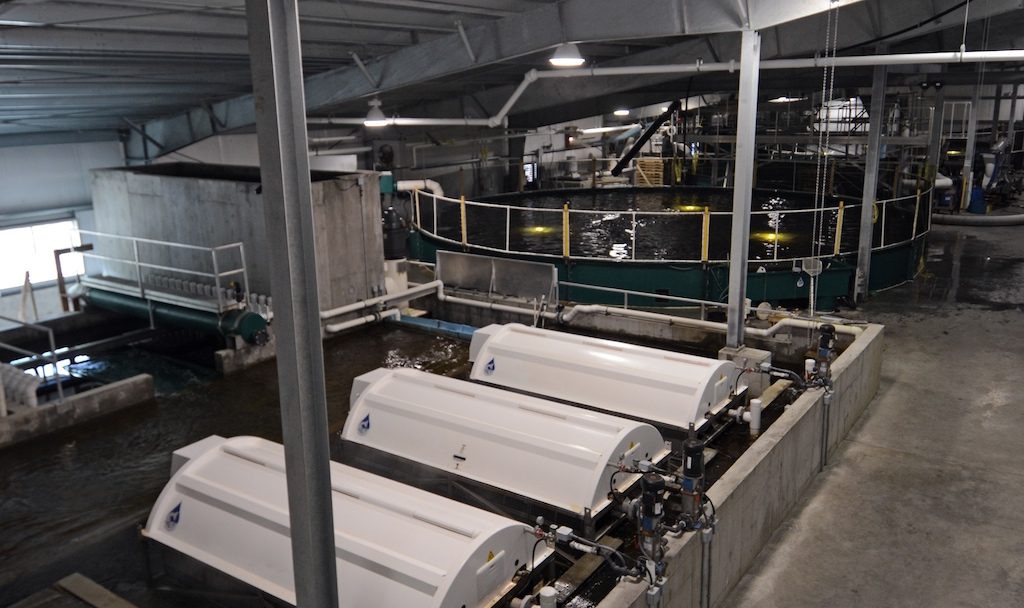 The real question for land-based closed-containment systems is whether they can grow fish on a commercial scale profitably and sustainably.

A few years ago during an interview about his new book “Climate Change and Energy in the 21st Century” Nobel Laureate Burton Richter (Physics, 1976) commenting on the use of technology solutions for reducing CO2 emissions noted: “The mandate to utilities should be to reduce emissions.  It shouldn’t be to use certain technologies”.   I don’t normally read the Stanford Reporti, but this particular article resonated with me as it applies to the on-going debate advocating for a “mandatory transition toward some form of closed containment technology for salmon farms”.

The idea that we should adopt new technology to improve salmon farming practices is not new.  Future Sea Technology Inc. “bags” was one technology supported by the then Salmon Aquaculture Implementation Policy (SAIP) that emerged in Canada out of the Salmon Aquaculture Review in the mid 1990s.  It didn’t take long to realise that Future Sea bags were not the solution that was being marketed to the industry, public and environmental groups.  This is reflected in the comments in the Final Report of the Special Committee on Sustainable Aquaculture (SCSA)iii that noted:  “Durability of the barrier is critical: this durability would exclude membrane technologies that have been in development”.  This comment preceded a recommendation for a “…a rapid, phased transition to ocean based-based closed containment technology begin immediately”.  Unlike the SAIP, this particular recommendation represented a mandate for a single technology – one that hadn’t even been tested.

Ironically, the SCSA report summarily dismissed land-based closed-containment solutions due to high energy costs at a time when recirculation aquaculture systems (RAS) had been producing smolts in several countries around the world, including BC, for years.

Sweet Spring, producer of “super green” (Seafood Watch) coho salmon was billed for many years in the media as an example of a successful, land based, closed-containment salmon farm. However, poor growth of the fish and mounting operating losses caused the farm to close its doors before they could hit their modest production target of ~200mt.

Sustainable Blue, a Nova Scotia land based sea-bass/bream farm converted to grow Altantic salmon, lost their first group of harvest-ready fish to an electrical system fault early this year. While the company is still in business, the loss will be a major set-back as the economic models developed for RAS to date suggest that there is little margin for error.

More recently, Langsand Laks, based in Denmark, also touted as a “first” in the race to demonstrate commercial scale (1,000 mt) land-based, closed-containment salmon production announced it is shutting its doors to be “reconstructed and rebuilt due to geographical issuesiv”.  Their business model looked promising with lower capital and operating costs than that being reported in North-American RAS production models; however, there were clearly other issues at play.  While the operation intends to be back up and running in 2015, the setback will no doubt affect their bottom line and anticipated profit returns.

Despite these failures, it is important to continue to research and develop this technology as an alternative to net pens – not a replacement.  That the technology works for growing market size salmon is not the issue.  Researchers have been demonstrating this for some time.  The real question is whether or not it can be done cost effectively at commercial scale. The impediment to doing this has been high capital costs coupled with high risks.  The 2013 Report of the Standing Committee on Fisheries and Oceans on Closed Containment Salmon Aquaculture made several recommendations with respect to funding, financing and establishing a fund for aquaculture innovation, the latter representing a major gap for aquaculture development in Canada. Interestingly, they didn’t recommend a mandate to transition the industry to land-based closed-containment production.

The Kuterra project, being developed by the ‘Namgis’ First Nation and Tides Canada, near Port McNeill, BC, could actually be the “first” land-based closed-containment system to produce commercial quantities of harvest size Atlantic salmon.  Designed to ultimately produce 2,500 mt/year, the real question is whether or not it can be done profitably. The project has taken a cautious approach to expansion and it will be a long time before we can determine if it is financially viable.

A key, and the most important, feature of the Kuterra project is that all the information learned will be made publicly available providing a project assessment lens that to-date has not been accessible for many of the projects that have preceded it.  If it fails we will know why.  If it succeeds we will have a formula and a template.  We have already learned a great deal.  For example, we know that some operational costs are not simple to model and depend on design-specific elements and there are increased costs associated with remote locations.  We are also finding some capital costs are much higher than expected.

Assuming that many of the projects being planned are successful, which I believe is possible, another important consideration is that given the need for affordable seafood, how much premium priced salmon will the market bear given that most RAS salmon production models require a price premium to offset the high capital and production costs?  Not unlike organic production, which currently represents less than 4% of food sales in the US according to the Organic Trade Associationv and assuming that land-based closed-containment salmon could do better and capture 5% of the farmed salmon market, it would represent approximately 125,000 mt of production on a global basis – a significant production target.

It seems to clear to me that to realise the potential of this technology we have to be reasonable in our expectations.  First, land-based systems are not a solution to a net pen culture problem, rather another system for producing salmon – or any other fish for that matter. Second, the technology has limitations and many of the claims being made about benefits and performance have, unfortunately, relied too heavily on exaggerated sales and marketing pitches.  Third, the market price of salmon, which is out of the farmers’ control, can have a huge impact on profitability. And finally, catastrophic mechanical failures can and do happen.  So, where will we be in five years?

It is difficult to estimate the global potential production of salmon produced in RAS systems since many of the projects are in early stages.  Nonetheless, in a recent presentation on Current Trends in Land-Based Aquaculture at the Aquaculture Canada Conference held in St. Andrews, New Brunswick, Steve Summerfelt, Research Director for the Freshwater Institute in West Virginia and a leading expert in the field of RAS, estimated there is approximately 5,000 mt of capacity around the world, noting projects in Denmark, Poland, US, China and Canada. This represents less than 0.25% of global salmon production. When the question of production capacity in five years was posed to an expert panel, the answers varied from 10,000 to 20,000 mt, which represents less than 1.0% of global production. I found this remarkably reasonable, if not conservative!  It suggests to me that the industry sees the potential but doesn’t see land-based systems becoming the dominate production system in the near future.

Based on my ‘back of the napkin’ calculation, there is room for significant growth in land-based closed-containment aquaculture to compliment production of salmon in traditional net pens.  This model is already in place at vendors such as Whole Foods.  Under their “Responsibly Farmed” seal, Whole Foods have developed quality standards for aquaculture that incorporate third-party verification and allow sourcing salmon from environmentally responsible net pen and closed containment producers in Iceland, Norway and Scotland.

The mandate to salmon farmers – all fish farmers – should be to produce fish sustainably, not to use certain technologies.  Net pen operators have been doing this for years through the development of collaborative best management and environmental practices.  Land-based growers need to do the same to ensure energy and resource utilization for construction materials, feed, use of chemicals and other inputs are managed in a sustainable way.

Ultimately, land-based closed-containment production systems such as RAS will be another tool in the aquaculture food production tool-box; accepting that some tools are more expensive than others.  Given the predictions from the FAO and World Bank on the future demand for seafood, it is clear that we will need all available tools to meet this demand.

Myron Roth, Ph.D., P.Ag.,has been involved with aquaculture research, production, biotechnology and regulatory policy for over 27 years.  He is currently the Industry Specialist, Aquaculture and Seafood with the BC Ministry of Agriculture.  He can be reached at myron.roth@gov.bc.ca.