Scientists at the University of Melbourne have discovered that farmed salmon have an inner-ear deformity not found in their wild counterparts and have linked it to accelerated growth rates in fish farms. 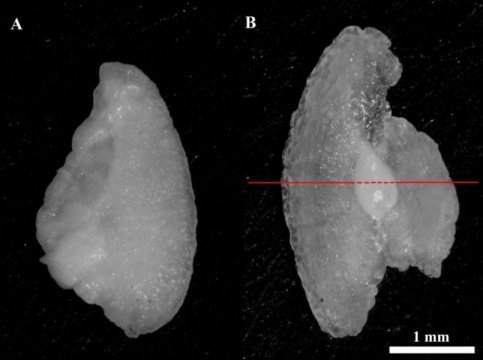 The study found that farmed salmon have abnormal otoliths — tiny crystals in a fish’s inner ear, which detect sound, similar to humans’ ear bones. Normal otoliths are made of the mineral “aragonite,” but deformed otoliths are partly made of “vaterite,” which is lighter, larger, and less stable, according to the University of Melbourne.

Vaterite was “seemingly caused by a combination of genetics, diet, and exposure to extended daylight, all of which differ between farmed and wild fish,” said the study. But one factor — growth rate — stood out as a cause. In fish farms, the conditions are such that the fish grow faster than their wild counterparts by being exposed to varying light and temperature or being fed high-nutrient feed, for instance.

“We evaluated the prevalence of vateritic otoliths from two captive rearing studies which suggested that fast growth, due to environmental rather than genetic control, led to vaterite development. We then tested this by varying light and temperature to create phenotypes with different growth rates, which resulted in fast growers (five times larger) having three times more vaterite than slow growers,” wrote the authors, led by Tormey Reimer of the University of Melbourne’s School of Biosciences.

While the deformation was first recorded in the 1960s, Reimer’s team was the first to show that it affects more than 95 percent of fully-grown hatchery-produced fish globally.

The latest study also shows that fish afflicted with vaterite could lose up to 50 percent of their hearing.

While the scientists said they still don’t know how hearing loss affects production, having hearing-impaired fish as a result of farming methods “raise serious questions about the welfare of farmed fish,” says study co-author, Dr Tim Dempster of the University of Melbourne.

“In many countries, farming practices must allow for the ‘Five Freedoms,’ which are freedom from hunger or thirst; freedom from discomfort; freedom from pain, injury or disease; freedom to express (most) normal behaviour; and freedom from fear and distress,” said Dempster.

The scientists hope for further research on how to reduce the risk of vaterites while keeping growth rates intact.