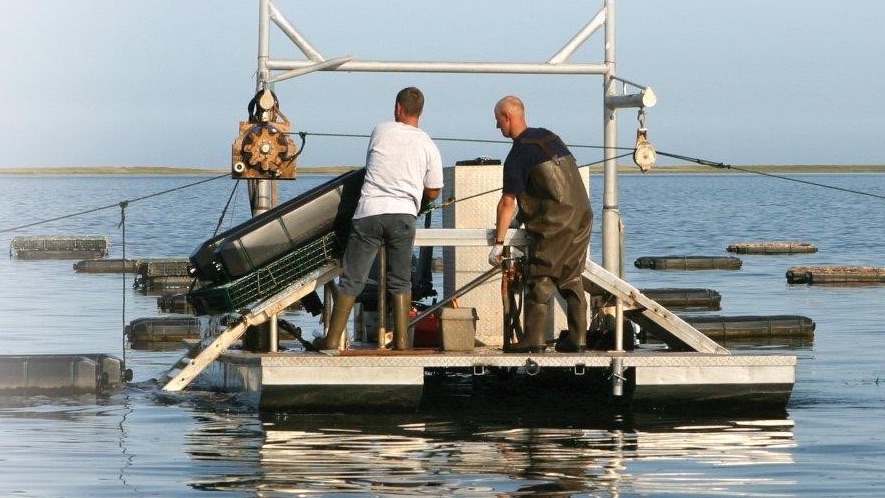 Off-bottom farming is creating a new industry and is giving people of the Gulf Coast a chance to reinvent themselves.

“Just as the health of any environment can be adversely affected by a single event, sometimes all it takes is the introduction of one new element to turn a situation around,” said Rhéal Savoie, President of BBI. “The common thread tying together the work of the marine biologists, commercial oystermen, equipment manufacturers and designers is a specialized wire called Aquamesh.”

When exposed to marine environments, steel, like nearly all metals, will corrode which impacts oyster cage durability, the level of maintenance and the return on investment for a shellfish grower. Aquamesh is manufactured from high-grade premium steel that is hot-dip galvanized after welding with a thick layer of zinc that completely surrounds the weld to prevent the steel from corroding. The wire is then covered with a marine grade PVC produced by Riverdale Mills Corporation. The coating is fuse-bonded to the wire, forming a protective layer that resists algae growth and biofouling, and prevents corrosion.

BBI’s OysterGro product is a system of wire cages, made exclusively with Aquamesh,

floating on two large plastic pontoons that suspends the oysters just below the surface of the ocean where the water is warm and the oyster’s food source is more plentiful.  The system was designed by Savoie and oyster farmers of Bouctouche Bay, Canada.  “In the northeast, it takes 7 years for oysters to mature on the seabed and only 25 percent have any commercial value,” said Savoie. “We needed to figure out a way to suspend young oysters in the water, versus planting them on the sea bottom, so they could fully mature in half the expected growth time.”

Since 2000, Dr. John Supan has worked with oyster farmers in Louisiana using off-bottom systems to produce a steady supply of consistently premium oysters. “The capability of allowing timely aerial drying to control biofouling and the ability to sink the cages to reduce storm loss are hallmark features of OysterGro.  The Aquamesh wire used in the system has superior corrosion resistance and durability over imported wire.”

William Walton, Associate Professor and Marine Fisheries Extension Specialist at Auburn University and one of the leaders in Auburn’s oyster farming efforts, is working with independent farmers and helping them implement off-bottom farming techniques to yield some of the finest premium oysters on the Gulf Coast.  Alabama oyster industry accounts for hundreds of millions of dollars per year.

“A number of Alabama oyster farmers have opted to use the OysterGro system and we use it for our research. The system allows the grower to decide when low tide happens, how long it lasts and how frequently it happens. The wire cages have held up very well, with some cages in the water for over six years.”

Whether caused by acts of nature or man, the culture and landscape of the coastal zones are changing.  Off-bottom farming is creating a new industry and is giving people of the Gulf Coast a chance to reinvent themselves.