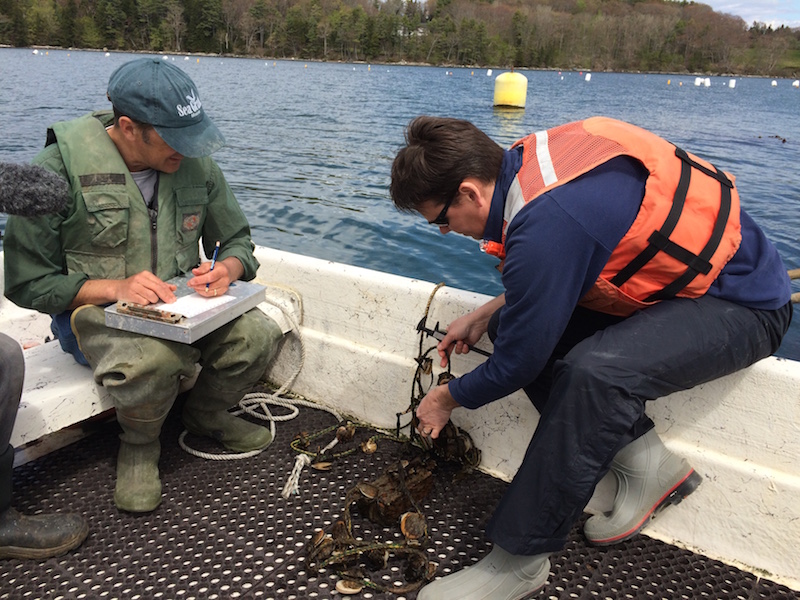 Bringing the Japanese ear-hanging method of scallop farming to Maine

Shellfish farmers in Maine are testing the use of a scallop farming technique, which was developed, and saw great success, in Japan. The ear-hanging method of scallop farming allows for the growth of significant meat by allowing scallops to redirect energy that would otherwise be used elsewhere. With support from small business development firm Coastal Enterprises Inc (CEI), Maine shellfish farmers have already started testing the technique.

Japan’s Aomori Prefecture, which has long been a source of cultural and informational exchanges. Hugh Cowperthwaite, fisheries project director for CEI, says that an envoy from Maine first examined the technique and Japan’s scallop industry in general during a visit in 1999. At the time, it was determined that Maine was not ready for such an industry. When Cowperthwaite returned to Japan in 2010 with another group from Maine, he felt the time was now right.

“There’s a lot of interest in sustainable aquaculture and new opportunities and given the challenges with wild species and harvest and regulations and climate change, we decided to take a very focused effort to move the needle on this again,” says Cowperthwaite. “That rekindled the interest on the 2010 trip, and the last couple of years I’ve been putting together some next steps to where we are now.

The ear-hanging method is based on sound science, says Dana Morse of Maine Sea Grant College Program and an associate with the University of Main Cooperative Extension. While Morse is still trying to get some of the relevant Japanese literature translated, the basic concepts are easily communicated.

“The general operation and some of the science behind it indicates that when you keep a bivalve in a culture environment, whether it’s oysters or mussels or scallops, growth rate in terms of shell length seems to go up, a condition index seems to improve and the attribution of that is usually to better feed quality and lower need for the animal to spend energy creating a thicker shell. Or in the case of scallops, less energy spent swimming away from crabs.”

Mark Green, a professor of marine science at St Joseph’s College of Maine, worked with Morse on some early experiments with the technique. While many were skeptical that the technique could be utilized in different waters with a different species of scallop, Green was not willing to accept that and took several hundred sea scallops, drilled holes in their hinges by hand and hung them with zip ties in the water.

“I basically did everything necessary to kill them – I didn’t forget about them, but you have to get in a boat and go three miles out to where they’re hanging and do all these different things and it wasn’t a priority in my life. I checked on them periodically,” says Green. “But a year and a half later they were just huge. Covered in bio-fouling, these huge glorious scallops, I think, had less than one percent mortality. Because they hang there, their shells are a little thinner but their meat is a little bigger. They’re eating all the time and they’re working their abductor muscle, open and close, open and close.”

Green says the results are similar to rope-grown mussels, which often have significantly more meat than wild-caught. Another benefit of the technique is the fact that they make very efficient use of space.

“You’re hanging these things three dimensionally in the water,” says Green. “You can grow a lot of tremendous scallops on a very small footprint. On any of these dropper lines, depending on the depth, you could have a couple of hundred scallops easily.”

The height aspect of the technique is one of the reasons why the current testing is so important, says Morse. At different heights on a line, scallops will be exposed to different levels of light penetration, temperature and salinity as well as the varying effects of tides and waves. And those aspects could be fairly different from one area of Maine to another.

“If you envision a single line 30 feet long, we’re already seeing things where we’re going to get different growth rates at different stages along that line,” says Morse. “Part of the job in these early years is to understand where all the sweet spots are for all these things and to try to optimize the farming operation in terms of those variables. If you take a certain bay, it may be that the surface waters are no good but if you go down to a certain depth, maybe the conditions are good there.”

Moving forward from the testing phase and into production, one of the crucial steps will be obtaining the proper equipment. The technique is simply too labor-intensive if every scallop must be drilled, hung and cleaned by hand. Japanese scallop farmers developed several machines to make the process faster. One of these machines drills holes in the hinges of the scallops, another hangs them on lines, and another, one that’s mounted on a boat, automatically pulls the lines up and runs the scallops through a pressure washer system to remove bio-fouling. CEI is planning to purchase the line-hanging and drilling machine initially, and will purchase the cleaning machine eventually.

Cowperthwaite is organizing another trip to Aomori Prefecture for October, this time bringing with him some Maine shellfish growers. His goal is for the group to return from that trip not just with more knowledge of the ear-hanging technique, but also with the line-hanging and drilling machines. The equipment is pricey – all three would total around $70,000, says Cowperthwaite – but in the early stages they will look into working out an arrangement where growers who are experimenting with the technique could share the machines among them.

If the technique proves effective and compatible with the environment in Maine, would-be farmers will have evidence they could present when securing loans for purchasing the machinery. However, for Mark Green, the technique is already proven; it just needs to gain momentum.  “It works,” says Green, who is planning on putting another 50,000-70,000 scallops in the water this September.  “The phase now is that someone needs to kick in $50,000 and blow this thing up. Someone needs to start a big farm. We’ve got the old ‘paralysis by analysis’ that happens frequently in science. And as a scientist, I’m guilty of it too. We always need more data but at some point we need to just do it. They grow great, the meat is great, very low mortality, no sea duck issues.”

Green adds, “ten years from now, someone will be growing a million scallops in Maine. It may as well be us. I would love to be able to start the first model farm and get scallop aquaculture moving in the state of Maine.”