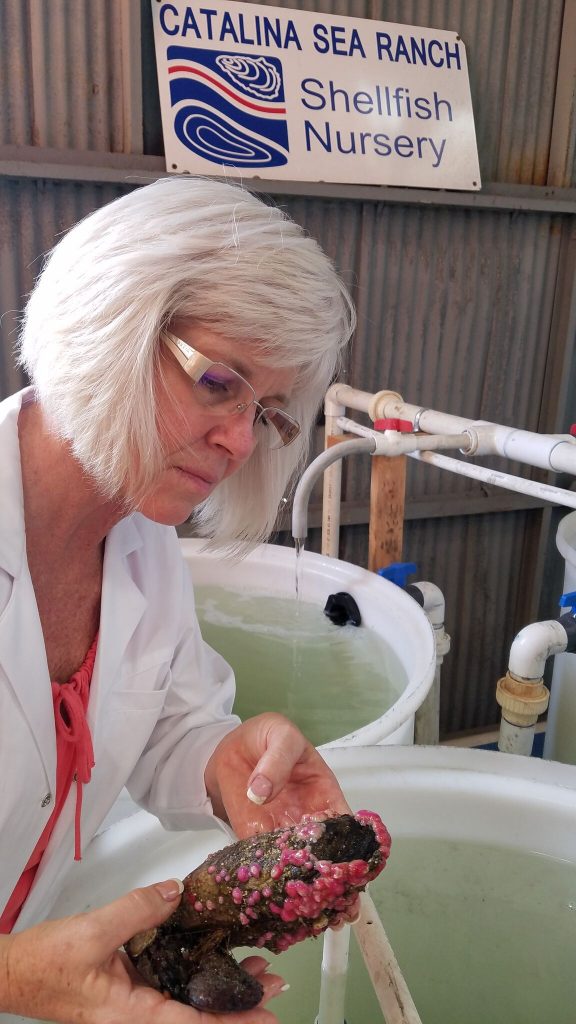 next year when it harvests its first crop of mussels.

Catalina Sea Ranch’s initial crop of 30,000 lbs of mussels is a small, experimental crop, but much more is coming, according company CEO Phil Cruver.

The domestic source of mussels could put a major dent in imports from Canada’s Prince Edward Island, which currently supplies the US with 45 percent of its mussels.

The company’s objectives are in line with NOAA’s goal of increasing US marine aquaculture by 50 percent by 2020. In fact, in July, NOAA awarded Catalina Sea Ranch a Small Business Innovative Research contract to improve seed production for marine shellfish aquaculture in the US. The two-year, $400,000 phase II contract will allow Catalina Sea Ranch to scale up and commercialize new selective breeding methods. The contract follows a $95,000 phase I contract previously awarded to the company.

The USDA also awarded Catalina Sea Ranch an eight-month, $100,000-research contract in August to study cryopreservation methods for mussel larvae so that they can be seeded in the ocean year-round.

Offshore mussel farming essentially does not have any environmental impact, Cruver says. The Mediterranean mussel (Mytilus galloprovincialis), which has a “green – best choice” sustainability ranking from seafood distributor Santa Monica Seafood, filters nutrients out of the water and requires no supplemental feed. Suspended from ropes in the open water on the San Pedro shelf, the mussel is unlikely to get diseases, and upwelling from the deep ocean provides a constant supply of nutrients. The conditions are ideal for this species; oil rigs in the area have to be periodically scraped of mussels, barnacles and other creatures.

Catalina Sea Ranch has no interest in raising finfish such as salmon or bass, though the company is exploring raising other shellfish such as abalone and scallops, as well as sea vegetables such as seaweed.

“We don’t want to feed anything. We want filter feeders that eat things out of the water,” says Cruver.

It took years of groundwork for Catalina Sea Ranch to start seeding mussels. In 2011, Catalina Sea Ranch applied for a US Army Corps of Engineers permit, and got it after four years. Cruver never considered establishing a shellfish farm in California state waters because of the thicket of state regulatory agencies and the difficulty of navigating them, he says. Regardless, the California Coastal Commission unanimously approved the US Army Corps permit in January 2014.

With permits – and financing – in hand, Catalina Sea Ranch is uniquely positioned to win the contracts like the several it was awarded by NOAA and the USDA, Cruver says, since the agencies favor companies that can commercialize and scale up research.

The $400,000 NOAA contract will allow Catalina Sea Ranch to commercialize a unique selective breeding technique that the company first developed in the lab, using the previous $95,000 NOAA contract.

“In the past,” says Cruver, “selective breeding was done visually. So you see a mussel and it has a bigger meat-to-shell ratio. You see a male and a female and you breed them. So over 50 years you have a higher-performing shellfish.”

But Catalina Sea Ranch is doing the reverse – and selecting genetically – rather than visually. Researchers with the company are identifying the genes that correlate with undesirable traits, such as a low meat-to-shell ratio. To eliminate those traits, a chemical is poured into a tank with the mussel larvae. The chemical kills all the mussels with the undesirable genes, leaving the rest to breed again.

Commercialization, as the grant requires, is a matter of scaling up – going from four or five beakers in a lab to millions of pounds of mussels in the sea. That’s what Catalina Sea Ranch is working on now.

The company’s other research grant – the $95,000 in funds from the USDA – will help it overcome a major obstacle that shellfish growers around the world face: how to seed continually when most mollusks only spawn twice a year.

The answer is a better cryopreservation technique. Consultants for Catalina Sea Ranch have frozen mussel larvae and revived them with a 70 percent success rate, Cruver says, but 10 percent would be good enough.

“We don’t have to sit and wait for these babies to spawn. We just open up the freezer and stick the vial in the tank,” Cruver says.

A second, phase II grant may be available to commercialize and scale up that research, and Catalina Sea Ranch intends to apply for it.

Better selective breeding and cryopreservation techniques will allow for year-round seeding and plumper, more desirable shellfish. Other traits can also be selected, such as resistance to ocean acidification and a stronger byssus thread that allows the shellfish to cling to the ropes better.

The result, should Catalina Sea Ranch succeed, will be a more mussels in the US from more diverse sources. Rather than shipping mussels from Eastern Canada to Southern California, people in Los Angeles will be able to eat mussels grown in local waters less than a day after they’re harvested.

And demand is high; Cruver says the mussels he plans to harvest from the 100 acres are already pre-sold. “It’s all done. We’re sold out.”