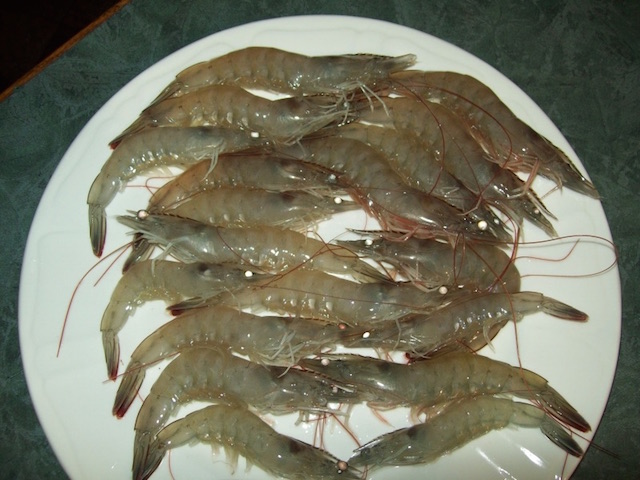 Ontario shrimp farmers follow unique US model for their farms

Following a model established in the US, where growers in Indiana and Maryland are converting animal barns into shrimp farms, father and son Paul and Brad Cocchio have been growing Pacific white shrimp in Campbellford Ontario for the past year.

At First Ontario Shrimp, 2 hours northeast of Toronto, the family has equipped a 200×40 foot hog barn with nursery tanks and 16 concrete raceways.  Specific Pathogen Free (SPF) post-larval shrimp are brought in from Florida and spend 1 month in a nursery and about 12 weeks in grow out.  The zero exchange bio floc system is producing about 800 lbs a week which is sold fresh directly to consumers and restaurants.

Southeast of Toronto in the town of Aylmer, another company, Planet Shrimp, is converting part of a former cigarette manufacturing plant into what they say could be North America’s largest indoor shrimp farm.

Starting with 65,000 sq feet, Planet Shrimp is currently finishing four raceways and a nursery system.  Their aim is to use about 1/3 of the tobacco plant when they build out to 225,000 sq feet by 2020.  Company founder and CEO, Misha Andric, and his business partner, Marvyn Budd, hope to harvest their first crop by May of 2016. They are looking to scale up production to 3 million lbs annually.

In a phone interview with Aquaculture North America, Andric would not divulge his proprietary grow out system only saying that it has a “small amount of bio floc” and that they are applying for a patent. “It’s very different from everybody,” says Andric. He says they are consulting with a “high level” shrimp scientist from the US who has practical knowledge of commercial indoor shrimp farming.  They will use municipal water, but he declined to describe his heating system.  Media reports have described it as a “multi-tiered shrimp hotel” that will have 14 miles of production raceways.  Andric says initial costs were “several millions of dollars”.

‘species to be grown” by Ontario Agriculture.  That work paved the way for Planet Shrimp.  Andric says they received lots of support from the Ontario Ministry of Agriculture.  Locating in an economically depressed area has helped.  Indeed the Ontario Government recently announced a $237,000 Local Food Fund grant for First Ontario Shrimp to help pay for production technology.

Both First Ontario and Planet Shrimp are targeting the huge North American frozen shrimp market as well as the fresh, local, sustainably grown, free of antibiotics and hormones market.

First Ontario has received Ocean Wise approval and Planet Shrimp has both Ocean Wise and Sea Choice.  Andric says they are aiming at full traceability from the plate back to the nursery.  Future plans include developing a hatchery and their own broodstock. They will be using Ziegler feeds but are working with the University of Guelph on a Canadian sourced feed “So we can say that the product is all from Canada, says Andric.

Planet Shrimp product will first appear in restaurants but the company hopes to develop a distribution chain to deliver fresh product to retail at a reasonable price.