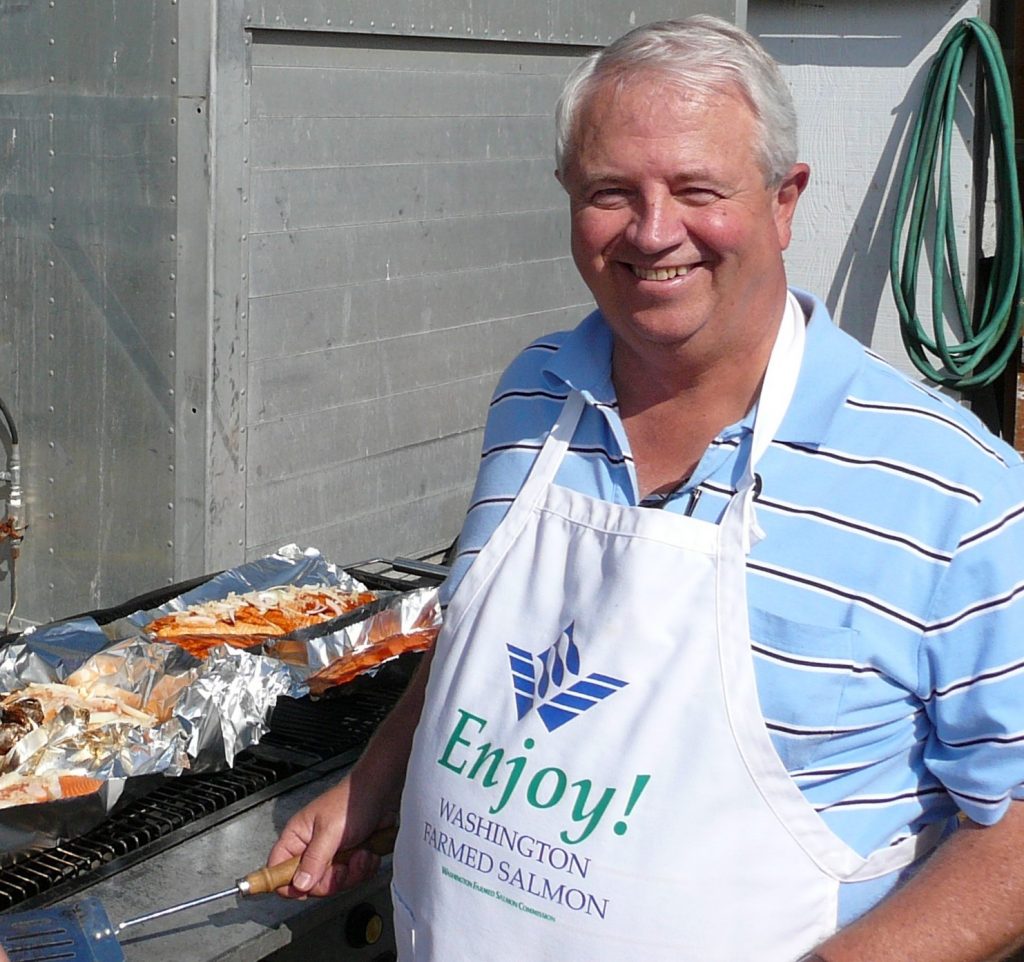 Former WFGA lobbyist, Jim Zimmerman notes Dan Swecker’s most effective lobbying efforts was the orchestration of a salmon barbeque—where, armed with grills and high-quality farmed salmon from WFGA members, “Dan would put on his chef’s apron and cook salmon the way it should be cooked.” Photo: Northwest Aquaculture Alliance

Wanting to see success for the U.S. aquaculture industry, Swecker first entered the sector as executive director of the Washington Fish Growers Association (WFGA), an organization he helped launch in efforts to promote fish farming in the state. In 1993, Swecker became the Washington State Senate and was the vice-chair of the Agriculture and Environment Committee, for a decade.

In January 2019, Swecker retired from the WFGA and became a senior advisor to the Northwest Aquaculture Alliance (NWAA). In December 2019, he was honoured with a Lifetime Achievement Award for his tireless advocacy of the aquaculture industry, which included authoring numerous opinion pieces on the need for the voice of science in the debate on aquaculture.

For Swecker, the aquaculture industry was a means to create jobs, as well as produce affordable, local seafood. Therefore, he fought to streamline the permitting process for both freshwater and marine aquaculture.

Together, Swecker and his wife Debby started their own intensive salmon farming operation in Rochester, Wash., which was an impressive feat at the time, given the level of development in the aquaculture industry.

“A fish farmer at heart, he always had the success of the entire aquaculture industry on his mind,” said Bill Dewey, Director of Public Affairs for Taylor Shellfish Farms. “When the legislature eliminated funding for the State Aquaculture Coordinator, Dan stepped up to fill the position on a volunteer basis. If there was legislation Dan thought might harm or help shellfish growers, I could always count on a call from Dan to give me a heads-up,” he said.

Prior to his start in aquaculture advocacy, Swecker was a military veteran who earned a Purple Heart, Bronze Star, and 25 Air Medals for his valour as a helicopter pilot in Vietnam.

A memorial service will take place Friday, September 17, at 2:00 p.m. at the Centralia Community Church of God, 3320 Borst Ave., Centralia, Wash. An outdoor reception will follow.