How a rainbow trout farm is turning rock into green 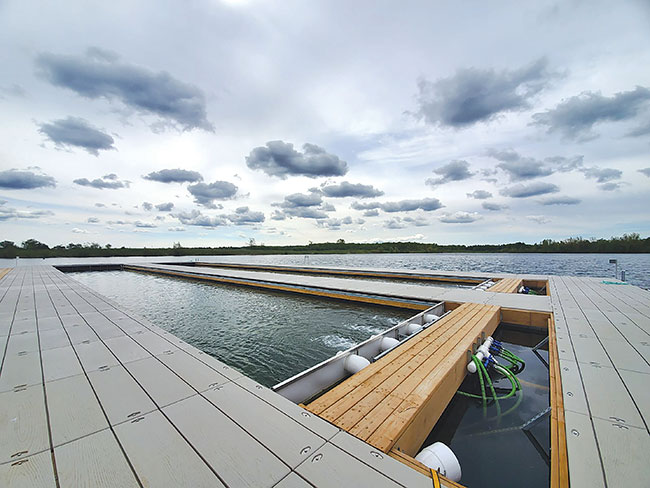 One of the biggest challenges in aquaculture development is siting production near the largest urban markets. Producing seafood in non-coastal areas is becoming more viable as technology advances, but expansion and development for flowthrough farmers and lake net-pen farmers is limited.

There are many regulatory hurdles to overcome, as well as political and public sentiment to be won. Recirculating aquaculture farms are starting to appear near inland urban centers, but the industry is still developing and overall product contribution to the market is negligible so far. Most production remains coastal, and most products need to be shipped a good distance.

Canadian aquaculture startup, Izumi Aquaculture, has overcome it all. Cited in the MacMilliam gravel pit near Cambridge, Ont., the company has developed its own concept rainbow trout (Oncorhychus mykiss) farm for six years, improving the technology and methods to raise rainbow trout with a unique method in a unique location.

Rehabilitating gravel pits
Gravel pits are created when gravel is excavated from the earth with machinery and removed for human use. Aggregate companies dig out as much gravel as they can within their lease, using pumps and specialized equipment to work below the water table to extract all the gravel. Once the gravel is depleted, the large pit fills with ground water, creating a “lake.” Municipalities are not fond of these gravel pits, viewing them as limited-use ponds, unfit for any development or further commercial operation.

The aggregate companies are obligated to rehabilitate the land, to create an aquatic and shoreline ecosystem. This is usually accomplished by fertilizing the lake and slowly adding plants around the shoreline. Once the lake has been established, the value of the land is still marginal. The land is rarely desirable for further development, even if it is lakefront, and is often surrounded by other active gravel pit operations.

But Izumi Aquaculture identified the huge potential for fish farms in these “limited-use ponds.”

“We have a great partnership with the aggregate companies because we have established a solid, mutually beneficial relationship,” CEO Ryan Smith explains. “Our farms allow for advanced rehabilitation of gravel pits, transforming them into vibrant ecosystems while at the same time, the farms run as a viable and sustainable food business.”

By establishing a floating farm on a gravel pit lake, rehabilitation is sped up through the infusion of “clean” nutrients. Instead of using traditional lake fertilization methods (applying fertilizer over a series of years to stimulate plankton growth) nutrients are provided to the lake in the form of fish waste.

Vegetation and plankton benefit from the nutrients provided by the fish farm, boosting growth. Instead of multiple years to establish an ecosystem, the fish farm allows for more advanced ecosystem establishment in a fraction of the time, including aquatic vegetation and fish populations. After initial ground work , the fish farm is added.

“The farm is sized specifically to the volume of the lake,” says Smith. “We monitor the nutrient levels every day to make sure the lake chemistry is stable.”

By sizing the farm correctly, the vegetation in and around the lake has the capacity to use up the nutrients from the fish farm, preventing eutrophication. The lake at the concept farm currently has a healthy population of minnows (Cyprinid species) and bluegills (Lepomis macrochirus) and is surrounded by lush shoreline habitat.

Pristine private waters
Because the lakes are private and there is no water exchange with natural water bodies, licensing is less complicated. There is no risk of escapes or disease transfer to or from wild fish. Being former aggregate extraction sites, the land is cleared and there is power to the site or easily connected. There are no home owners up-in-arms or public outcry. On the contrary, municipalities are overwhelmingly in favor of developing these lakes in any productive way they can.

Instead of one to two years, the time to be fully licensed in a gravel pit is a couple months.

“One of the biggest advantages to farming in gravel pits is proximity to markets. Here, we are less than an hour from the Greater Toronto Area. Because of the abundance of these gravel pits, we can keep transport costs down by establishing sites close to our customers as we grow,”says Smith.

Floating raceway technology
Instead of a square or round pen, Izumi Aquaculture’s floating raceway is 12 feet across and 100 feet long. The walls of the raceway are made of a solid material, not netting. When water is pumped in at one end of the raceway, the pressure from the flow pushes out the sides of the liner to create flush walls and semicircular channel. The soft walls minimize damage from rubbing that can be seen in concrete raceways. Water flows down the length of the raceway past the fish into a baffle system where solids deposit before effluent flows into the lake. This fish waste is collected daily to control the nutrient release into the lake and is used as a resource.

Water is supplied from the lake through an uplift system. There are no pumps onsite, only a series of blowers that provide uplifted water to the head of the raceway.

Several different prototypes were tested in the last six years, before the current sized raceway was settled on as the standard.

“Our new systems are made from interlocking docks that slide together, allowing for easy setup and manipulation. Like Lego blocks, we just add the right number of raceways and click them together. Our whole operation is built on low infrastructure costs and our farms are easy to put in and remove.”

There are no buildings on site, instead shipping containers are converted into buildings to house equipment, an office, and the blowers.

“Everything here can be removed within a couple months,” says Smith. “Our company can come to a site and setup a farm to stimulate the rehabilitation of the lake and operate a viable fish farm. If the pit owners are only looking for rehabilitation and have their own plans for lake development, our company can come in, run a farm for a few years to boost the ecosystem, and then be removed so the lake can be developed.”

Turning waste into resource
By designing the floating raceway to allow solid waste collection, Izumi Aquaculture has focused on turning fish waste into a resource.

Izumi recently participated in the Circular Meal Program with the City of Guelph. Fish waste from Izumi was applied to potato crops. Spent grain from a brewer and waste yeast from a baker was fed to insects at an insect farm. Insects were also incorporated into fish feed at Izumi. Chefs used these foods, all created from waste, to construct three creative menus.

Izumi has also started its first trails adding aquaponics to their raceways, experimenting with floating rafts with vegetable and edible flowers.

Future expansion
“Our trout are already found on store shelves in Ontario and there is a huge demand for more. We have a great partnership with Longo’s grocery store chain,” said Smith. After six years of running the concept farm, Izumi Aquaculture is ready to scale.

The first expansion of four farms is on schedule for 2022 with 10 more scheduled to open in 2023. A concentration of new farms is being planned around the current farm outside of Cambridge to meet established local demand. Further farms are opening east of Toronto, the Ottawa area, as well as two in Northern Pennsylvania.

To supply fingerlings, Izumi Aquaculture recently purchased Linwood Acres Trout Farm near Port Hope, Ont. and began adapting it into a fingerling production hatchery to meet their growing need. With a low capital expense and opreations expense model, and a solid partnership with large aggregate companies with gravel pits across North America, Izumi Aquaculture is poised to explode into the aquaculture market. The ability to rehabilitate nature and establish ecosystems through a viable aquaculture business creates the kind of social license and goodwill that most aquaculture operations only dream of.