Much has been said about aquaculture’s supposed risk on wild salmon but little is known about its role in helping restore them. Guest columnist Joel Richardson of Cooke Aquaculture discusses how aquaculture technology is key to restoring wild Atlantic salmon populations in Canada’s maritime provinces. 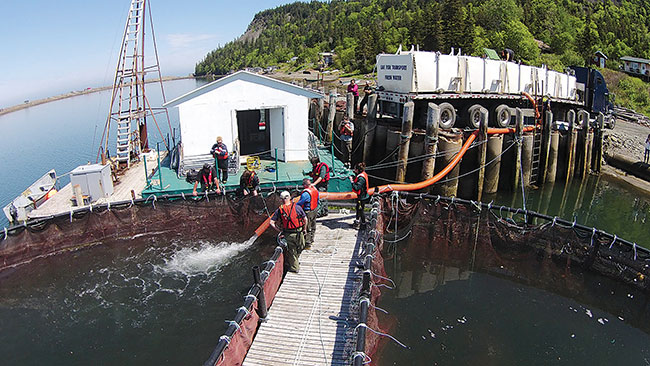 Juvenile wild Atlantic salmon collected from their native rivers are raised in the conservation farm run by Cooke Aquaculture until the fish are ready to be released back to their home rivers, as pictured here (Photo: Cooke Aquaculture)

Wild Atlantic salmon populations in the Inner Bay of Fundy are at risk of extinction but with the help of the world’s first wild salmon marine conservation farm, they are making a comeback.

This past July, the Resource Conservation team at Fundy National Park recorded over 100 salmon in park rivers, the highest number of returning salmon counted since 1989.

The Bay of Fundy winds its way between the Canadian provinces of New Brunswick and Nova Scotia. Wild Atlantic salmon populations in the Inner Bay of Fundy – used to be around 40,000 – have dropped to less than a hundred in recent years. They have been listed as endangered under the Species at Risk Act since 2003.

The Fundy Salmon Recovery project aims to save them from extinction and regrow their population. The marine conservation farm affiliated with the project was founded in 2014 in Dark Harbour, Grand Manan Island, New Brunswick and is operated by Cooke Aquaculture Inc.

Cooke supplied and installed the custom farm and we are the daily caretakers of the wild salmon through feed and nutrition, health monitoring and equipment maintenance.

Biologists from the Fundy Salmon Recovery Project collect juvenile wild Atlantic salmon from their native rivers of Fundy National Park and the Petitcodiac watershed and transport them to Dark Harbour, where they are raised in the ocean on the conservation farm until they are mature adults.

Trained Cooke Aquaculture staff use their knowledge and technology to ensure appropriate feed is used at the right time, that fish transfers back to the wild are conducted with as little stress as possible for the fish, and onsite farm infrastructure provides the appropriate care until the wild salmon are ready to be released back to their native rivers.

Once mature, the adult salmon are then transported back to their home rivers to spawn naturally. The hope is that once these salmon spawn, they will travel back out to sea to feed and return again one year later to continue the cycle. Atlantic salmon can do this migration and spawn two or even three times in their lifetime.

We are seeing high numbers of salmon returns in the rivers at Fundy National Park through the program. By returning salmon at the adult stage, their offspring are spawned and hatched naturally in the wild which allows them to avoid compromises to wild fitness of being produced in captivity.

Advances in ocean aquaculture technology and science have allowed us to reduce the many unknowns around marine mortality for this important species. We are very pleased to be using our fish farming innovations to be a key contributor to the increasing numbers of wild salmon returns.

Fort Folly Habitat Recovery, a partner since 2014, leads the Atlantic salmon conservation and recovery efforts on the Petitcodiac river system, which historically produced 20 percent of the overall inner-bay population.

“One river isn’t going to restore a population, but the more rivers that we can return adult salmon back to, the more chance that there’s going to be larger smolt runs resulting from that in subsequent years. The more smolt going out to sea, the better chance that more are going to survive to return again,” explained Robinson.

He adds that Fundy National Park has been seeing increasing returns throughout the year and estimates this year they could see their highest number of returns in decades. Petitcodiac, a younger sister project to that in Fundy National Park, has now counted 30 adult salmon returns in 2021, compared to a few years ago where it was void of any inner bay Atlantic salmon.

“The overall growth and success of the Fundy Salmon Recovery collaboration has been extremely exciting,” said Robinson. “This is something that none of us could have ever dreamed of being able to do on our own, and the way that we work with one another and complement each other’s efforts all for a common objective is really the best thing about the whole project.”