How green is your shellfish? 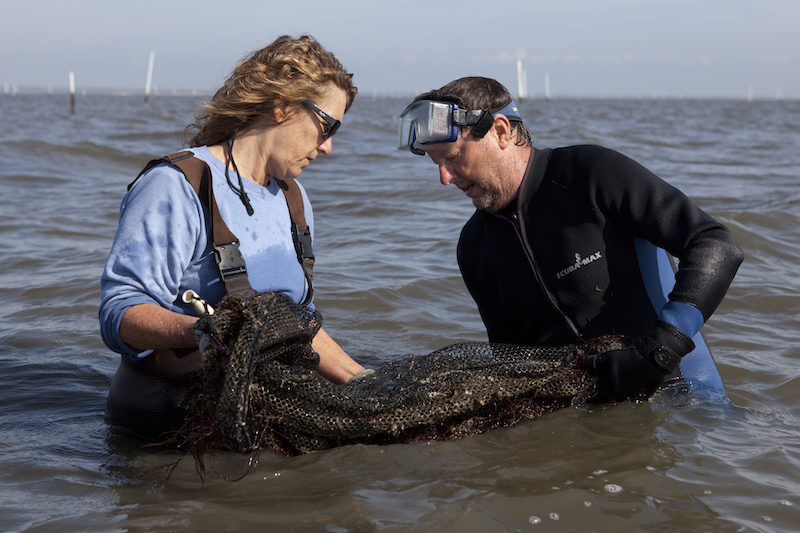 By nature shellfish are the filters of the sea and, more importantly, they remove nitrogen from coastal and estuary waters where human runoff and septic system leeching leads to spiking nitrogen levels that cause environmental damage. But there are additional efforts in the US to make the harvesting and other production processes “greener,” as well as further improving the environmental performance of the industry.

Recently University of Florida shellfish biologists released their report on the environmental value of shellfish aquaculture in the state and more specifically the Florida hard clam farming sector.

“As part of this project, we decided to create a Farm Benefits Calculator that an individual could use to make a simple estimation of the potential benefits their farms provide based on their annual production,”  Leslie Sturmer, the Regional Shellfish Aquaculture Extension Agent, at the University of Florida Extension of the Florida Sea Grant, told Aquaculture North America. “That calculator is up now on my website.” (http://shellfish.ifas.ufl.edu/farm-benefits-calculator/)

The report, “Green” Clams: Estimating the Value of Environmental Benefits (Ecosystems Services) Generated by the Hard Clam Industry in Florida, looked at how shellfish (oysters, clams, mussels, etc.) provide a favorable environment for the coastal and estuarine waters in which they are grown.

“In turn, shellfish farming can provide local communities with a variety of ecosystem services, whose value can be quantified,” wrote authors of the report, including Sturmer.

Measurements, particularly for harvest-sized clams at water temperatures found in Florida, are not available through the literature, according to the report. To address these information gaps, pertinent laboratory measures were followed by UF shellfish biologists during the study.

Bivalve shellfish, like clams, oysters, and quahogs, provide these same kind of ecosystem services in coastal waters currently overburdened by high nitrogen levels caused by runoff from lawns and residential septic systems due, in part, to over development in coastal communities.

Coastal water bodies and estuaries are essential habitat for many species and are also important to the economic health of coastal economies. While nitrogen is a vital nutrient to the marine environment, in excess it causes eutrophication or an increase in the rate of supply of organic matter to a system. Eutrophication can lead to a series of negative consequences and thus nitrogen can be a root cause of habitat degradation, according to researchers.

UF research is just the latest of several Sea Grant projects up and down the eastern US coast looking at several shellfish species as possible eutrophication mitigators.

Reducing nitrogen to thresholds identified to maintain ecosystem health is an approach being examined throughout coastal Massachusetts, for instance.

The propagation of shellfish is one strategy, along with others, that is currently being considered as a method to reduce nitrogen in coastal waters, according to Massachusetts researchers. Bivalve shellfish live in coastal water bodies and derive their nutrition by filter feeding on available algae or phytoplankton in the water column.

Shellfish do not absorb nitrogen directly from their environment but act as a first order consumer as they graze on phytoplankton (primary producer). The microscopic plant life shellfish feed upon assimilate dissolved nitrogen available directly from the surrounding waters, which can be transferred to the shellfish following consumption and digestion.

As the shellfish graze and grow they incorporate an increasing amount of nitrogen from the local waters into their tissues. Overall, the filter feeding activity of shellfish affects the marine nitrogen cycle through incorporation of nitrogen in shellfish tissues and the cycling of nitrogen through the particulate waste (feces and pseudofeces), collectively called biodeposits, according to similar studies done in Massachusetts.

The greener the better

“The shellfish aquaculture industry is moving beyond just touting that their farmed product is “green” and sustainable but are also quantifying and assessing the value of ecosystem services provided by clams, oysters, etc.,” wrote Sturmer in an email.

That said, there have even been efforts to make the harvesting of shellfish less impactful on the environment. In Florida and Virginia–the largest oyster producer in the country–there have been several projects looking at alternative harvesting methods to the mechanical dredging traditionally used by fishermen to bring their product up from the bottom.

“Our growers use a different method of culturing clams – in bottom bags, Sturmer explained.” These culture units contain the clams and thus become the harvesting device…no need for mechanical harvesting on shellfish leases.”

Her agency which regulates the state’s industry and administers the state leasing program has included a special lease provision limiting the use of mechanical harvesters on aquaculture leases.

With a Department of Agriculture and Consumer Services (DACS) grant, UF researchers evaluated the pump-driven harvester to determine effects of its use on soil and water quality, in particular turbidity. The intent was to provide the science to the agency to affect change.

“After the study the DACS general counsel decided that it would require legislative change,” Sturmer explained. “A bill was drafted and sponsored in the 2015 legislation session. But, this was a disruptive session this year, with our [state representatives] all up in arms about Medicaid and Obamacare… nothing could really get through except passing the budget. So we are still in a holding pattern!”