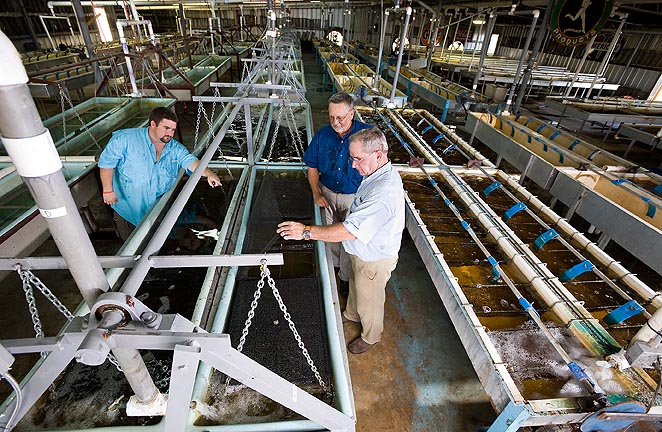 Researchers in the US have developed a new incubation technique for channel catfish eggs.

Researchers in the United States have developed a new incubation technique for channel catfish eggs using a process that moves increased amounts of oxygen-rich water through spawning troughs.

“I primarily do research on production pond water quality but around 2005 I began a project looking at catfish egg oxygen transfer and oxygen metabolism,” Torrans tells Hatchery International. “That work… got me thinking about improved management practices other than just increasing the dissolved oxygen (DO) in hatchery troughs, specifically better ways of moving oxygen-rich water through the spawns, and the idea of the ‘see-saw’ was born.”

The “Seesaw,” is a vertical lift incubator that moves the egg masses in and out of the water. The “Seesaw” was designed to improve water movement through the center of the egg mass and circulation around individual spawns.          Furthermore, Torrans believes that the eggs consume atmospheric oxygen while out of the water, thus reducing demand for oxygen in the water.

Incubators for hatching channel catfish (Ictalurus punctatus ) eggs have used a design that’s remained nearly unchanged for the past 80 years. Incubators typically consist of paired metal troughs with multiple paddles rotating on a metal shaft above each trough, according to Torrans’ research paper provided to Hatchery International.

Depending on the size of the trough, typically 7 to 9 kg of eggs are incubated per trough. Egg masses incubated at 26°C hatch in six days and are transferred to fry-rearing tanks before being stocked in ponds.

The main factor limiting hatch rate appears to be the dissolved oxygen (DO) concentration around developing embryos, according to Torrans’ research. Low DO concentration not only increases mortality, but also can lead to premature hatching.  Oxygen demand increases as the number of eggs stocked in a trough increases, limiting the amount of eggs that can be placed in a trough.

Torrans suggests that increasing water flow can raise the amount of oxygen supplied, but may not always be practical owing to logistical and economic constraints within the hatchery.

A higher DO concentration can be achieved with the addition of liquid oxygen or atmospheric air, either by aerating the main water supply or through air-stones in individual troughs. However, as the mass of spawns in a hatching trough increases, water circulation around and through individual egg masses is reduced, decreasing the amount of oxygen to the center of each egg mass, causing death of embryos in the center. This may lead to subsequent fungal or bacterial infections affecting the remainder of the egg mass.

Torrans believed there had to be better way. Beginning in 2008, he began an effort to develop a device that would bring better water movement, and more DO to the catfish egg sacks.

His team designed the “Seesaw” to improve water movement through the center of the egg mass and circulation around individual spawns. Furthermore, Torrans believed that the eggs consume atmospheric oxygen while out of the water, thus reducing demand for oxygen in the water. Compared to a standard hatching trough, the Seesaw increased fry production and decreased the amount of water used per fry produced.

“We designed this study to compare the ability of the ‘See-Saw’ and traditional hatching troughs to produce catfish fry at an egg density higher than recommended levels,” he wrote in his research paper titled “Effect of Increased Egg Stocking Density in Existing and Experimental Catfish Incubators.”

To quantify the effects of high loading rates we measured hatch rate, survival to swim-up, and selected water quality variables (temp, DO, flow, pH, TAN, and NO2 -N) for both incubator types. These measurements provide an assessment of potential advantages that the Seesaw may possess over standard hatching troughs.

The movement of the incubator is similar to that of a beam balance (or seesaw) in that a horizontal bar pivoted in the middle lifts the rack (containing three baskets) in one trough up and out of the water while the rack in the adjacent trough is lowered into the water.

According to the researchers, the Seesaw’s incubating movement of pulling and pushing the spawns through the water provided better aeration to the center of spawns and prevented spawns from suffocating one another when loaded at high densities. Even at high densities, spawns in the Seesaw separated and repositioned in the basket with each up and down stroke, likely preventing any space- and density-generated aeration problems.

Moreover, it is plausible that the eggs were absorbing oxygen directly from the atmosphere while they were in the air, effectively reducing the demand for oxygen placed on the water. Finally, the action of raising the racks out of and then splashing back into the water accounted for an increase in water aeration. A combination of all these mechanisms accounted for the Seesaw’s ability to successfully incubate an increased number of eggs using the same area and water volume as traditional paddlewheel incubators.

“The seesaw saves space, water and labor,” Torrans added. “It can be loaded with three-times as many eggs (45 lbs/trough) while using less than 50% as much water (only 2 gpm/trough). Unlike the old incubator in which the eggs are typically turned by hand several times a day, eggs in the Seesaw don’t have to be handled after they are loaded in the baskets.”