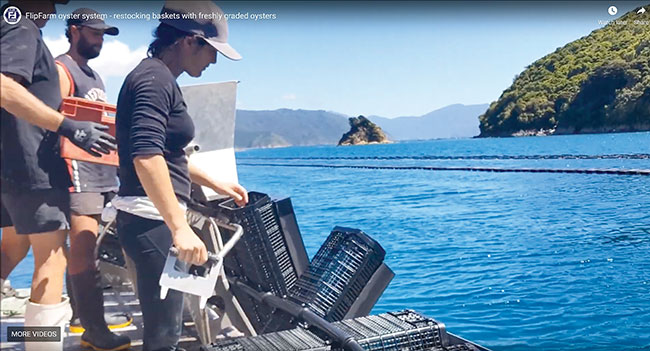 Oyster farming can be a labor-intensive task but an award-winning innovation from New Zealand eases the backbreaking aspect Photo: Flipfarm/Youtube

A semi-automated method for flipping oyster-growing cages has won the top prize at the 9th Annual Global Aquaculture Innovation Award given by the Global Seafood Alliance .

Called FlipFarm Systems, the technology developed by New Zealand company FlipFarm features Hexcyl Pro oyster cages attached to a conveyor belt that transports the cages toward the side of a harvesting vessel to be manually flipped one at a time with just a slight push.

Growers have traditionally flipped cages manually – some as heavy as 200 to 300 pounds when the oysters are near harvest. Flipping exposes all sides of the cage to the sun and kills the parasites that have attached themselves to it.

The system is adaptable to diverse growing environments and is now used by more than 70 farmers in 12 countries worldwide, said the company.

The finalists were selected from a pool of 39 applicants from 24 countries. The winner was selected by the participants at GSA’s.