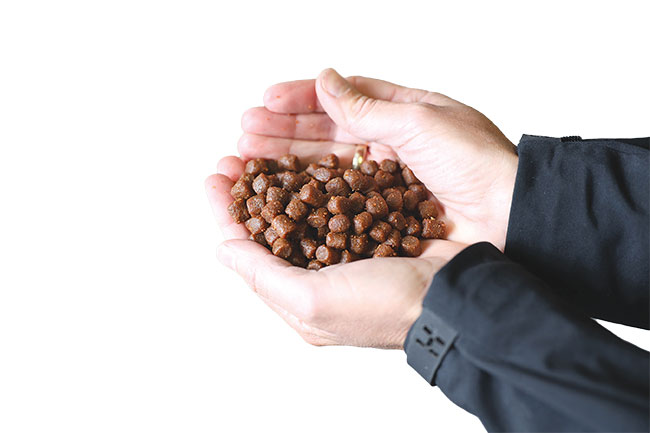 Fish feed comprising black soldier fly protein from Cargill and InnovaFeed. A landmark deal between the two nutrition giants in 2019 signals the viability of insects as protein source for fish feed Photo: Cargill

Flush with funding from a recent €50M ($55M) round of venture capital, CEO Kees Aarts of the insect producer Protix is issuing a “shout-out” for new partners in the US and Canada, as the Dutch company pursues international expansion to meet rapidly rising demand for its novel aquafeed ingredient.

This comes at a time when an increasing number of insect protein startups are boosting production of this alternative to forage fish and soy that will help aquaculture become both bigger and greener.  Along with Protix, companies like Canada’s Enterra, French-based Ynsect and InnovaFeed, and Entocycle in the UK are building giant high-tech facilities, with acquisitions and cross-border partnerships also part of the landscape.

On the other end of the spectrum, startups are multiplying.  As of February, the estimate of insect producers worldwide stood at 310, according to BugBurger, a Swedish publication that covers insects as food.

“And it’s an industry that didn’t exist 12 years ago,” Aarts points out.

But in the background, climate emergencies and the war in Ukraine are heightening the urgency of finding alternative proteins. With Ukraine ranked eighth just behind Canada in global soybean production, this core commodity has been destabilized.  Similarly, small pelagic fish are at risk, as marine heatwaves diminish their abundance, size, and quality. More storms could also limit fishing, say researchers in a March article in PLOS Climate.

So, while insect producers are scaling, some industry watchers ask: Will it be fast enough? How can roadblocks be removed?

“Aquaculture producers and the feed mills need a lot of convincing to introduce new raw materials.  They are very conservative.  Change happens really slowly,” says Birgir Smarason, a research expert in sustainability and aquaculture in Iceland who is serving as project manager for NextGen Proteins, a four-year European Union project dedicated to accelerating production of proteins from microalgae, single cells, and insects. 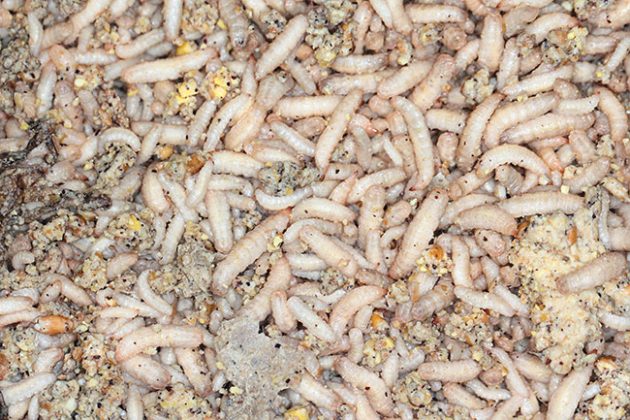 The case for insect proteins
For the past 20 years, scientists have investigated the nutritional value of insect meals for fish, with promising results. One drawback, however, is that work has tended to focus on juvenile stages.  But dose response trials NextGen Proteins completed in November – with “very good performance for both 7- and 14-percent inclusion levels of insects,” says Smarason – have already progressed to large-scale tests where salmon will be grown from an estimated two to four kilograms. Mowi, a participant in the project, is conducting these ocean trials in Scotland.

With commitments to sustainability like this, Mowi is among the leaders who see the case for insect protein as compelling.  Farming insects – whether black soldier flies, mealworms, or crickets – is more scalable than forage fish capture and more climate-friendly than soy production, which has a high carbon footprint related to land-use change.  Insect farming facilities have low carbon emissions and low energy use, with little to no reliance on land or freshwater.

But the key appeal of insect protein, says Laura Krishfield of Boston-based Lux Research, is its circularity: low-value agricultural by-products and food waste are naturally converted to high-value ingredients to nourish the fish that people eat.  And eliminating rotting food in landfills cuts emission of methane, which is more than 25 times as potent as carbon dioxide at trapping heat in the atmosphere.

Another benefit: Some insect producers are locating their commercial-scale farms close to the sources on which they rear insects – breweries or corn processing plants, for example. This shortens the supply chain. InnovaFeed, which already has two plants in France, is co-locating a third in ADM’s massive Illinois complex, where black soldier flies will be reared on corn processing waste. And, to close the loop, the company has a deal to sell the insect protein back to ADM’s pet foods division.

As this partnership suggests, environmental impact – the effect on global warming, energy use, and land use – is multi-faceted. Some assessments also factor in what resources are tapped to feed insects and how they are converted.  One analysis by Dutch researchers in 2019 found “residual” waste or manure most favorable, followed by co-products or former foodstuffs, then products like sorghum or cowpeas that can be consumed by humans.   “Our results show that the environmental impact indeed largely depends on the type of resources used,” they concluded.

The study also found that fishmeal scored better than insects in all areas but one.  “But the reality is that changing from fishmeal to soy was never a story about sustainability. It was a story about supply,” says Brett Glencross, the technical director of IFFO, the marine ingredients organization. 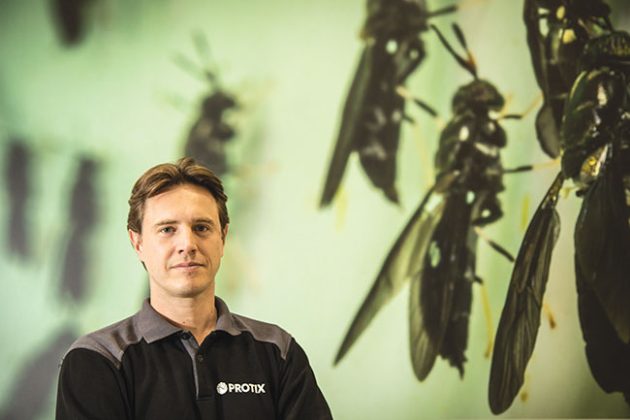 Kees Aarts, founder and CEO of Dutch company Protix says convincing governments about the safety and ecological and economic impact of insect-derived proteins were among the initial hurdles he faced

Regulatory roadblocks
Using manure as a rearing resource raises the issue of regulations.  Currently, the EU prohibits it, along with catering waste. “The diversification of the inputs authorized as insect substrates is seen as a catalyst in upscaling insect farming,” says The International Platform of Insects for Food and Feed (IPIFF).

But regulations are changing. Just last August, the EU approved use of insect protein in poultry and pig feed.  (Aquafeed authorization came in 2017.) Change like this brings new markets and accelerates the economic rationale to scale up.

When Kees Aarts founded Protix in 2009, he says he had five legal barriers.  “But to build an industry, if you have to spend some five to six years plowing through bureaucracy, getting governments convinced that there is an ecological and economic impact and that products are safe, then that’s OK.”  In fact, in 2013, he wrote an industry roadmap “Food Safety First – First Time Right” that set forth, step-by-step, “releases of markets and feedstocks for circular nutrition based on insects.” That blueprint has been adopted by associations worldwide. 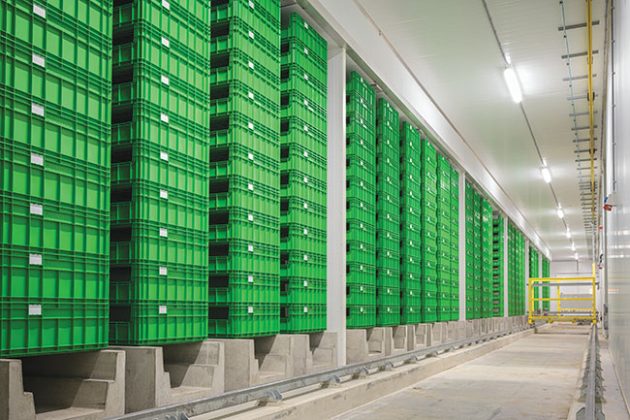 Protix’s vertical farm produces over 10,000 tons of protein per hectare annually. In contrast,
a hectare of soy yields only 1 ton annually
Photos: Protix

Optimized production
Central to Aarts’ vision was an operation optimized through automation and digitization. Protix now holds over 20 patents across breeding, rearing, and processing – which occur in one facility. “It’s like having the seed company, the farmer, the miller, and the packaging company all under one roof,” says Elselina Battenberg, head of communications.

And the efficiency of the black soldier fly (Hermetia illucens) itself creates massive climate benefits.  Protix’s vertical farm produces over 10,000 tons of protein per hectare annually.  In contrast, a hectare of soy yields only 1 ton annually.

Currently, a large percentage of Protix’s insect-based products go to pet food, but feed for fish and poultry are other markets. One such manufacturer is Nutreco’s Skretting, the world’s largest aquafeed producer.

Nutreco, in fact, has a goal to use five to 10 percent novel ingredients in its feed by December 2025, according to its corporate sustainability director Jose Villalon.

That challenge is compounded by costs that are high compared to soy.

Yet Villalon is positive.  Scaling up to achieve more efficient production and changing legislation to permit feed inputs consistent with a circular economy will bring down emissions and costs, he says.

But the deficit in availability? “I feel comfortable because I know for a fact that the world will be a different place in two years or three years,” he says. “You cannot do a five-year strategy thinking in today’s terms.”