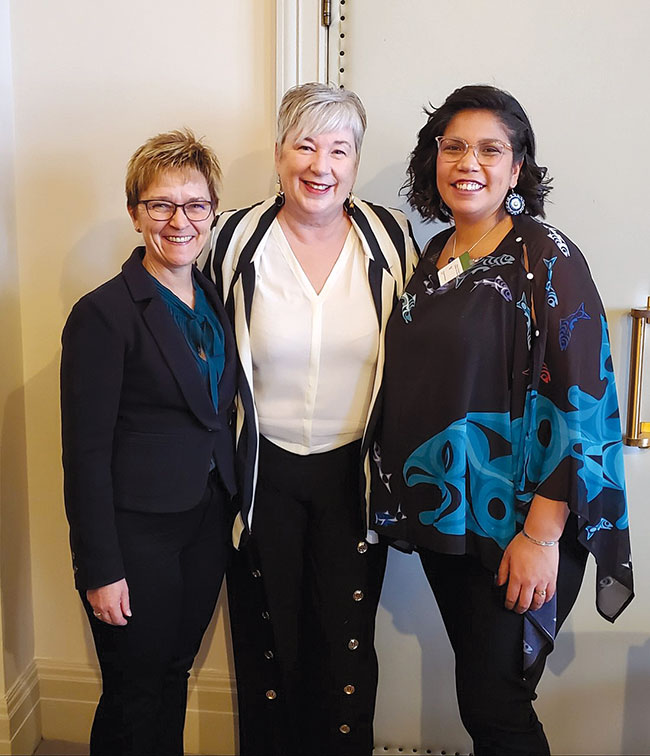 The setting was a nondescript conference room at the Courtyard Marriott in suburban Connecticut. The PowerPoint presentations, lively coffee breaks, and inevitable problems running video were typical of many conferences. What was striking at the Milford Aquaculture Seminar last January, however, was that 42 percent of the registrants were women.

Women play many roles in aquaculture. They run family farms, negotiate with regulators, lead research teams, and staff corporate jobs. And while they come from different backgrounds—science, business, and international relations, among them—they share a common passion about aquaculture, though that manifests in different ways.

NOAA Science Communications Specialist Kristen Jabanoski likes the optimism that surrounds shellfish aquaculture. “It’s a win-win for people and the environment,” she says.

Julie Trommater, who oversees the highly automated algae lab at Maryland’s Horn Point Laboratory, says, “I know it’s been a good day when I leave covered in mud.”

One quality many women in aquaculture share: they are not shrinking from challenges. Aquaculture North America (ANA) spoke with three leaders who are using science, new ideas, and partnerships to address some of the toughest ones.

When Dr Diane Morrison was growing up in Scarborough, Ontario, kids played outside from dawn to dusk. But her mother never worried about her daughter’s whereabouts because she could always hear the little girl’s voice, from the middle of a group, calling out ideas of what game to play next.

Upon that innate leadership talent, Morrison built strong skills as she trained as a veterinarian. She learned how to take a wide view, ask a lot of questions, distill information, and then formulate a decision to communicate with authority to the pet owner or farmer she was helping.

Those skills have stood her in good stead as the managing director of Mowi Canada West, responsible for a salmon farming operation of 600 people. Today, she is as likely to be joining First Nation partners for a meeting with Parliament as sitting in jeans leading employees in an exercise about what salmon farming means to them.

At Mowi Canada West, women occupy positions at all levels across operations. At the center of it all, they manage brood stock production, processing plant operations, and remote grow-out sites. But their impact is felt in many ways. For example, for purchasing systems, Samatha (Sam) Tomkinson initiated the addition of eco-friendly products for offices and sea sites.

Says Morrison, “There are so many different avenues. For someone motivated and curious, it’s so wide open.” 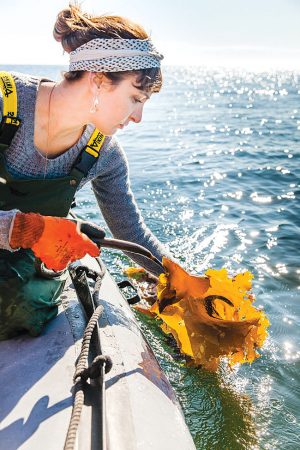 Briana Warner has capitalized on her international relations and economic development experience to grow a seaweed venture in Maine
Credit: Atlantic Sea Farms

“Delicious” is a word you hear a lot in a conversation with Briana Warner.

When she became chief executive of Atlantic Sea Farms in August 2018, she vaulted forward, quickly taking the Saco, Maine, company in new directions. She multiplied the number of kelp farm suppliers by a factor of eight, ramped up production in the 8,000-foot facility, and developed an array of new products.

One of those, Sea-Chi, a fermented kimchi which recently won a Good Food Award for taste, compelled a New York Times food writer and a friend to finish an entire jar in one sitting. In March, the farm-to-table fastfood chain Sweetgreen sourced kelp from Atlantic Sea Farms to play a starring role in a “Tingly Sweet Potato + Kelp Bowl” created by chef David Chang.

That’s “delicious” in action. Warner’s strategies are also smart. Atlantic Sea Farms guarantees to purchase every blade of kelp grown by the network’s farmers, who tend to be fishermen keen on diversifying their income as waters in the Gulf of Maine warm.

That social mission is what motivates this diplomat-turned-entrepreneur, who worked for the US Department of State for six years and later served as economic development director at the Island Institute, a Maine nonprofit.

“Our goal is to help diversify Maine’s coastal economy in the face of climate change. Everything we do is driven toward that goal,” she says.

Trained in marine biology and geoengineering, Valerie Robitaille saw a problem: shrimp hatcheries were counting larvae by hand. She explored how optics and photonics could help, and driven by that idea, she became a technology entrepreneur.

Co-founded in 2009, Quebec-based XpertSea has today deployed its data platform in more than 400 facilities in 40 countries. Last year in Edinburgh, it won the Aquaculture Award for Technical Innovation.

Robitaille says her creativity comes from her grandmother, who was an artist. But running a company of 50 people has also required perseverance. “It hasn’t always been an easy road,” she says. She attributes her resilience to her mother, who at age 35 left her job as a bank cashier and went back to school to study engineering.

Humility is another of Robitaille’s traits—and this one appears to be genuinely her own. When she describes the culture of caring and respect at XpertSea, she uses “we” to share credit with her three co-founders.

To grow operations, she marshals new team members to work locally, largely in Southeast Asia and South America. The platform they bring to farmers uses artificial intelligence and computer vision to help them save time and make better decisions.

“Around the world, people have dedicated their lives to fish production, but they don’t have enough information,” she says. “We are giving them visibility.”