From pulling fish lines, to working in laboratories, women are making a noticeable impact in aquaculture, but are their benefits equal to their male counterparts? 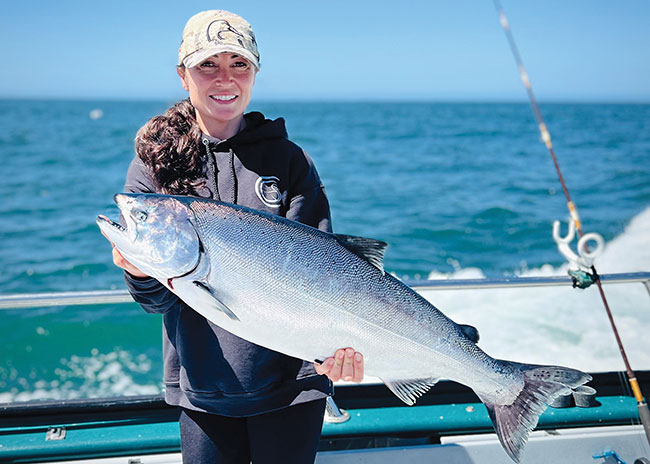 Louisiana Department of Fish and Wildlife Fisheries offers an overview:

Employees are required to use their accrued sick and annual leave so that they are paid. To qualify for FMLA, an employee has to be employed for at least 12 months and have worked 1,250 hours or more during that time. Employees who do not meet this criteria, qualify for Maternity Leave.

Maternity Leave provides up to six weeks of unpaid maternity leave for employees who do not meet the criteria for FMLA leave. Employees are required to use their accrued sick and annual leave so that they are paid. Also, under this law, employees can take up to four months off if there is a disabling pregnancy. This covers those who run out of FMLA leave as well.

Bourque said there are other benefits. “Under federal law, we are required to provide reasonable break times for an employee to express breast milk for up to one year after the birth of the baby and to have a dedicated, private, and secure place for the mother to do so,” she said. “The only other benefit that I can think of is insurance companies are mandated by federal law to waive co-pays or co-insurance for annual wellness visits. This is the same as for men though, so not sure if that counts.”

Sandra E. Shumway, PhD at the Department of Marine Science at the University of Connecticut, admits she didn’t grow up around aquaculture, but because of summers on the water in Rhode Island and science fair projects that carried through high school, a decision to go into marine science was pretty much a given.

“I don’t think anyone was surprised, the challenge in 1970 was finding the right school – or any school,” she said. “I enrolled at the fairly new campus of Long Island University, Southampton College, which was at the time the only school that offered a degree in marine science.  I went from there to the University College of North Wales as a Marshall Scholar to do a PhD.”

She focused on environmental physiology of marine invertebrates and used lots of molluscs as test organisms.  From there, she spent a couple of years in New Zealand – more molluscs (and lots of other invertebrates). At the Maine Department of Marine Resources, Shumway joined forces with a small group who were just getting shellfish aquaculture off the ground. 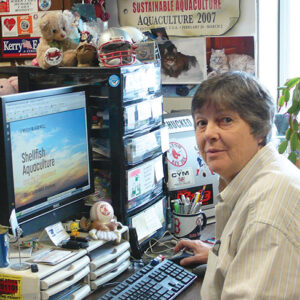 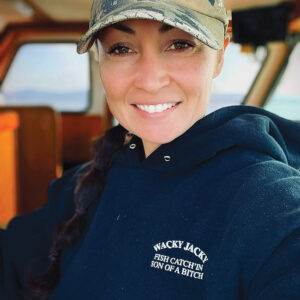 Mellynda Dodds, a captain of a sport fishing boat in San Francisco Bay, says her job is hard work with long hours but she loves it. Photo: Bryan Collier

“I was able to switch some of my research focus to questions of direct application to the industry issues and I have never looked back,” she said. “While I have pursued what many would label ‘basic science’ over my entire career, I have been fortunate to work with shellfish culturists globally on issues related to feeding, siting, biofouling, harmful algal blooms, and public outreach.”

When asked if women were available for advice, Shumway didn’t hesitate:

“Not really, but does it matter? I have always been a strong believer in the best person for the job. As a guy told me decades ago: ‘Shellfish work was hard and dirty and most women chose not to pursue it.’ I never had a sense that they were intentionally excluded.”

There are more women going into marine-related field and aquaculture today than a couple of years ago.

“When I taught undergraduates at Southampton College, we were always cognizant of the fact that more than half of the students were women,” she said. “I think the field has been welcoming and open and there are many successful women working in aquaculture internationally.”

Melynda Dodds is a fulltime captain of the “Flying A”, a sport fishing charter boat at San Francisco’s Fisherman’s Wharf. She’s been in the industry for six seasons, starting as a ‘pinhead’ deckhand.

“When I was a little girl, my stepdad taught me how to catch small freshwater fish,” she said. “When I moved to the Bay Area, I fell in love with chasing king salmon. That led to a curiosity in the charter boats and how they work and operate. Once my kids both started school, I was able to work again and pursue a new career.”

Everyone said she was crazy. Training was unpaid on the job from a senior deckhand.

There was an amazing woman who owned her own operation and captained her own boat for about 40 years. She was an incredible force who was a silent mentor to Dodds. The limited interaction was surface level but always very encouraging.

Dodds is adamant in her answer about more women going into aquaculture today than a couple of years ago.

“The answer is no,” she said. “It is a tough sell – hard work with little pay, no benefits, and the Wild West cast of characters. I would like to label these characters as a group of guys that are as passionate about the fishing as I am. They have various experiences and many live, eat and breathe fishing.”

Dodds said prejudice does exist against women in her field.  There are also old timers that aren’t pleased that she is a woman and do not treat her with respect. They see that gender does not play a role in being a great captain, it’s the hard work and dedication. Sick leave and maternity leave are not available for women; but it isn’t available for men either. Most are contract workers than employees: 1099 vs. W-2.

“It’s hard for me to convey the opportunities, struggles, and characters that create this environment. There are long hours, danger, bad weather but there is a way for women to make a living in aquaculture,” Dodds said. “Be tough – you are tougher than you think – and pick a good mentor.”

“Moreover, I don’t advertise often that I’m a female in the industry because I want people to take me seriously. I want people to go fishing for the sake of fishing, not to be deterred by a female captain or deckhand.” said Dodds.