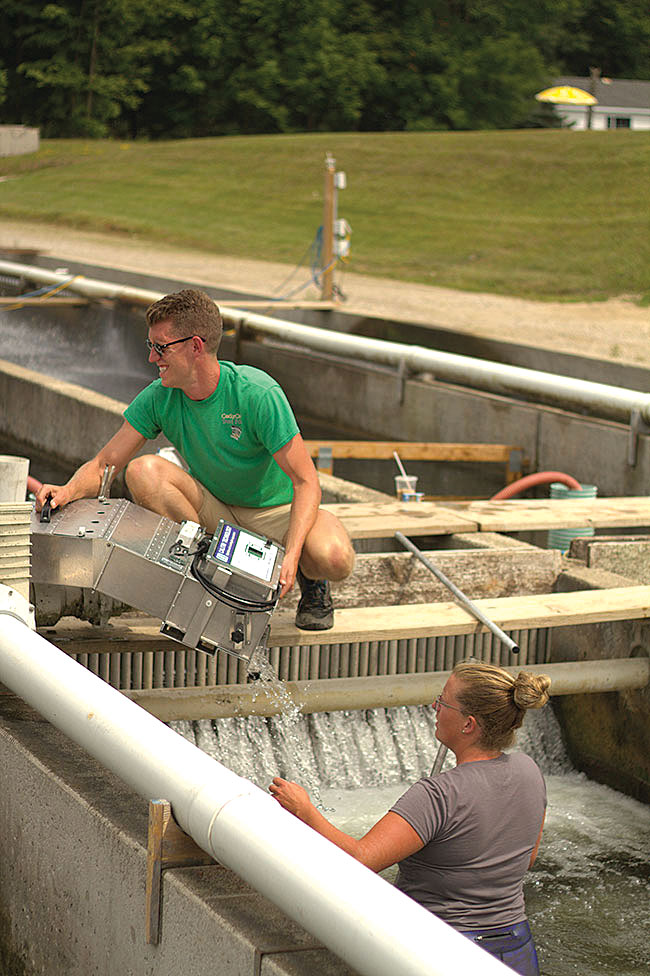 Siblings RJ and Arlen Taylor of Ontario’s Cedar Crest Trout Farms have modernized the farm and are challenging old norms, including regulations

Regulations and fish health are troubling US and Canadian trout farmers, as Iran and Turkey have grabbed the top spots in world production. To grow, many in North America contend they must change stubborn mindsets—both among consumers and farmers themselves.

Yet others are focused on a brighter future delivered by science.

Trout sales in the US totaled $100 million in 2018, according to the National Agricultural Statistics Service (NASS). That represented a decrease of 10 percent from 2017 and an increase of only 4 percent from five years prior. For almost 20 years, Idaho has accounted for two-thirds of US production, on average.

One explanation for the flat production in the US is that the number of trout farms in Idaho has tumbled 27 percent between 1998 and 2013, according to the Census of Aquaculture.

The financial impact of regulations, aging farmers with no succession plans, and overall costs are behind this, according to Jeremy Liley, president of the US Trout Farmers Association (USTFA). “Little farmers have been pushed out by regulations and importers with lower prices,” he adds.

Regulations
To explain the weight of regulations, Gary Fornshell, a University of Idaho extension educator, points to a national survey conducted among trout and salmon farmers in 17 US states. (The US Trout Farmers Association contributed some funding.)

The study, co-authored by Carole Engle, Jonathan van Senten, and Fornshell, found that regulatory costs averaged $150,506 annually, hitting smaller farms the hardest. The greatest costs are related to effluent discharges, which Liley says are “ever-changing and ever-more-stringent, but don’t appear often to be based on any scientific evidence.”

Imports
Demand for trout is growing, but Americans import half as much as they produce, according to data from NASS and NOAA. Norway, Chile, the UK, Columbia, and Canada lead those imports.

Sean Nepper, a National Aquaculture Association board member and Riverence’s director of production, explains the dynamic: “Some other countries—where the cost of business is less and they’re not always held to the same regulations as the US—bring the fish into market at a cheaper price. It really makes smaller farmers struggle. I think there will continue to be consolidation of farms in the US to get the kind of mass needed to compete with those prices.”

“I think that our biggest challenge is getting the American and the Canadian public to understand what aquaculture is and what it isn’t…not just being tolerant of farm-raised fish in the marketplace, but actively choosing it,” says Jesse Trushenski, director of animal health and welfare at Riverence.

Will people invest the time to understand the science behind aquaculture? Will they pay more for trout locally grown? “I think it is the responsibility of Riverence and others within the trout and salmon industries to get out there and communicate what it is we do and why.”

University of Idaho extension educator Gary Fornshell holding a dip net during a harvest of cutthroat trout that was part of a feed demonstration trial in Idaho. Farmers strive for high-quality feeds that are still affordable Credit: University of Idaho Extension

Canada
Arlen Taylor does speak out. She and her brother RJ serve on the board of the Ontario Aquaculture Association and own Cedar Crest Trout Farms in Hanover, Ontario, which their father started in 1969.

“Canada has a well-established trout market that we can’t even keep saturated,” she says. In fact, Canadian production of trout increased 50 percent in the five-year period between 2012 and 2017, with Ontario accounting for over 60 percent of that volume, according to Fisheries and Oceans Canada (DFO). Overall dollar value in Canada grew 69 percent during that five-year period.

“In general, in Canada, we’ve been very innovative, modernizing and mechanizing our operations.  But we aren’t innovative in our mindsets: our sales, pricing, collaboration, and production models.”

She also inveighs against regulators. For example, she is calling for the approval of alternative products that farmers view as less harmful, adding, “It’s a really fast-changing environment, and we have a regulatory body that takes 10 years to make up its mind.” Many agree that a new Federal Aquaculture Act will help, but its approval is not expected until 2022.

Fish mortality
Another sobering statistic in the NASS data is this: from 2013 to 2018, mortality due to disease increased from 5 to 12 percent of total volume (pounds) intended for sale. In terms of the number of individual fish, the loss rose from 24 to 34 percent.

A combination of factors is likely behind the increase, says Dr Ken Cain, associate director, Aquaculture Research Institute at the University of Idaho.

Growers often try to maintain the same level of production to meet market demand, even though spring water availability for flow-through systems has decreased in recent years. Some have also shifted to production of larger fish, which can be challenging. “It’s just a simple relationship that, as your environment gets poorer, your risk of and susceptibility to a disease or pathogen infection increases.”

And, when fish are moved from one facility to another, pathogens can spread. “It makes it more difficult to maintain strict biosecurity programs,” says Cain. It is likely such transfers have increased the incidence of copepod parasites such as Salmincola in Idaho.

Driving home the economic pressure on farmers, Cain notes that, “in some cases, companies may try to save money and use lower quality feeds.” This can make fish more vulnerable to infection and disease, especially when they are young.

Plus, when bacterial diseases do occur, companies are less inclined to resort to antibiotics, aligning with FDA guidelines for judicious use of such drugs and, in some areas, consumer pressure.

“We don’t use antibiotics preventatively, only when it’s a life-threatening situation and prescribed by a veterinarian,” says Gabe Watkins, communications director for Riverence. “But for the most part, we work very hard to make sure that our fish don’t need antibiotics.”

Managing diseases
Addressing the situation in Canada, Arlen Taylor says, “More important to fish health are our actions to adapt to the environment.  It’s vastly different now, and with that are coming mutations among bacterial pathogens and parasites, and higher loading of them.  And our treatments are becoming less effective.”

Growers all stress the importance of observing fish behavior to manage disease. New digital tools are emerging to help monitor fish activity and identify potential problems early, according to Fact.MR Market Research, but right now much of this innovation may only be within the financial reach of large global players.

“A lot of it comes down to having very experienced farm managers who, by driving past a raceway and just glancing, know what normal looks like,” says Trushenski of Riverence. “But we are exploring other technologies that would help us maybe automate that a little bit more.”

“There’s a lot that goes into managing a disease beyond just knowing what it is,” adds Liley, who owns a farm in Boulder, Colorado. For example, some approved therapeutics carry strict guidelines on when fish can be sold after use. If you need to go to market, you can’t use them, he says, and that increases the complexity of managing an operation.

Outlook
Today, the most troubling trout disease in the US and Canada—“hands down,” says Cain—is bacterial cold water disease (BCWD). The second is probably infectious hematopoietic necrosis (IHN), which is considered “endemic” to southern Idaho.

“Customers are keen to develop more resistant lines,” says Keith Drynan, Troutlodge’s general manager. “This technology lets us gather the information on the genes already present in our broodstock. Our breeding program is based on optimum use of available genetic variation and does not involve genetic modification,” he emphasizes.

USTFA President Liley used some of these eggs for his operation. “We did not have any outbreaks of BCWD in this lot.  I believe any tool that the trout farmer can utilize that reduces mortalities from diseases and reduces the need for antibiotics is great.  Any farm that struggles with BCWD could potentially benefit from these eggs.”

Another new weapon to fight BCWD is coming out of the lab of the Aquaculture Research Institute (ARI) at the University of Idaho. “We are in what I consider the final stages of getting a vaccine to be fully licensed and commercially available, initially in the US and then hopefully from there, in Canada, Chile, and other areas,” says Cain. A key feature of the vaccine is that it is an easily administered as an immersion bath.

“The future is bright,” says Cain, “Companies are paying more attention to detail and there are some new disease-management tools on the horizon.”

Drynan echoes the viewpoint that many factors will lead to future success. “Of course, genetics is only a part of the armory available to growers.  Environmental conditions, husbandry practices, nutrition, and timely application of therapeutics are all essential elements. We’re all for that.”