Kick out that glass ceiling 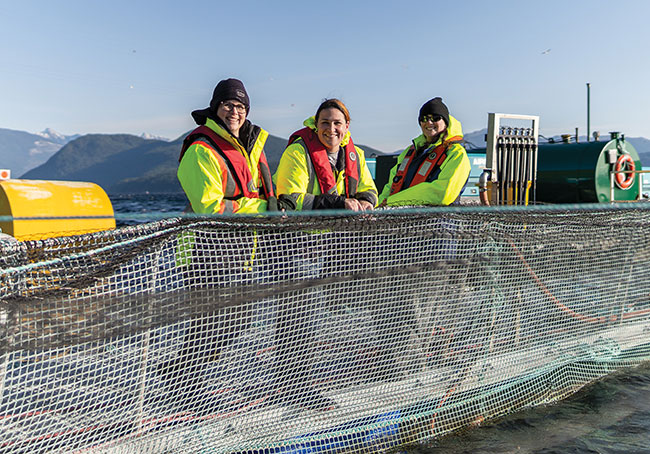 While women have always played a key role in the advancement of Canadian salmon farming, their representation in the industry has historically been just a small slice of the industry’s employment pie.

Today, less than 30 percent of employees in Canadian aquaculture are women, but that number is “rapidly climbing” according to the Canadian Aquaculture Industry Alliance (CAIA).

At the top, however, women are noticeably outnumbered, a trend seen in the rest of the Americas. To change this, many salmon farming companies are implementing policies to create more leadership roles for women. Grieg Seafood, for example, builds female management capacity from the bottom to ensure employees have the criteria for key management positions when they become available.

“Seeing women in leading positions can lead to a change of culture and motivation,” says Kathleen Mathisen, chief human resource officer for Grieg Seafood. “It will also motivate other female employees to seek management positions and see that they also can climb the ladder.”

This dedication to include and advance more women in the industry hasn’t always been the case.

Reflections
Maureen Ritter has been working in the earliest stage of salmon farming and conservation since 1980 in Vancouver Island in British Columbia. She is currently the managing director for Canada Cryogenetics Services and the chair of the BC Centre for Aquatic Health Sciences.

After four decades of working with salmon, Maureen has seen a lot of change in the industry.

“When I first started working with fish, there seemed to be some women in conservation hatcheries and a few in fish farming. We were definitely the minority,” she says. “Women were required to work hard to prove our worth. Generally, we were paid less than the men.”

“In the early 90’s there were a lot of women in management positions in aquaculture, then it swung the other way with less women. It’s great to see more women now in management roles in aquaculture and conservation hatcheries, and I also see strong mentoring within our tribe of ‘women who work with fish.’” 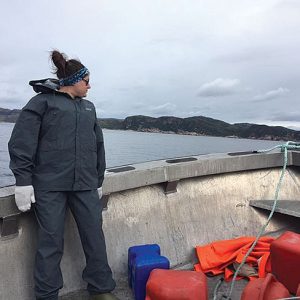 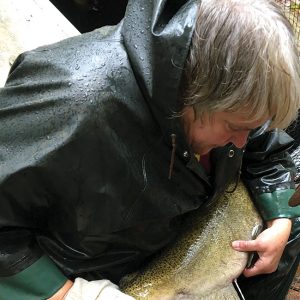 Boys’ club
The challenges of being a woman in salmon farming are similar to any male-dominated industry: being one of the only women on a site or at the table; dealing with workplaces that weren’t designed with women in mind (PPE, washrooms, etc.); being tasked with the “domestic” duties; and having to work harder than men to prove themselves.

There has also been a rise in cyberbullying towards women in salmon farming from critics on social media, which led to the creation of a new Facebook group called Women in Canadian Salmon Farming.

Richelle Reed is a member of that group. She works as a salmon farmer for Kelly Cove Salmon/Cooke Aquaculture in Grand Manan, New Brunswick. Since she began working with fish in 2016, she’s seen some progress, but is clear the industry still has far to go.

“It’s been a ‘boys’ club’ for so long. You get your foot in the door and you always have to be doing your job at a high-performance level,” she says. “When you aren’t selected for more training, or you aren’t asked to help the mechanics, you have that thought in the back of your head, ‘it’s because you’re a girl.’”

“I still hear that voice, and I’ve recognized it will always be with me because of society. My gender has nothing to do with my job performance and I like to see the look on some men’s faces when I can do something better than them and prove them wrong.”

The girls’ gain
Thankfully, the opportunities for women in salmon farming are quickly outpacing the challenges as the industry progresses (technologically and culturally) at an exciting pace.

Today, there are many different and new roles in divisions supporting the sector where women can flourish. Positions within operations, research, seawater, freshwater, marketing and administration offer a wide range of options for women to move into, both laterally and through promotion.

Women seem to be thriving especially in freshwater hatcheries, where in some cases they outnumber men. When asked why that is, Jody Atkinson, Freshwater Biological Controller for Mowi Canada East in New Brunswick, says it’s often a perfect match.

As aspects of salmon farming become more automated and technological, physical strength becomes less of a factor to raising fish, which can be a barrier for some women. Rather than taking away opportunities, automation is providing new ones for women and helping close the gender gap on farms. 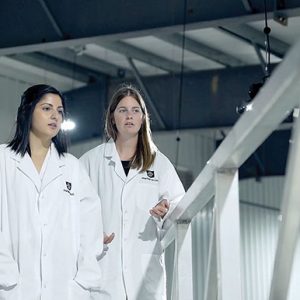 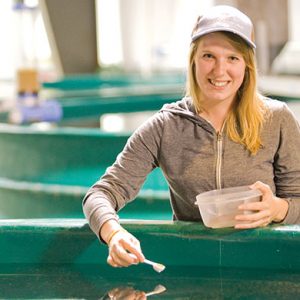 The future is female
With how things are heading in Canadian salmon farming, it looks like young, educated women will be massive players in its future.

More young women than ever are entering the industry with post-secondary educations. This will undoubtedly help improve salmon farming from the ground up, while adding more balance to leadership roles.

Michelle Franze is one of those young women who is newer to the industry. She has a degree in Marine Biology from Dalhousie University and is currently the Communications and Community Manager for the BC Salmon Farmers Association (BCSFA). She is also the director and co-founder of the BCSFA’s new Youth Council.

“More women are advancing their skills and education in science and technology and this industry is built on both,” she says. “I think the opportunities for women to grow into management roles and work their way up will also come much quicker compared to other industries as the room for growth of the industry in Canada is huge.”

So, how do we get there?
“For change to happen, the companies and leadership need to make a conscious effort to confront the unconscious gender biases that exists,” says Richelle.

For Jody, she wants to see more women in management to provide balanced views at the decision-making level, while investing in retainment of women via flexible returns from maternity leave and mentorship programs.

Michelle wants to see government support of salmon farming to provide job security to those women considering the industry for a career. She also believes adding aquaculture to school curriculum will inspire young girls to work in salmon farming by a younger age.

“Women need to help women,” Maureen says. “If a woman is in a hiring position, she should tip the scales and hire young women that can be mentored to learn the role.”

“Women are flexible. We are warriors,” she adds. “We will continue to forge a path forward for the other women following us. Do not be afraid to kick out that glass ceiling.

Katie Maximick is the Community Relations Specialist for Grieg Seafood BC. She was born and raised in Comox, British Columbia, and grew up fishing with her father off the coast of Vancouver Island.