Kudos to new methods, but don’t count traditional salmon farming out yet

From open-net-pen farming to RAS to offshore, experts discuss the future of salmon farming 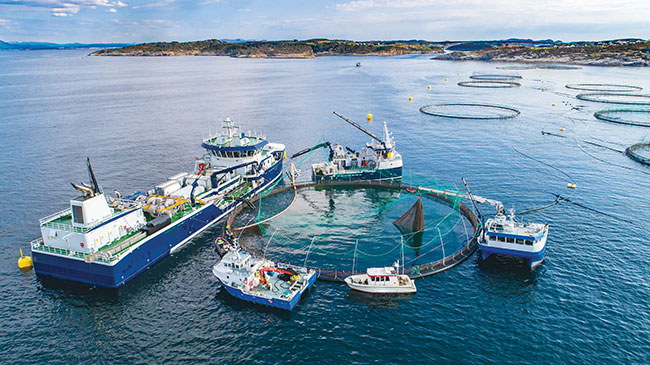 Even as offshore farming’s profile got a big boost in August following the “exciting” announcement of a landmark deal that will create cutting-edge offshore farms, conventional salmon farming will remain the main source of product over the next decade or so, according to experts.

But the experts, speaking at the virtual Salmon Forum 2021 hosted by IntraFish last fall, tempered their optimism about conventional salmon farming because there are challenges to overcome if it is to continue to grow and thrive. Open-net-pen farming is “about to reach the kind of the volume that you can expect to get out of it, unless we are able to deal with the sea lice and pathogen issues that are prone in the sea,” said panellist Jon Hindar, former CEO of the Cermaq Group.

But farming in the depths of the sea, which is still very much in pilot mode, also comes with its own sets of issues. Going offshore, Hindar suggested, may not shield operations from sea lice because they are, after all, “dealing with the same fish, with the same biology” that open-net-pen farmers are dealing with.

“If you have large concentration of fish offshore you may expect the same development (sea lice problem) that we see in open farming in the fjords,” said Hindar.

He said, however, that offshore may be “off to a better start” in terms of positioning itself in the public eye from a sustainability standpoint because accusations against conventional farmers that they pollute the oceans and overuse antibiotics for instance, while undeserved, are unfortunately sticking in the public’s mind. He said the industry has been “very ineffective” in countering this public perception.

Nonetheless, he thinks the creation last August of a joint venture company between Aker ASA and SalMar ASA that will focus on offshore farming is a “very exciting development.”

“If anyone is going to pull this off, I guess that should be SalMar,” says Hindar, referring to the company behind the world’s first offshore fish farm, located in Norway.

Drivers of investment into offshore farming
The panellists said recent investment in offshore aquaculture is driven by the influx of “new competence” into aquaculture from the declining oil and gas sector, whose players are well versed with navigating the same harsh environments to which offshore fish farms are subject.

Another driver is the Norwegian government’s support, which gives investors the confidence to invest in new technologies.

“We shouldn’t forget that the Norwegian authorities have given some help in taking the risk of developing this kind of technology by issuing these development licenses. That has catalyzed a lot of innovation, [pushing it to] a different scale than we would have seen if it wasn’t for this kind of ‘risk-relief,” said Einar Wathne, former CEO of aquaculture feed specialist Ewos.

He said fish farmers can expect a new era of regulations along with the development of offshore farming. Indeed, Norway has recently announced its intention to review aquaculture licensing regulations to make them more responsive to the industry’s changing landscape.

Another driver of investment into offshore farming is the “stable earnings history” of the salmon farming industry over the past decade, which hasn’t always been the case, said Atle Eide, former CEO, Marine Harvest (now Mowi). He said this has attracted “a new type of investor.”

The time of RAS will come
Despite the misfortunes over the summer of land-based aquaculture pioneer Atlantic Sapphire, the panellists acknowledged recirculating aquaculture systems (RAS) as a potential component of future production.

Farming in RAS is a work in progress and early investors in it have been “excessively brave… at least for my risk-taste,” said Hindar.

“I have looked at a number of land-based projects have found some of them very well thought through; but many of them pretty naïve, overlooking a lot of the difficulties. So I have a kind of a dualistic view on it,” he said.

Like Wathne though, Hindar believes the time of RAS will come, likely in a 10-year horizon when the industry has mastered the technology.

Wathne sees leading names in conventional salmon farming who have been “skeptical” or perhaps rightly prudent about the technology to join the RAS bandwagon in the “second wave” when they would have learned and built on their knowhow on producing large smolt in RAS.

As customers seek greener food supply, conventional salmon production will benefit from new technology, said the experts. Calling it “cage farming 2.0,” Wathne says smart salmon farming is underway but there’s still many tools that have not even been applied yet.

These “can address some of the criticisms of the industry as they will take care of some of the discharge from the open systems, address sea lice, help improve the environment,”  he added.

“There is say a bright future for the traditional salmon farming, but we will have to deal with the environmental challenges which are also for real,” concurs Eide. “The biggest limitation (of conventional farming) is the license to operate.” We have to address society in a better way.”