A visually appealing fish and short time to market are just some of the pluses of raising fish on land, says America’s sole producer of RAS-raised European seabass 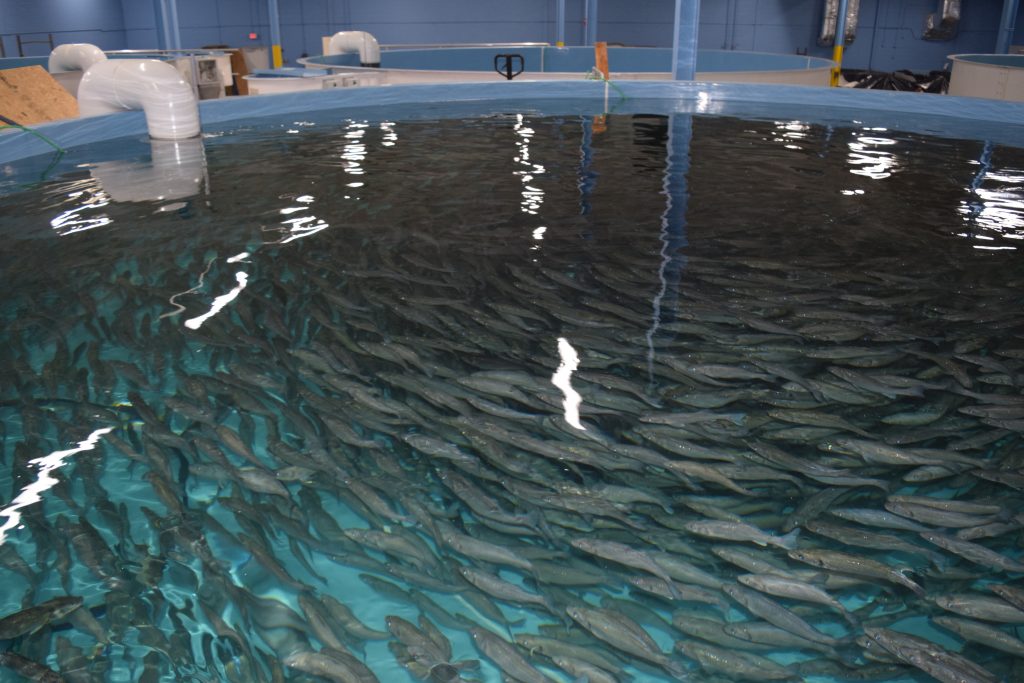 It’s been a while in the making, but Great American Aquaculture of Waterbury, CT has test-marketed some of its first fish and expects to be in full production by the end of the summer.

In side-by-side tastings with imported product raised in open-net pens in the Mediterranean Sea, he says Ideal Fish stood out. “We have had really strong reviews,” says Pedersen.

He says Idea Fish are, at most, sold within 24 hours of harvest. The Mediterranean product, he says, could have taken up to a week to arrive and it will have been handled several times along the way. “Ours is a bright shiny fish that’s visually appealing and identified by our brand on the gill tag. The tag has a QR code for full traceability, allowing the customer to see when the fingerling came into our plant right up to when it was harvested and shipped. This is what customers want now.”

Branzino is a high-value and popular fish in the US, with 17 million lbs imported in 2017, mostly from Greece and Turkey. Pedersen says it’s what attracted him to the species, and the higher price point should allow him to recoup the extra costs of raising them on land.

He aims to produce 140-150 tonnes or around 330,000 lbs of fish annually. With a target weight of around 1&1/8 lb, that will be about 5,500 fish a week. “Our sweet spot is a little larger than the 400-gram size the European market wants. We have designed our production for an even supply throughout the year,” says Pedersen.

Fingerlings are flown in once a month from Europe, primarily from a French hatchery. They are transferred to the first of four rooms, each with three nursery/quarantine tanks of 40 cubic meters. Each month they move up through the system with one room of tanks going off to grow-out and one new shipment coming in. “We keep the nursery densities fairly low; somewhere below 25 kg per cubic meter,” he says. For grow-out, the fish are distributed across 12 92-cubic meter tanks, and are moved up to a maximum density of 80 kg per cubic meter.

“We’ve had very good luck with these fish. They are adapting to RAS, but you have to feed them well, or they will be cannibalistic.”

Pedersen says grow–out period is eight or nine months once they are out of the nursery. “We harvest about a quarter of a tank at a time,” he says. Fish go off to smaller purging tanks for a week, are chill-killed, processed and packed in 10-lb boxes on site and shipped directly.

A small customer list of only one or two dozen means the company only needs one truck and perhaps a small van. Being situated half way between Boston and New York gives them access to the largest seafood market in the US. ““We are a local farm-to-table distributor. We have sized our production so that if we wanted, we could sell it all in New York City.”

The state of Connecticut has other assets besides location. “The state welcomes and supports manufacturing and has a lot of infrastructure in place to sustain that,” says Pedersen. Indeed, Ideal Fish is in a converted warehouse, water comes from a robust municipal system and water discharge goes to a municipal treatment plant. The company pays for the waste treatment, but it didn’t have to build the plant.

Pentair Aquatic Eco-Systems is a financial and engineering and equipment partner in the company. It custom-designed the RAS system to suit branzino. “This is the first commercial-scale saltwater RAS system that Pentair has built,” says Pedersen. “We did a lot of research into the specific water chemistry needs of branzino, the stocking densities and water flow rates, to ensure a top-quality fish. They can take a lot of credit for getting me to where I am now.”

Synthetic sea salt is used to prepare a brine mix that is housed in six 8,500-gallon reservoirs. The entire water system is roughly a million gallons, with around 2-percent discharge/day. Heating costs are minimal. “Electricity is approximately 20-25 percent of production costs before fixed costs,” he says. Branzino sleep about six hours a day, allowing the company to conduct some electrical tasks at night, such as running foam fractionators, when electricity costs are lower. “We can adjust our use times to avoid peak demand charges.”

The water is room-temperature and the pumps from the system keep things pretty warm. Branzino thrives in 26ºC in the nursery and 23-24ºC in grow-out.

The fish are fed a specially formulated marine diet that contains about 50 percent protein and all BAP-certified fishmeal and fish oil. With an FCR of 1.5, branzino are not quite as efficient converters as salmonids, Pedersen acknowledged.

The de-watering technology that Ideal Fish uses to process their solids takes out more than 50 percent of the salt content and that, they believe, will allow them to run an 8,000-sq-ft decoupled aquaponics system. “There’s huge demand for local organic salad greens and culinary herbs throughout the winter. This will be a fall project for us and we expect this product to contribute substantially to our business.”

The company also plans to build a local cluster of four or five plants about 10- to 15-minute drive from each other to mitigate risks and take advantage of economies of scale for supplies, and manpower, where technical staff work in more than one facility.

Farming more than one species is also a possibility, Pedersen says, to diversify the company’s revenue source and protect itself from price swings. “There is some great work being done with red snapper and we are looking at yellow tail and arctic charr as well,” he says.