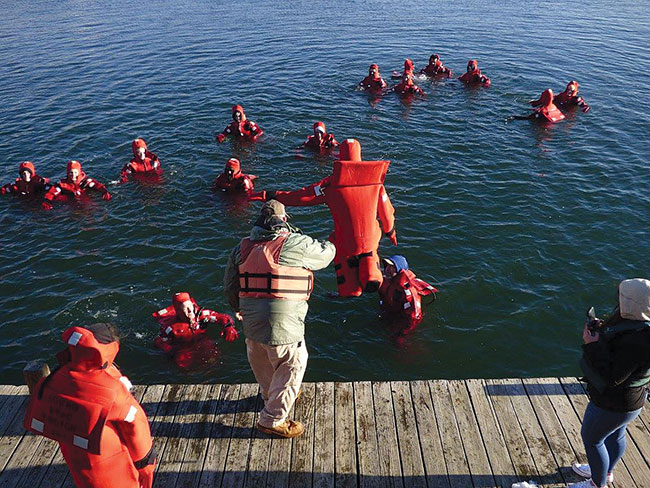 The maritime school trains students on how to put on an immersion suit correctly and get comfortable in them in the water Photo: The Sound School

The tide was coming in as four teenagers in full scuba gear approached what looked like a giant, concrete wiffle ball. Attaching it to a lift bag, in unison they moved the 150-pound object out into Connecticut’s New Haven Harbor, then began swimming to their destination. As they slowly deflated the bag, the ball sank eight feet to the bottom.

This curious scene marked a milestone for students at the Sound School, a comprehensive regional public high school specializing in aquaculture and agriculture. While the goal of this ongoing project is to restore once-flourishing oyster habitat, the students themselves gain both hard science skills and traits employers covet —accountability, problem-solving and teamsmanship.

For aquaculture leaders wondering if educators can help produce the workforce they need, a surprising part of the answer may lie in the type of experiential learning this high school is pioneering. It probably doesn’t look like your alma mater.

Founded in 1981, the Sound School sponsors an array of student-directed projects that buzz throughout five buildings and out on to the waterfront, which harbors a 40-ton US Coast Guard certified vessel. In a lab’s recirculating aquaculture system, students have raised sea bass, cobia, black trout, barramundi, and red snapper. 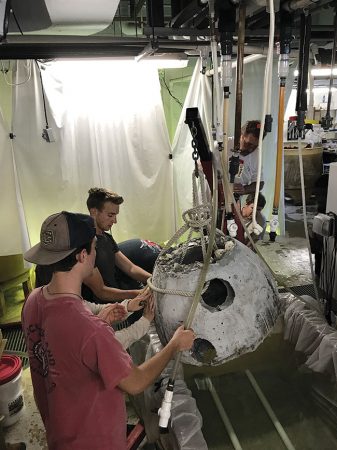 Students at the Sound School in New Haven, Connecticut place a reef ball into a tank for oysters to set. The school teaches marine sciences and trades to students from 8th grade and up Photo: Peter Solomon

Numbering around 340, students master core academics and then, as juniors and seniors, select concentrations in such areas as aquaculture life sciences, biotechnology, environmental and underwater systems, and marine trades.

“What really sets us apart is not only the comprehensive nature of our school, but how much responsibility we put on the students,” says teacher Pete Solomon. “So, they don’t just come in and feed the fish. They have to be 100 percent responsible for every aspect of running that system.”

Take the reef ball project, for example. When the fiberglass molds arrived, Solomon stepped to the side as the students read the manuals and reached out for support from the Reef Ball Foundation and Reef Innovations, which had donated the materials. After assembling the molds (which required some troubleshooting since the first one broke), they created the dome-shaped structures — a process of inflating a ball inside the mold and pouring a cement and oyster shell mixture in between.

They then worked with another group of students, which had been spawning Eastern oysters, and put their finished reef balls in a tank for the spat to set. Getting things done through and with other people is a lesson unto itself.

After deploying the reef balls at the restoration site, students used quadrats and transects to measure oysters, analyzed fish assemblages, and collected data. They also did water analysis. “So, there are the hard skills,” says Solomon.

The reef ball project is only one example of the approach at the Sound School, where students not only learn by doing, but by reflecting on what they have done. Regardless of the concentration or project, Solomon says, “Accountability is huge.”

Aquaculture practitioners have to agree: that sums it up.