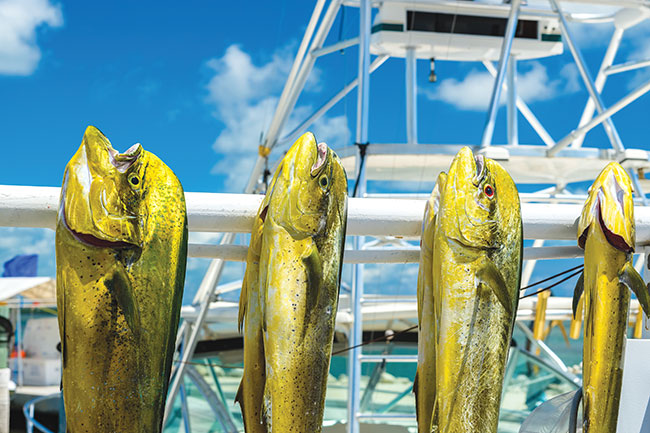 To date, the mahi-mahi in the market is wild catch. US researchers are still trying to address bottlenecks in culturing the species PHOTO: © Fotoluminate LLC / Adobe Stock

In many ways, mahi-mahi (Coryphaena hippurus) seems an ideal species for aquaculture – it is tasty, it spawns rapidly and grows extremely fast. Mahi-mahi reaches a pound in weight within three months, a size that could take years for many other species to reach. The problem, however, is that with rapid growth comes rapid sexual maturation. This presents significant challenges.

A partnership between researchers at the University of Miami Rosenstiel School of Marine and Atmospheric Sciences (RSMAS) and Hawaii-based Ocean Era (formerly known as Kampachi Farms) aims to address this issue.

“We have made very solid progress with the technology,” says Dr Daniel Benetti, professor and director of aquaculture at RSMAS. “We have the technology to produce mahi-mahi, but economic viability still eludes us. The reason for that is certain biological characteristics of the fish that make it difficult.”

The problem with males
The fish’s rapid growth rate has driven many researchers to study mahi-mahi culture over four decades. In that time, Benetti notes, significant progress has been made in solving a variety of environmental and nutritional issues. But the aggression and cannibalism of the mature male mahis remain a significant challenge.

“You cannot have two males in a tank because you’re only going to have only one left. Not only do the males go after each other, they destabilize the entire system,” he says. “If you’re going to raise these fish to market size, we can get to that. But we need to develop an all-female population and that’s what we’re targeting right now.”

Neil Anthony Sims, founder and CEO of Ocean Era, says that while the pursuit of monosex or sterile populations seems like a challenge, similar efforts to take males out of production are regularly undertaken in terrestrial agriculture.

“In sheep and cattle, you will castrate all the males,” says Sims. “This is something we’ve done in terrestrial agriculture for the very same reason. Males will always fight – roosters will fight, rams will fight, bulls will fight. And it makes them very difficult to domesticate. So, we’re trying to do with mahi-mahi what humans did with terrestrial stock 10,000 years ago.”

The current research sees the team at RSMAS capturing brood stock, getting spawns and shipping them across the country to be raised in Ocean Era’s hatchery. More experimental efforts will be underway at RSMAS’s hatchery by the time this issue sees print. Benetti says that if it is indeed possible to produce monosex mahi-mahi populations, he expects the team will be able to do it within the next two years. 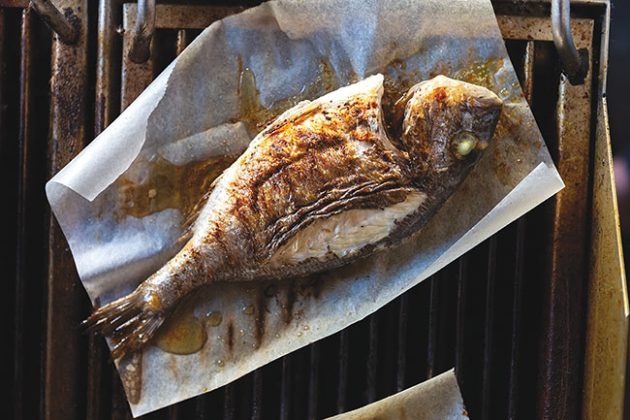 An easy-to-raise species
With these challenges, why pursue the species? Frank Baensch, a Hawaii-based marine biologist and owner of Reef Culture Technologies, says the benefits of farming mahi-mahi are very enticing.

In the first 45-50 days before the aggression issues start, mahi-mahi is the easiest pelagic fish to grow, he noted.

“Mahis are docile and they do really well in different types of conditions. You can have highly turbid tanks or clear tanks. You can raise them on rotifers and Artemia. They do best on an all-copepod diet, pretty much 100-percent survival. Their larvae is pretty much bulletproof compared most marine fish.”

The economic potential for mahi-mahi as an aquaculture species has not been studied. To date, the mahi-mahi in the market is wild catch.

“But if you looked at the size of the salmon market back in 1976, you would have said ‘well, there’s not much of a market,’” says Sims. “I think mahi-mahi has phenomenal market potential because it is efficient.”

In Benetti’s view, growing fish to plate-size and selling the entire fish would be much more effective and efficient than producing larger fish and selling it as fillets. He is disappointed that there’s still been no movement towards plate-sized fish.

“It looks like producers are being held hostage by the market,” says Benetti. “Nobody seems to be trying to develop a market for small fish.”

Benetti has been told repeatedly that “the American consumer has no desire for plate-sized fish,” even by his own research partner, Sims.

Sims says that while he gives Benetti his every blessing and endorsement to make plate-sized fish work, he sees more potential for larger mahi-mahi.

“There is already such a huge market for mahi-mahi across the United States desperate for more fresh fish,” says Sims. “I would like to be doing that with fish of a size that they’re already used to, rather than trying to talk them into trying this plate-sized mahi-mahi. Western culture likes a fillet. When you’re thinking about the broadest possible market appeal, fillet is far more attractive.”

Benetti is undeterred. He noted America has large immigrant populations from Latin American and Asian countries, where plate-size fish are much more common. He remains focused on ensuring that mahi-mahi aquaculture is commercially viable, one way or another. “If we can produce monosex populations, we will resolve the remaining bottleneck for the commercial viability of mahi-mahi,” he says.