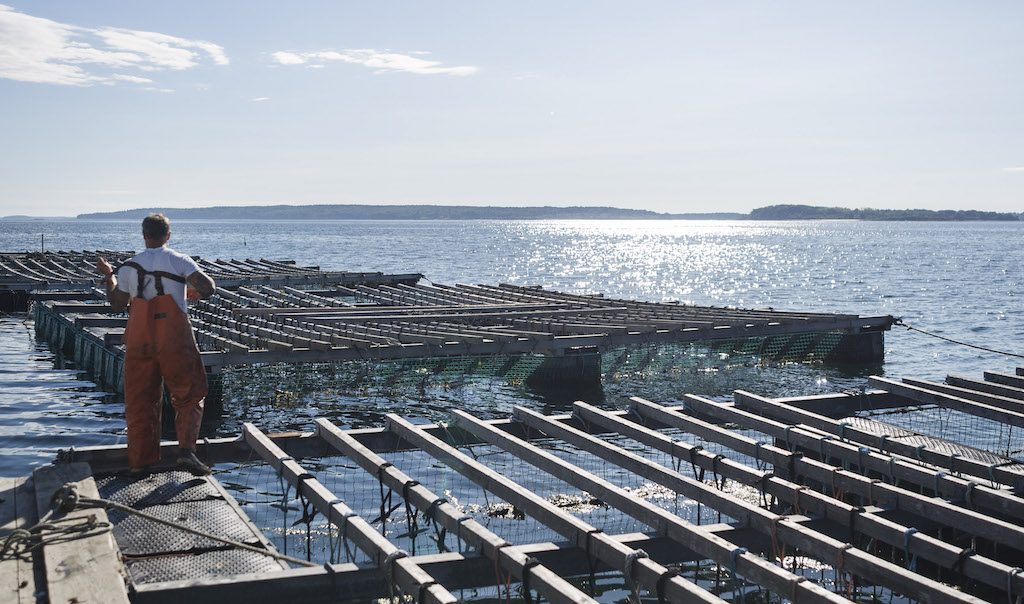 Bangs Island Mussels started with three rafts six years ago. It now has 10 rafts holding 400 long lines Amid challenges posed by predators and the unpredictable environment

A son-and-pop partnership is cultivating mussels suspended in rafts floating in the waters of the Casco Bay, in the Gulf of Maine, guided by the principles of environmental sustainability. “My father and I have both been interested in aquaculture for a long time, but what attracted us to Bangs Island Mussels was that it fit with our values of harmony with the environment,” says co-owner Matt Moretti.  “We wanted to do aquaculture in a way that didn’t hurt nature around it, and potentially help the environment too.”

“Mussel farming is all that,” says Moretti.  “It’s the most sustainable and low-impact way of producing food I have ever heard of. They’re a filter for the ocean.  We don’t add chemicals, we don’t use freshwater, we don’t have a lot of waste, everything is reusable like our lines, and the rafts will last for decades.”

The company has been around since 1999 and Matt and his father Gary, purchased it six

years ago.   “We bought it from the original owner which is actually somewhat rare in Maine, as opposed to starting your own farm,” he says.  “It speaks to the evolution of the industry in that it is older and more mature and becoming more valuable.”

“It was operating at a pretty small scale so we made it our mission to grow as quickly as we can,” Moretti explains.  “Dad and I reinvested everything we could into the company and we grew the business to where it is today.”

They started with three rafts, one lease site, a barge and a skiff. Now they have 10 rafts, two lease sites, the barge and a larger lobster boat.  “In the beginning it was myself and one employee with my dad helping out,” says Moretti.  “Now we have grown to three full-time employees and about six part-time.”

The two sites with a total of 3.66 acres in Casco Bay, northeast of Portland Maine, are leased from the state.  The 10 rafts are 40-by-40 foot square.  Each raft can hold 400 long lines, 35-feet long. “The sites are actually quite small for the amount of mussels you can produce,” says Moretti.

Each raft is wrapped in protective netting to keep out the voracious eider ducks. “They can eat their body weight in mussels in a single day,” Moretti says.

“We have managed to squeeze in two kelp long lines on the site and we will be putting in a scallop long line in the next couple of weeks,” Moretti says.  “We have actually been doing kelp for about five years.  It’s a great example of a high-quality delicious food we can produce, that doesn’t impact the ocean.”

“It has been a dream of mine to get some IMTA (integrated multi-trophic aquaculture) going,” says Moretti.   “Recent studies show that kelp culture alongside shellfish culture can actually benefit both.  The kelp get extra nutrients that they need from the mussels and mussels get a Ph buffering effect from the kelp.”

Recently, a number of Maine growers had the opportunity to go to Japan to study scallop-farming methods. (A story on the efforts to bring the Japanese ear-hanging technique to Maine appeared in Aquaculture North America, September/October 2016, page 1.)  “I learned all about the ear hanging [method] and we are pretty hopeful we can adapt their methods to the Maine environment and grow the scallop industry here,” says Moretti.

The scallops, like the mussels, are a natural set.  “People have been using a natural set in Maine probably for 25 years,” Moretti points out.    “We have an abundant natural resource and we have never had to go the hatchery route.”  There is some research work being done with mussel hatcheries in the area, he adds.

“Because of the timing of mussel farming we are actually increasing the natural resource,” Moretti explains.   Mussels mature and spawn before they are large enough to harvest.  “We can collect seed on our lease sites underneath our rafts well protected from the elements and predators that would affect them in a more open environment.”

Scallop seed is collected further offshore with a permit.  “It works a similar way, in that you collect the seed and protect it and you have a much higher survival rate than you would in the wild,” says Moretti.  “And it is certainly not impacting the wild population.”

“We work pretty closely with our governing body, the Department of Marine Resources,” says Moretti.  “It’s a good relationship.  Both sides are trying to make things better for the industry.”

Aquaculture is still quite small in Maine, Moretti says.  “There is a lot of excitement around aquaculture right now.  There are a lot of growers starting out, particularly in oysters and kelp.  Aquaculture is certainly a way of supporting economic improvement in less affluent communities on the coast.”

Current harvest is 200,000 pounds a year, with an 18-month grow-out.  “We just added three new rafts, so we will see how it turns out when we are going full scale,” Moretti says.  “Right now we are harvesting about two times a week.  In the summer we might pick it up to three times a week.”

He says they have a few different distributor/wholesalers with about eight customers in total.  Most sales are direct to restaurants, although there are a few retail stores that carry Bangs Island Mussels.  “We have the Bangs Island brand name and I think it’s pretty strong.  It’s a part of what we do,” Moretti says.  “I understand many of the restaurants put our name on the menu and it helps with sales.  We are not just mussels from Maine.   People have come to realize that the brand means quality and a method of production they can get behind.”