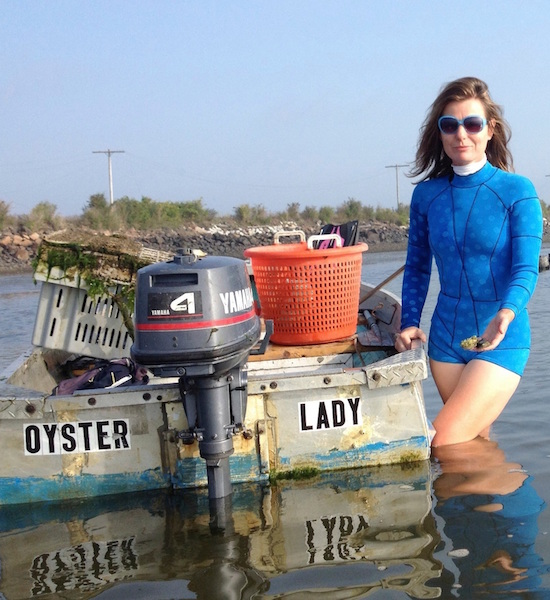 The Maine Oyster Trail, which originated in an informal blog by Catherine Schmitt, Communications Director of Maine Sea Grant, will formally open this summer with over 40 restaurants pinpointed as purveyors of Maine-grown oysters, shellfish retailers, and two opportunities for tours of oyster farms.  More tours are expected to be added during the summer.

Abigail Carroll, owner of Nonesuch Oysters, located in Scarborough, has been offering tours of

her farm for years that include visiting and learning about all phases of raising oysters including in an upweller and on the growout site as well as a lesson on oyster shucking.  Nonesuch Oysters is a 65 acre farm that hopes to produce 500,000 to 700,000 oysters annually by 2017.

This year, as a result of revised state legislation, Abigail Carroll and other shellfish farmers in Maine will be able to offer fresh oysters from their farm directly to participants on the tours.  They will be subject to the usual stringent health regulations.

Further up the coast, Damariscotta River Cruises, which leave from Schooner Wharf in Damariscotta, offer varied experiences with aquafarms along the river.  They include informational talks about the farms, oyster tasting and meeting various farmers on-site at seven oyster farms along with wildlife viewing.

Sebastian Belle, Director of Maine Aquaculture Association (MAA), who has worked with Schmitt and Dana Morse of Sea Grant to create a formal web site for the trail, says the listed restaurants have supporting materials about the oysters they offer, with information about where and how they are raised and what makes each unique from the other.

Earlier this year, he says, MAA received a “fabulous response” when they presented the Oyster Trail, along with Maine oyster tasting, to over 150 international tourism operators who were in Portland for the 20th annual Discover New England Tourism Summit and International Marketplace.

Maine Oyster Tour information and tour map can be found at http://www.seagrant.umaine.edu/blog/oyster-trail-update.