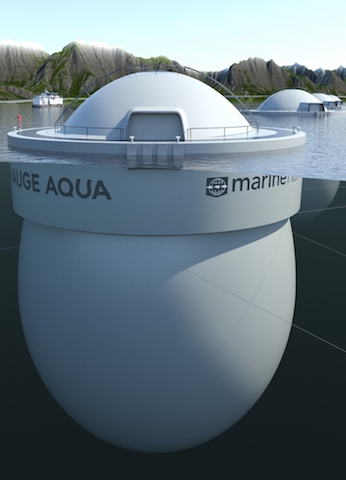 The new pen tech called “The Egg” was unveiled at AquaNor 2015. It is designed to enclose salmon in an egg-shaped geometric dome. The shape provides a seamless double curved surface. Ninety percent of the tank is submersed at all times, while ten percent is above

the water and filled with air. Inside the tank, a central tube is placed and stiffens off the structure vertically, according to Hauge Aqua.

Marine Harvest says, if successful, the new technology marks a new technological path for the salmon-farming giant that would potentially be rolled out globally in the company’s salmon farming operations in North and South America and elsewhere in Europe.

Subject to the agreement, Marine Harvest applied for 14 development licenses, an instrument established by the Norwegian Government to fuel investment into major technology shifts in the industry.

Each platform is 44-meters tall and 33-meters wide with a capacity to grow 1,000 metric tons of salmon. It is also expected to prevent sea lice exposure, a common problem when farming salmon in traditional open pen farms.

“We have seen a substantial rise in production costs over the last years. This is mainly due to sea lice and escapees. This concept is very exciting. If we succeed, today’s challenges with sea lice and escapees will be history. Simultaneously, this lays the foundation for a sustainable growth along the coast,” said Marine Harvest CEO Alf-Helge Aarskog.