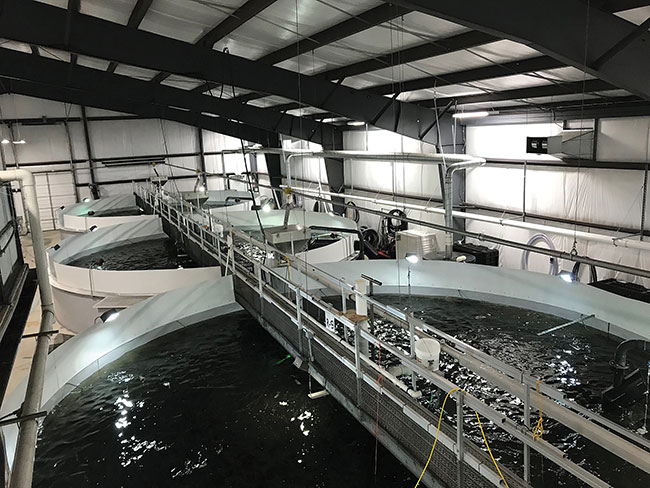 Commercialization of salmon grown in RAS facilities and how they perform in cost and price are two key developments to watch in 2021, says Rabobank.

The Dutch bank says this will determine how much capital ﬂows toward them in the future.

In its” Global Animal Protein Outlook for 2021” report, it noted that large-scale recirculating aquaculture systems (RAS) facilities that have produced some of their ﬁrst salmon harvests in the second half of 2020 are expected to scale throughout 2021.

The report sees 2021 as a year for recovery for animal protein production. It says there’s an opportunity for RAS-based salmon to ease its way into the market, as salmon demand continues to strengthen amid the COVID-19 pandemic.

Renewed consumer interest in cooking salmon at home, particularly in the Americas and Europe, saw salmon demand grow between 3 to 4 percent in 2020. Although currently sold at lower price points, salmon is expected to further recover as the food services industry gradually reopens and price expectations starts to lift, says the report.

Concurrently, Rabobank foresees salmon supply to expand marginally from 0.5 percent to 2 percent in 2021, much lower than demand growth or historical supply growth. This means the industry will not meet the sustained increase in demand for salmon this year as supply is expected to contract from 8 to 9 percent due reduced smolt production in Chile, which impacts key markets such as the United States, Brazil, and Russia.

“Operational risks still exists,” says Beyhan de Jong, analyst at Rabobank. “Volumes in the near term will depend on how leading projects like Atlantic Sapphire will progress and perform.”

Long-term outlook
Rabobank has identified over 50 publicly announced RAS-based salmon projects globally, in its 2019 report “Aquaculture 2.0. RAS is Driving Change.”  The projects are estimated to produce a combined total of more than 700,00 metric tons within the next decade, which represents up to 25 percent of the expected growth in the total salmon supply to 2030.

Reluctance among early adopters to scale their RAS-based salmon production is expected. Not only is the system more capital intensive than other conventional aquaculture systems – roughly 10 to 15 percent more expensive than marine farming, says Rabobank – there are also other issues farmers need to contend with. It could range from difficulty in obtaining licenses and technical failures to various environmental and biological challenges including mortality, diseases and decreased quality of salmon produced.

To succeed, RAS salmon projects should achieve its ambitious target harvest levels of 500,000 metric tons. Rabobank suggests the sector will succeed in finding a niche market if it can produce salmon around NOK40 ($4.66) per kg to NOK50 ($5.82) per kg even with less-than-expected production volumes.

RAS success would also depend on how open-net-pen salmon farming manages the biological and environmental challenges it currently faces, such as sea lice infestations and other diseases, it said. When these issues remain uncontrolled, it would create an opportunity for land-based salmon to enter the market.

The location of successful RAS farms will also be crucial to the growth of the sector. Rabobank argues that achieving market share of 10 percent among large salmon producing countries such as Norway or Chile would have a small impact; however, but if the same is achieved in markets where there’s no salmon production, for instance China, such achievement could change current trade dynamics.

“We believe that every project is unique and needs to be evaluated separately. There is a high chance that some of these projects will succeed if they have at least half of the key success factors regarding the species and location selection,” says Rabobank. 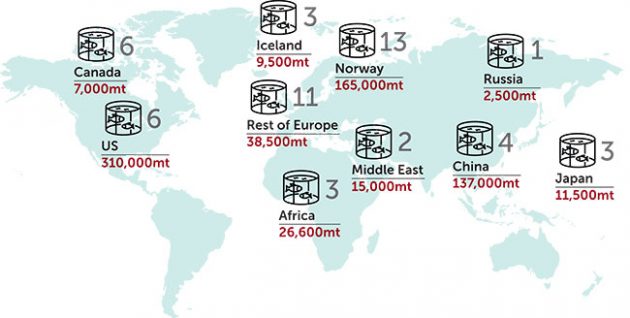 Beyond salmon
Currently, the focus of RAS is on high-value, premium, and niche products, such as salmon and, to a limited extent, kingfish, sole, sturgeon, turbot, barramundi, and steelhead. (See page 14 for a US company’s attempt to use RAS to grow shellfish.)

“With technology advancing, there might be opportunities for other seafood categories as well in the future, although the focus will always be on the categories with a higher price point for some time. Successful RAS operators will be pioneers in what could be a new and booming aquaculture industry,” Rabobank says.

For those in the salmon industry and other aquaculture value-chain operations, now is the time to decide if they should invest in RAS or invest to ensure they stay ahead of RAS, as this technology matures, grows, and disrupts the market,” suggests the report.