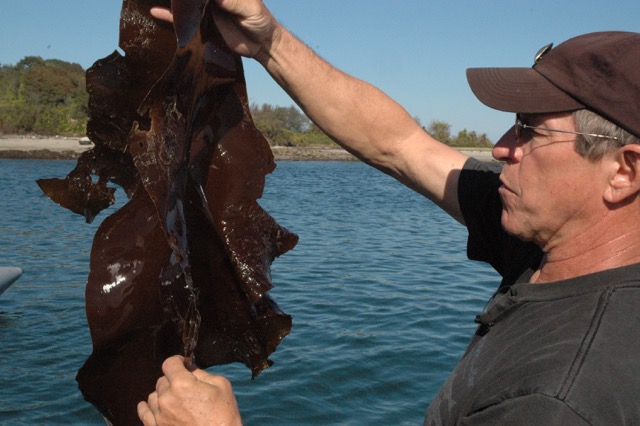 Sportsfishing boats bob on the surface of a once-productive region of the Puget Sound, their crews hoping for a nibble or strike from passing fish. But from one of the boats, the fishing “line” slicing through the water is slimy brown and covered in tiny plant spores. A diver slips underwater and anchors the line to a buoy about 10 feet under the surface. This slimy living twine could be the key to turn things around in this area.

The Hood Canal project funded by a Paul Allen Grant is the first of its kind on the West Coast to investigate the potential of kelp to combat ocean acidification.  The first kelp seedlings of a five-year project were unfurled into Puget Sound’s Hood Canal in Washington this spring. The spores, or sori, are raised in tanks at NOAA’s Manchester Research Facility. Scientists from NOAA and the Puget Sound Restoration Fund will monitor the kelp and surrounding waters over time to gauge it’s efficacy at taking up carbon dioxide from the water column.

Excess CO2 is the main culprit behind acidification and lowers the pH of ocean waters when levels are high. Due to upwelling and stratification the Puget Sound has a long history of ocean acidification issues. Acidification can cause huge problems for the shellfish and fishing industry in otherwise productive areas, causing the tiny shells of pteropods, a main source of food for small fish and salmon, to dissolve.  Newly forming spat of baby oysters and clams also suffer from shell malformation and cannot grow properly. The young kelp can act as a natural sponge to take up excess CO2 that it uses for photosynthesis and growth. The native bull kelps can grow as much as 10 inches a day and grows to full maturity in one year.  Along with its buffering capacity, kelp beds create vital habitat and shelter for fish and invertebrates, and new research from NOAA’s Harmful Algal Bloom Program shows that macroalgae such as eelgrass and kelp harbor bacteria that fend off the growth of toxic algae that cause algal blooms.

Sustainability is a large focus of this current project, and the project has strived to find a viable commercial market for the harvested kelp. The kelp can essentially be thought of as an agricultural product, but with some key benefits over traditional farming. “Macroalgae aquaculture is an area a lot of the world is looking into,” explains Mike Rust, head of Aquaculture Activities for NOAA. “The biomass does not require fresh water, special nutrients, or even a land mass, and has a built-in resiliency against climate change like drought, floods, or temperature fluctuations.”

Slow to find a commercial foothold on the west coast, commercial kelp production is growing rapidly on the Atlantic seaboard where growers in Maine have been cultivating it successfully for several years (see ANA Jan/Feb 2016.)

And while we might still be a long way from seeing macroalgae beds replace sweeping fields of corn and wheat, there has recently been a strong push to get more of this local, sustainable healthy sea vegetable into diets across North America.  Ronald Johnson, manager of the Northwest Fisheries Science Center Aquaculture Program, has been looking at commercial markets here on the West Coast. “It’s a fresh, local, sustainable product that we can produce with consistent quality and it makes sense to find a domestic market for it.”

Besides the bull kelp project, NOAA has been experimenting with tumble- cultured macroalgae grown year-round in tanks at Manchester. The three varieties they are testing: ulva (green), dulse (red) and Turkish towel (red), all grow incredibly quickly and double or triple their weight in a week’s time. This makes for a market-ready product that can be harvested every two weeks or less. The algae contains many important nutrients that humans need in their diet, like potassium, iodine, and omega-3 fatty acids. For vegans and vegetarians looking for a protein-rich alternative to meat, Johnson points out that not only can the algae be up to 20-percent protein, but many varieties contain large amounts of taurine, an important mineral found in meat and fish that is absent in soy beans and soy products. Taurine is essential for cardiovascular function, and development and function of skeletal muscle.

But what about the taste? Recently twitter was abuzz with the “tastes like bacon” quote taken from another researcher-turned-macroalgae-farmer Chris Langdon, a Professor of Fisheries at the Oregon State University.  Langdon had been growing dulse to feed the abalone he was studying when approached by the business school on campus. Their idea was to take the dulse to the college’s Food Innovation Center to find a tasty way to prepare it in foods. With the help of local chefs, one idea was to fry the dulse and crumble it as a garnish for salads, and Chris got the surprising feedback that when dried and fried, the dulse tasted like bacon. A prominent James Beard award-winning chef now has dulse as a featured menu item at his restaurant in Portland. Other dulse products the Innovation Center are looking into include juices, salad dressings, and snack foods. There has even been a movement to use algae in alcohol. NOAA’s Mike Rust calls it “seashine” and has recently tried both seaweed infused beer and gin.

Right now all areas of marketability are being investigated. “There’s a hierarchy of the market based on price and demand, first chemicals and drugs, then food and beverages, down to fertilizers, animal products, and even fuel,” says Rust.

Fuel is an especially promising market. There is a hope that if algae can be made into a biofuel it would not only reduce our dependence on oil, but it would also help offset CO2 emissions from oil products.

The other part of the sustainable equation for macroalgae aquaculture besides providing a local, healthy product for consumers comes from the idea of polyculture.  Integrated Multi-Trophic Aquaculture, or IMTA, is a variation the theme whereby  fish such as salmon are grown in ocean pens alongside kelp and  bivalves. Waste from the fish provides nutrients for the kelp and bivalves  which filter out nitrates from becoming excessive and harmful to the water column, and alleviates the need for adding additional fertilizers to the algae. And because macroalgae is known to take up CO2, shellfish farmers are looking at growing the algae near their existing shellfish beds.

Using kelp as “phytoremediation” around struggling shellfish beds is the next logical step for Maine, the first east coast state to address ocean acidification by using kelp. Within the first 10 days of monitoring the water parameters around a newly planted kelp farm in Casco Bay earlier this year, the CO2 levels were significantly lower within the farm.  At the time, the young kelp were still small, only 14-inches long. If the trend continues as expected, the researchers will look into the feasibility of co-locating algal beds and shellfish farms to improve the growing conditions for shellfish. Shell-forming organisms represent 85 percent of the value of Maine’s fisheries. Alaska is also interested in exploring macroalgae farming and is working with NOAA on design details.

So, the next time you eat a tasty oyster, salmon, or bite into a curious crunchy bacon flavor at your favorite restaurant, you could be tasting the benefits of the next wave of agricultural farming — algal aquaculture.

— Heather Wiedenhoft is a Research Associate at Washington State University.